StFX students will now receive two degrees when they graduate: one in Latin and one in Mi’kmaw.

The graduating class at St. Francis Xavier University were given quite a surprise at convocation this spring. Along with the university’s typical degree written in Latin, graduates also received a piece of parchment in Mi’kmaw, the language of the Mi’kmaq on whose land the Antigonish, N.S. university resides.

“I was shocked to have my degree written in my language,” said graduating student Jeneva Dennis, who’s from the Potlotek First Nation reserve.

“Getting the Mi’kmaw parchment made me feel very proud as an Indigenous student and mother. I was able to show my five year-old daughter that I achieved this degree,” she said, adding that she read the words out loud to her daughter. “It’s amazing to see that a university like StFX was able to provide this degree to me this way.”

The idea to translate degrees into the Mi’kmaw language was brought forward by Terena Francis, the university’s Indigenous student affairs coordinator. Ms. Francis, who is also Mi’kmaw, said she had heard that students wanted this for years, but it took a while for the initiative to get off the ground. “Over the last year, there’s been a lot of work and a lot of support for the Indigenous students in the Indigenous office on campus,” she said. Barbara Sylliboy, an Elder and linguist from Eskasoni First Nation, was “more than happy” to do the translation work, Ms. Francis added. 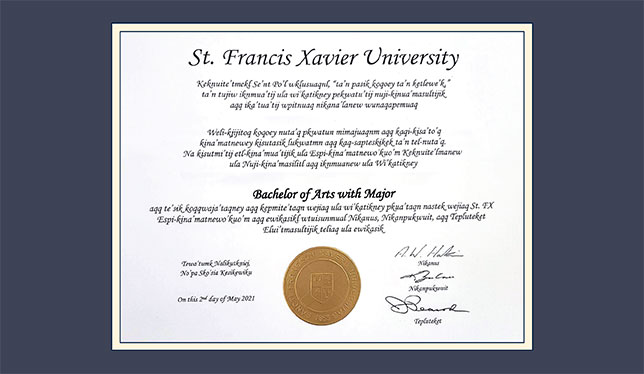 An example of what one of the parchments in Mi’kmaw looks like. Photo courtesy of StFX.

“The Mi’kmaw language on graduate’s parchments is a significant and very important demonstration of the university’s respect and honour for our shared treaty relationship,” said the university’s president and vice-chancellor, Andrew Hakin. “We are all treaty people and as treaty people, going forward, all graduating StFX students will receive two parchments – one in Mi’kmaw and one in Latin.”

He added that “this is an important step in the university’s ongoing efforts of reconciliation.”

The idea came to fruition with support and approval from the university’s senate, but was only announced by Dr. Hakin at the spring graduation ceremony. “I didn’t let students know at the time because I didn’t know if we could get it done before … spring convocation,” Ms. Francis said. “Because of the virtual graduation, students really didn’t have any idea about it.” She said the reaction from students was overwhelmingly positive. “Now we have students that graduated in the past that are able to contact the registrar and request that their parchment be sent to them in Mi’kmaw.”

Ms. Francis emphasized that the initiative is for everyone – all StFX students will automatically receive both Latin and Mi’kmaw parchments without having to request the Indigenous language.

StFX isn’t the first university to offer diplomas in an Indigenous language. In fact, Cape Breton University began to offer students the option of requesting their parchments in languages including Mi’kmaw, French and Gaelic – along with encouraging students to wear regalia at in-person ceremonies – in 2018.

There’s a lot of work being done in Nova Scotia to restore and preserve the language, Ms. Francis said, including initiatives like Mi’kmaw immersion programs and the Mi’kmaw Kina’matnewey education authority that works to improve the quality of education for Mi’kmaw students. Alongside this preservation work, “there’s a big push for treaty education within the province,” Ms. Francis added. “They’re doing a lot of work around treaty education, to ensure that the Mi’kmaw knowledge systems are being incorporated within [public school curriculum].”

Honouring the Mi’kmaw language this way is “part of revitalizing, it’s part of reconciling the relationships that we have,” Ms. Francis said. There aren’t many Mi’kmaw speakers left, so it’s incredibly important to use and learn from the knowledge of Elders to help with revitalization and preservation. And Ms. Francis thinks other universities should follow suit. “It’s very important that every university should be able to do this,” she said. “We have Indigenous knowledge keepers out there that have their language …  [and] have those skills to read and write and speak it and we need to utilize them.”

As a Mi’kmaw woman and a StFX graduate, Ms. Francis is personally connected to this initiative – and can’t wait to have her StFX diploma in her own language. “Just last year I graduated with my master’s and, to be honest, my diploma is sitting in a file folder. I’m going to ask to get it in Mi’kmaw. It’s going to make me feel that sense of pride,” she said. “Just seeing [my language] written is a beautiful thing.”