In mourning, universities memorialize the victims of Flight 752

One week after Ukraine International Airlines Flight 752 was shot out of the skies outside Tehran, campuses across Canada fell silent. At 1 p.m. Eastern time on January 15, universities held a moment of silence to mourn and honour those killed in one of the single heaviest losses of life that the Canadian academic community has experienced outside of wartime.

Of the 176 people on board Flight 752, 138 were connecting on to Canada; of these, at least 61 were directly affiliated with Canadian universities (see list below). According to figures compiled by Universities Canada, 41 current students and seven faculty members from 19 Canadian universities were killed in the crash, as well as alumni of at least another three. More than a dozen passengers had close relationships to people at Canadian universities – they were the children, spouses or parents to someone in the academic community, or would-be students flying to Canada with plans to study here.

Read also: The tragedy of Flight 752

In all, the Canadian Science Policy Centre estimates that 85 passengers had ties to this country’s science community – “an unbelievable, unbearable” loss, said the CSPC’s president and CEO, Mehrdad Hariri, who emigrated to Canada from Iran in 1996.

It was a sad combination of timing and happenstance that led most of the passengers to be aboard the flight in Tehran on the early morning of January 8, with plans to continue on to Toronto. Many were Iranians or Iranian-Canadians working or studying at Canadian universities who were returning after the holidays. The flight to Toronto via Kyiv was one of the most affordable and convenient options open to them.

When it was still night on Tuesday, January 7 in Canada, Canadians received the first news that a flight had crashed just after takeoff in Iran amid heightened tensions in the region. By very early morning on Canada’s East Coast, word had started to filter out that many passengers on the plane called Canada and its universities home. Three days later, the Iranian military released a statement admitting Iran had shot down the plane because of “human error.”

At universities, the shock began to set in even before the plane’s passenger manifest was formally released as victims’ names started to pop up on Facebook and Twitter. At the University of Alberta, president David Turpin received a text early that Wednesday morning from a staff member, saying that social media indicated several students were on board the downed plane. “In very short order, we had assembled the crisis team that took the lead in managing our response,” he said. 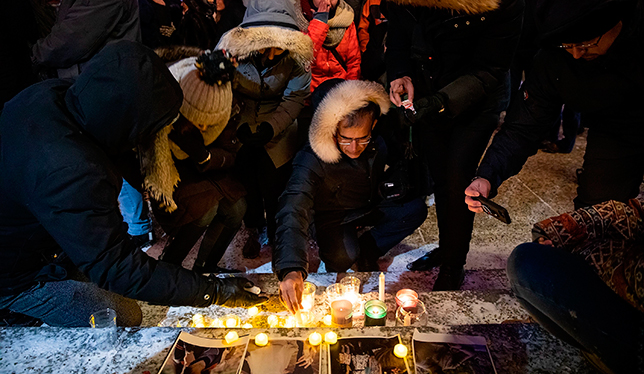 Mourners in Edmonton place candles and photographs during a vigil held for those killed when Ukraine International Airlines Flight 752 crashed after takeoff near Tehran on January 8. Photo courtesy of The Canadian Press/Codie Mclachlan.

By day’s end, it was confirmed that 10 students and faculty from U of A died in the crash, as well as three family members. Among the passengers were the husband-and-wife team of engineering professors Pedram Mousavi and Mojgan Daneshmand, who together oversaw research labs of more than 50 students. The pair had met and married in Iran, and moved together to Canada where they trained at the University of Manitoba and the University of Waterloo before Dr. Daneshmand was offered a Canada Research Chair at U of A.

“They were super bright, highly innovative, very, very hard working,” said their longtime friend and colleague, Safieddin Safavi-Naeini, an engineering professor who holds the NSERC/C-COM Industrial Research Chair at the University of Waterloo. He said the duo set the bar high for what research could accomplish – original, complex science that could solve real-world problems. They encouraged their students, many of them also with ties to Iran, to do the same, he said.

Outside of their labs, Drs. Mousavi and Daneshmand opened their home to students and encouraged mentees to reach out at all hours. Many called them “mom and dad.” The pair knew how hard it could be for newcomers from a different country – they too had struggled early on, said Dr. Safavi-Naeini. “Above everything else, they were kind.”

Universities are also dealing with the painful logistical tasks related to the number of empty places: organizing the dorm rooms of students who will not be returning, finding faculty to help students now without advisors, supporting families through what is proving to be a difficult process of identifying and repatriating remains, and hosting private and public memorials to honour the victims.

The federal government has been working with universities since the plane crash. Deputy Prime Minister Chrystia Freeland arrived at U of A on January 9 to meet with students, faculty and staff, and Prime Minister Justin Trudeau spoke at a nationally televised vigil in Edmonton. “They have been on campus with their response teams. They’ve been working with us in making sure that the needs of students and family are being supported,” said Dr. Turpin.

Numerous memorial scholarships also are being set up at universities across the country, including at U of A, which plans to endow two graduate student memorial awards. The Ontario government announced it too will create scholarships, each worth $10,000, in memory of the 57 Canadian victims on the flight; for its part, the federal government pledged to match donations, up to $1.5 million, to the Canada Strong fund, a charity established to help families whose loved ones were killed in the plane crash.

“There is this tremendous sense of grief and disillusionment at the cause of this, and a tremendous sense of loss in terms of potential. We have this desire to do something to help us look forward now in a more hopeful way,” said Rahim Rezaie, who helped spearhead the Iranian Student Memorial Scholarship Fund at the University of Toronto. U of T lost eight members of its community, including six students.

Dr. Rezaie, a U of T alumnus who works at the university as assistant director of the International Virtual Engineering Student Teams (InVEST) Project, said he hopes these scholarships will open Canadian university doors to students who, like many of those on the plane, overcame hardship to pursue their studies in Canada.

But those numbers mask some of the immense difficulties Iranian students face in Canada. Iran is caught in an economic crisis, with a rapidly shrinking economy, weakening currency and inflation running near 40 percent. The financial pressure amplifies the needs of students daily, said Dr. Rezaie. “There’s unquestionably a tremendous number of students who could use this support to come to Canada and to study and to make an impact,” he said.

Gina Parvaneh Cody, the Iranian-born engineer and Concordia University alumna for whom the university’s school of engineering and computer science is named, is the lead donor of a memorial scholarship fund for Iranian students being set up at her alma mater. This tragedy highlights “how vital international students and immigrants are for our universities, and how diverse Canadian higher education really is,” she said.

Dr. Cody said she believes that this tragedy could bring people from diverse backgrounds together to learn and to resist the increasing divisiveness in the world. Seeing the faces of the victims of the crash and hearing their stories “exposes the narrative of ‘us and them’ as an illusion,” she said.

Several staff and students at Canadian universities spoke with pride of the national reaction to the plane crash – that this was considered a Canadian tragedy rather than a misfortune experienced by those with ties to Iran. “It’s a shared grief that brings people closer and makes us more kind and considerate towards one another,” said Sadra Kord-Jamshidi, president of the Dalhousie Iranian Student Society.

U of T’s Dr. Rezaie, along with others interviewed for this story, said he’s received near-daily messages from around the world expressing sadness at the loss and appreciation for the national embrace of Canadian-Iranian scholars. “Home is not a place, it is a feeling, and thanks for giving Iranian students a second home outside their country,” one student wrote in a letter that Dr. Turpin read to University Affairs.

Mourning at Canadian universities continues and will for some time, said Dr. Summerby-Murray at Saint Mary’s. In a convocation address two weeks after the crash, he spoke of the prolonged grief at the university. The lasting legacy of students and teachers on flight 752 will be the accomplishments of students and teachers inspired by them, he said. “We have to do our best as remaining members of the community to take on the hopes and dreams of our two students and all others, recognizing that those dreams cannot be fulfilled in them.”

* A list of the passengers who had a current or recent connection with the university community in Canada.