Western University to head up the new program for Ontario, the first of eight such programs planned across the country.

“We see industry, health care, our justice system – so many different segments of the Canadian and international communities who have not had the privilege of understanding Indigenous perspectives,” said Chantelle Richmond, an Anishinabe scholar from Pic River First Nation and an associate professor of geography at Western University. 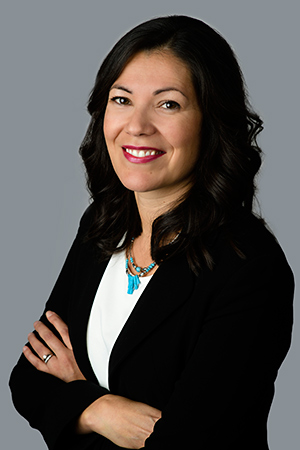 Chantelle Richmond is the program lead for the Indigenous
Mentorship Network Program for Ontario as well as an
associate professor of geography at Western University.

Dr. Richmond is the program lead of the newly launched Indigenous Mentorship Network Program for Ontario, the first of eight regional programs being launched across the country. The aim is to increase the number of Indigenous people working in the health field and boost culturally relevant research, with an emphasis on the health and social issues that matter to Indigenous people. The Canadian Institutes of Health Research announced in June 2017 that it would invest $8 million to create the network.

Dr. Richmond’s own work focuses on the relationships between Indigenous people and the environment. “We have been able to sustain our lives, our communities, our cultures for a really long time, in some of the harshest environments on Earth, because we were able to listen and fulfil our obligations to the land, but also to one another,” she said. “I think that’s really the root of our knowledge systems.”

Western will act as the hub for the Ontario iteration of the program, which counts 70 researchers – most of whom are Indigenous – from 13 postsecondary institutions. The program is “a brave step forward to take a stand and say that we recognize Indigenous scholars, particularly those who want to work in their communities,” said Dr. Richmond. It also counters the long history Indigenous knowledge and customs being actively suppressed in Canada, she said.

This year’s scholarship program will support 18 graduate scholarships, worth $280,000, with one scholarship committee that features representatives from each region. There will also be institutionally-specific scholarships available at different locations throughout the network, though they’ll all be evaluated in the same way as the others, based on the program criteria. Any Indigenous student studying in a discipline related to Indigenous health is eligible to apply, so long as the key component of their proposal involves a community-centred initiative.

As a product of similar training programs that preceded IMNP, Dr. Richmond said she knows first-hand how a program like the IMNP can benefit students. While she pursued her PhD, her research received funding from the Indigenous Health Research Development Program for two years, an Ontario-based program funded by the Aboriginal Capacity and Development Research Environment, the first ever national Indigenous health training grant. The key difference between IMNP and its predecessors is that it’s specifically intended for Indigenous people, she noted.

“This is a perfect example of the pathway we’re trying to create for our students,” she said. “We know that they’ll all be competitive, but if we can provide a scholarship in their first year, that elevates their CV a little.”

Recalling the launch event at Western on January 11, Dr. Richmond said the effects of such programs are already visible. “In the room yesterday, we had a number of [Indigenous] trainees and our allied [non-Indigenous] scholars were by far in the minority. So, within the span about 20 years with initiatives like ACADRE, we’ve already made this remarkable transformation. Imagine what we can do in the future.”