SciArt was conceived as a way to make STEM more accessible to the art crowd, but a partnership with Science North has broadened the show’s audience by thousands.

Members of the Laurentian University community are using art to help bring science to those who might find the field inaccessible. The LUSciArt Show at Laurentian started off as a display of science-themed paintings, sculptures, photography, mixed media, poetry and music during the university’s annual research week, but has grown beyond a university event.

“Everybody should understand the fundamental value of science and research,” says biochemistry professor Thomas Merritt, who founded the show nine years ago. “If you’re an art kid and you’ve got some sort of internal barrier to listening to a scientist, maybe the barrier doesn’t exist if you’re going to be looking [from] an artistic perspective.” 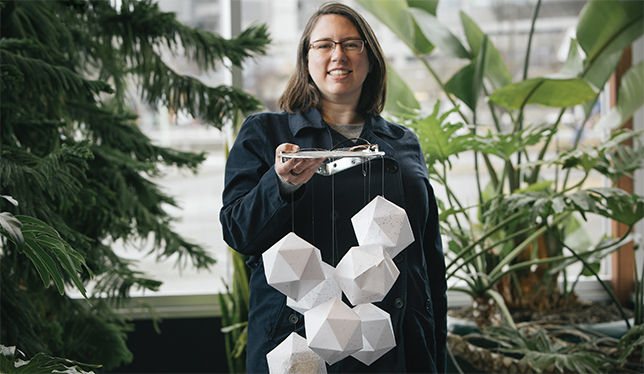 For the 2019 LUSciArt Show, Erica Caden created a mobile of data printouts shaped like the geodesic sphere found at SNOLAB, where she works as a research scientist. Photo by Stacey Lalande.

To get the exhibition up and running, Dr. Merritt formed a faculty committee and put out a call to students, faculty and staff for contributions. He has seen a wide array of types of art, including a creative interpretive dance about the circulatory system, a moving poem from a transgender Indigenous student, a painting about designer babies and gene editing, and a textile blending the solar system and biosphere, which won best in show last year.

The exhibition has grown from its first few years, with approximately 40 pieces, to closer to 100 works of art. It has partnered with the university’s science communication program – a graduate student from the program helps coordinate the show – and the outreach organization Art and Science. It also receives submissions from artists outside of the university.

But it’s the partnership with Science North, an interactive science museum in Sudbury, that has really helped bring the LUSciArt show to a broader audience. The LUSciArt show now opens at Laurentian, then moves to Science North for a two-week stint. “When we would do it on campus … we would have a few hundred, maybe [up to] one thousand people would come to see the show over the course of the day,” Dr. Merritt says. “Then … we move it [to Science North], and thousands and thousands of people come and see it.”

All of this has helped with the show’s fundamental goal: science outreach. “When you have something that really speaks to people, the more people you can speak to … the broader the impact is going to be,” Dr. Merritt says.