Six beehives have been installed atop a building on the university’s campus in downtown Edmonton.

MacEwan University has itself a sweet situation: six honeybee hives have found a home on a third-floor roof at the university’s campus in downtown Edmonton.

Four of the hives were installed above MacEwan’s Building 5 as part of a trial project in May 2016. Soon after, the university began bottling honey from the hives for sale on campus. That first year, the honey sold out in 23 minutes. The trial was so successful that it was recently expanded with two additional hives. “[We] sold 80 pounds of honey this year,” said Troy Donovan, MacEwan’s resident beekeeper.

Mr. Donovan is also the learning systems application administrator in MacEwan’s eLearning Office. When backyard beekeeping became legal in Edmonton in 2015, he approached Kris Bruckmann, director of campus services, about keeping bees on campus, both for his own use and for the university. Mr. Bruckmann was enthusiastic about the idea. Once the project was approved by facilities, security, and health and safety, Mr. Donovan took beekeeping courses with the Edmonton District Beekeeping Association, participated in a mentorship and eventually became a certified beekeeper. At the time of the pilot launch, Mr. Donovan told MacEwan’s sustainability office that the urban beekeeping project was a chance to bring the farm to the city and encourage locals to “eat more dirt.” 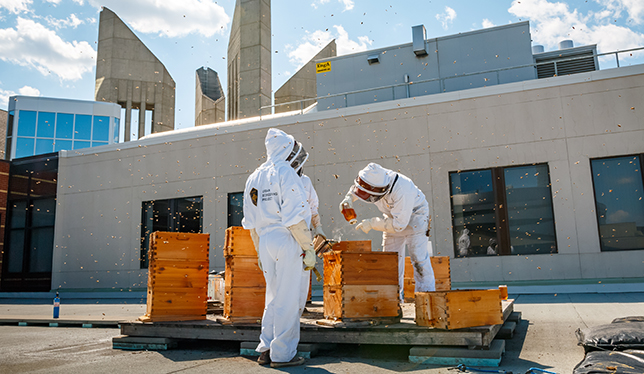 Troy Donovan (right) and his team tend to beehives above Building 5. MacEwan’s iconic clock tower entrance can be seen in the background. Photo by Steven Stefaniuk.

Since the bees were installed at MacEwan’s City Centre campus, they have generated some public interest – they even had a visit from the provincial minister of agriculture – and have provided a learning opportunity for students and community members. The university regularly offers urban beekeeping tours that are open to the public. “We’ve had groups of all ages come through to learn about bees and food security,” said Kerstyn Lane, outreach and engagement coordinator for the office of sustainability. “[I]t’s a very tangible way to talk about food security and food.”

Over the two years of the project, Mr. Donovan has engaged an assistant beekeeper and 12 student volunteers. He’s also worked with MacEwan’s chemistry department to take honey samples for an analysis of its phenol content, which determines how healthy the honey is. Local gardeners and apiarists are now coming to the campus to consult with Mr. Donovan and to see other urban food production projects on campus, which include a tower garden and aquaponics.

“Some people are interested in the bees and others are interested in the honey technology,” Mr. Donovan said. The beehives used at MacEwan are Flow hives, which use a special key and tube system to extract honey. Initially designed in Australia, the technology results in much less disturbance of the bees and fewer bee deaths. No matter the reason that may bring a person in to visit the beekeeping project, the result is the same, according to Mr. Donovan: “It’s helping people learn.”