Majority of the new round of CERC holders are women

The eight new Canada Excellence Research Chair holders come from a number of different countries to set up shop in Canada.

The federal minister for science and sport, Kirsty Duncan, announced a new round of Canada Excellence Research Chair holders on April 17, and five of the eight new chairs were awarded to women. This is a marked change from previous rounds, when most of the chairs went to men.

“This talented and diverse group of research leaders is an excellent example of how, when we bring together new points of view, we make science and research stronger,” Dr. Duncan said in an announcement. 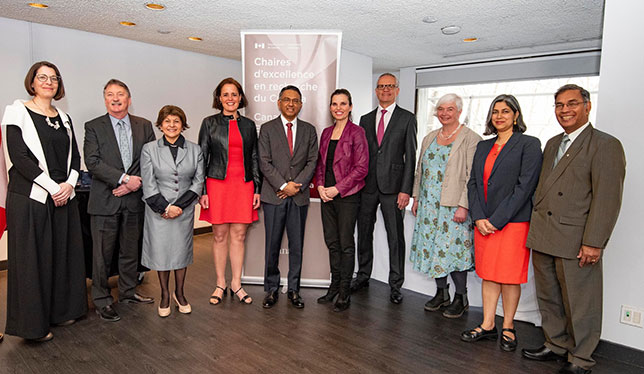 The CERC program, launched by the Harper government in 2008, aims to attract world-renowned researchers and their teams to Canada by awarding up to $10 million over seven years to establish ambitious research programs at Canadian universities.

When the inaugural round of chairholders was announced in 2010, all 19 were men. By 2016, the number of chairholders had grown to 27, with only one held by a woman. As a result, Minister Duncan announced in October 2016 that the next competition would require institutions “to include detailed equity plans and  recruitment strategies that promote the participation of women and other underrepresented groups in the CERC program.”

The CERC program has also drawn some criticism from the research community for concentrating its resources on a few research stars, rather than using those funds to support a wider range of researchers, especially early career scientists.

Holly Witteman, an associate professor in the department of family and emergency medicine at Université Laval, commented on Twitter that she is “happy [that] deserving chairs are coming.” However, “I think it’s a poor use of funds given the gaps in investigator-initiated funds” at the three main federal research granting councils, she said. “Fix the cracks in the foundation before buying chandeliers.”

The eight new CERC chairholders come from various countries and specialize in areas such as human-centred robotics, precision design of cancer drugs, and Arctic ice and climate change. Here is a complete list of the new chairholders:

Dorthe Dahl-Jensen has been awarded the CERC in Arctic Sea Ice, Freshwater-Marine Coupling and Climate Change at the University of Manitoba, joining the team at the Centre for Earth Observation Science in the Clayton H. Riddell Faculty of Environment, Earth, and Resources. She is currently a professor at the Centre for Ice and Climate at the Niels Bohr Institute at the University of Copenhagen.

Ursula Eicker has been named to the new CERC in Smart, Sustainable and Resilient Communities and Cities at Concordia University, where she will join the Gina Cody School of Engineering and Computer Science. A physicist, Dr. Eicker is formerly the scientific director of the Research Centre for Sustainable Energy Technologies at the Stuttgart University of Applied Sciences.

Lara Mahal is the holder of the CERC in Glycomics at the University of Alberta, where she will join experts at the GlycoNet Network of Centres of Excellence. She is currently a professor of chemistry and biochemistry at New York University.

Katja Mombaur joins the University of Waterloo as holder of the CERC in Human-Centred Robotics and Machine Intelligence. She comes to Waterloo from Heidelberg University, where she was a professor at the Institute of Computer Engineering.

Vincent Mooser will hold the CERC in Genomic Medicine at McGill University. He joins McGill from Switzerland, where he was the vice-dean of clinical research at the Lausanne Medical School.

Orlando Rojas has accepted the CERC in Forest Bioproducts at the University of British Columbia. He comes to UBC from Aalto University in Finland, where he was a professor in the department of bioproducts and biosystems.

Sriram Subramaniam also is coming to UBC, as holder of the CERC in Precision Cancer Drug Design. He was previously a researcher at the Center for Cancer Research of the U.S. National Cancer Institute in Bethesda, Maryland.

Anna Triandafyllidou will occupy the CERC in Migration and Integration at Ryerson University. Dr. Triandafyllidou is currently based in Italy at the European University Institute as holder of the Robert Schuman Chair of the Global Governance Programme.