The university is the latest in Canada to rethink its stance on a name many find offensive.

In April of this year, McGill University announced it would no longer use the Redmen name for its male sports teams. It’s the latest postsecondary institution to change a team name seen by many as rooted in harmful stereotypes about Indigenous people.

Public reaction to the decision has been largely positive so far, says Fabrice Labeau, McGill’s deputy provost of student life and learning, thanks in part to an official statement by principal Suzanne Fortier. In the statement, Dr. Fortier explains she had heard from and sought the advice of various stakeholders with McGill about the name, including students, faculty, staff and alumni, while also considering the recommendations of a working group report.

“The university’s principles and values – academic freedom, integrity, responsibility, equity and inclusiveness – are steadfast. They define who we are as a community,” Dr. Fortier explained in the letter. “They must therefore ground my decision about whether to change the Redmen name.” Those principles and values meant changing a name that isn’t one the university would use today given its negative and hurtful connotations for Indigenous people, Dr. Fortier added. 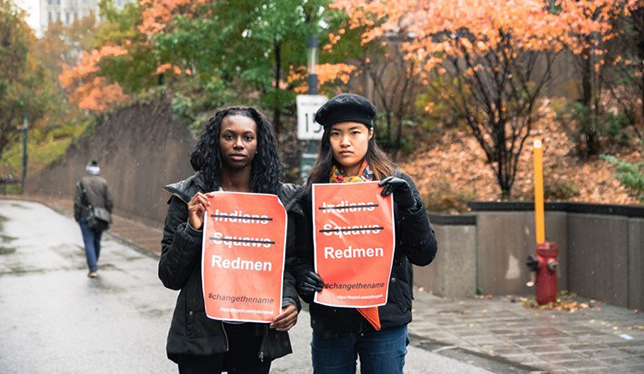 McGill’s decision came after a period of student-led protest and activism advocating for a name change. Tomas Jirousek, a varsity athlete from the Kainai First Nation in the Blackfoot Confederacy, was at the forefront of the #ChangeTheName campaign coordinated by the Students’ Society of McGill University (SSMU).

He says the efforts to change the Redmen name were widely supported by both Indigenous and non-Indigenous students, faculty and staff. He adds that 80 percent of students represented by SSMU supported a name change. “It was actually the entire community, non-Indigenous and Indigenous,” he says. “We stood together and called for this new change.”

The harm of status quo

McGill began using the Redmen name and mascot for its male sports teams in the 1920s. Some who opposed a change argued that the name referred not to a racial slur for Indigenous people but to the colours used in the school’s athletic uniforms. But Mr. Jirousek says that his research into the origins of the name counters that argument. He found that names like “McGill Squaws” and “McGill Indians” had been used before Redmen was adopted.

“It really defeated this argument that the Redmen had nothing to do with Indigenous peoples when you look at the history of the name, you look at the way that it’s been tied throughout songs, through chants, through jerseys,” Mr. Jirousek says.

A number of institutions in Canada and the United States have moved away from names and mascots that Indigenous and non-Indigenous students alike say are harmful, racist and offensive. In fact, a new study by researchers at Yale University found that holding on to prejudicial or offensive mascots can affect students’ feeling of belonging at a school as well as negatively impact donations. The findings run counter to one of the reasons oft-cited for keeping these mascots: the fear that a change will hurt fundraising among alumni with strong associations to their school’s mascot or team name.

The researchers, who focused on Indigenous American mascots, wrote in their conclusion that given the rise in racially motivated hate crimes in the U.S. – a rise that has occurred in Canada as well – now may be a particularly good time to look at removing such mascots from schools.

Memorial University made the decision nearly 30 years ago to drop the Beothuks name from its teams. The reasoning at the time, however, wasn’t strictly virtuous, says Ralph Wheeler, a retired faculty member and a former student athlete at Memorial.

At the time, the university didn’t have a long history with, or strong affinity to, the Beothuks moniker and wanted to bring its teams under a new, revitalized name and logo. Dr. Wheeler’s suggestion, the Sea-Hawks, has been with the university ever since.

But even if the university hadn’t changed back then, it would have now, Dr. Wheeler believes. It’s a shift he thinks will continue, especially as changes come at the highest levels of sport. “If the professional teams decide that they’re inclined to change, you will then see everybody from the universities and the lower leagues changing their names as well,” Dr. Wheeler says.

The Sea-Hawks name also reflected another motivation that’s driving team name changes: choosing names and mascots that are the same for all teams, regardless of gender. Although Memorial uses the Sea-Hawks name and logo for all of its sports teams, local media sometimes refers to the women’s teams as the “Lady Hawks.”

“When they use the Lady Hawks, to me, that’s a disservice to the women Sea-Hawks,” Dr. Wheeler says.

McGill will begin the process of picking a new name and mascot in the fall, Dr. Labeau says, and it plans to engage the school community in making the decision. Mr. Jirousek hopes McGill follows the lead of Memorial and other schools that have moved toward gender-neutral team names. (McGill’s women’s teams are called the Martlets.)

“We’re one of only two universities in the country that have separate names for their men’s and women’s teams,” Mr. Jirousek says. “It’s another opportunity to confront this other issue that faces McGill athletics, so I hope the university moves forward on that.”