Meet Reina Iizuka, the first woman on the roster of a USports men’s football team

“For every individual person who disagrees with what I do, I have three people who support me,” says the philosophy student and linebacker at the University of Manitoba.

According to the University of Manitoba Bisons’ head football coach Brian Dobie, there are several factors that make a great football player and teammate: size, strength and speed, for sure; but also vitally important are technical proficiency, a dedicated work ethic and willingness to learn. Reina Iizuka, a linebacker and the first woman to play on a U Sports men’s football team, impressed the coach on a number of these factors. 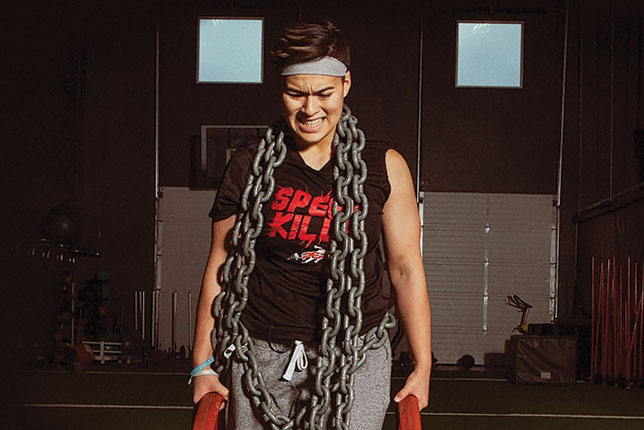 Mr. Dobie and Ms. Iizuka, now 20, met at a football training camp north of Toronto when she was still in high school. “I remember saying, ‘Wow, that guy’s a great tackler,’” Mr. Dobie recalls. A nearby coach replied, “Well, that guy is a girl.”

The Bisons’ coach struck up a conversation with Ms. Iizuka during the camp, where her enthusiasm for the game as well as her high level of technical skill made her stand out. “What struck me wasn’t the fact that she was a girl; I’ve seen girls playing on high school teams before,” he says. “It was her passion. She was a young woman on a path, with a very direct plan.”

“From the beginning, coach Dobie and I shared a mutual respect for each other. I feel we have an honest relationship. He cares about my best interests,” says Ms. Iizuka. “I’m very grateful to be in his program.”

The philosophy student is entering her third year as a member of the Bisons’ scouting or “practice” team, where she takes part in plenty of drills and strategic planning but has yet to see real game play. With only 50 players allowed to dress per game, it’s a highlight that may never come for a player who, at five foot seven and 160 pounds, is smaller and slower than most on the team of 90.

The Bisons have never really advertised the fact that there’s a woman on the roster, and for her part, Ms. Iizuka isn’t spending much mental energy on the opinions of others. “For every individual person who disagrees with what I do, I have three people who support me. My friends and family respect what I do and how I live.” She adds that generally her teammates are respectful and encouraging. “There are bigger things to worry about,” she says.

At the university level, flag and touch football are variations on the sport usually offered for female athletes, but Mr. Dobie says the level of play in those teams isn’t challenging enough for Ms. Iizuka. Meanwhile, she believes that there is value in mixed-gender teams, especially in youth sports. “It’s important for both genders to have an understanding and respect for each other, which sport can provide,” she says.

Mr. Dobie sees a clear possibility of coaching in the linebacker’s future. “Why couldn’t she someday have my job?” he says. “There are male coaches that don’t have the expertise that she has on the playing field.” And there are already (rare) examples of this – notably Jen Welter, a former football player who was most recently a defensive specialist for the Atlanta Legends of the Alliance of American Football, and who coached inside linebackers for the NFL’s Arizona Cardinals during their 2015 training camp and pre-season.

While Mr. Dobie is invested in nurturing the talent of his only female player, there are no free rides; Ms. Iizuka is earning her spot every day. “I never question her effort, her focus, her preparedness, her intensity. You don’t even get that from your top players, all the time,” he says. “She may not be as tall or fast as some of the men, but her brain and her heart are among the best on our team.”