Memorial University has opened a new campus on Newfoundland’s historic Signal Hill. According to Jennifer Adams, interim director of strategic operations at the campus, Memorial’s vision for the new campus is rooted in the area’s historic ties to early exploration and communication technologies – it’s been the home of a 16th-century signal cannon, 18th-century fortifications, the commemorative Cabot Tower built at the end of the 19th century, and in 1901, Guglielmo Marconi received the first trans-Atlantic radio transmission here.

“It’s been a hub, a navigator, a beacon location and a centre for innovation for centuries,” Ms. Adams says. It’s in that spirit, she adds, that the university developed the site into a conference centre, 85 single-occupancy dorm rooms for graduate students pursuing publicly engaged work, and an office space for community organizations. (Among the tenants are Memorial’s Gardiner Centre for professional development and continuing education, a startup incubator called Genesis, and the non-profit Business and Arts NL.) It’s also wired the building with the latest state-of-the-art communication technology – “smart rooms” with assistive technologies and equipment for web-enabled live broadcasts. The latter was included in part to connect Memorial campuses across Newfoundland and Labrador, and to create a “pan-provincial innovation hub,” Ms. Adams says. 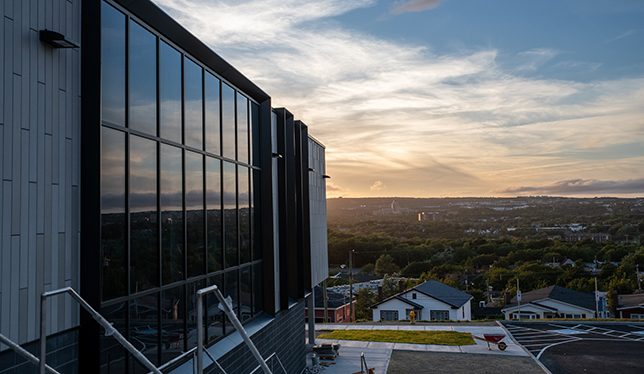 As for its more recent history, the campus is located at the former Battery Hotel, a popular spot for locals who’d come out for a scenic dip in the pool or to celebrate a special occasion in the dining room. Memorial purchased the hotel in 2013 as a solution to a space crunch. Renovations started three years later and this October, the campus was officially open.

Since the hotel had been cobbled together over four decades, Ms. Adams says little could be restored from the Battery, but the iconic bank of windows onto St. John’s Harbour has been recreated. “It’s probably the best view in the whole region,” she says.