Microcredential programs on the rise in Canada

Low rates of awareness about microcredentials by prospective students and employers remains a challenge.

A new report on current views about microcredentials in Canada reveals a majority of higher education institutions are keen to create these concise, competency-focused upskilling programs, and many say the COVID-19 pandemic has made them even more relevant.

Released by the Higher Education Quality Council of Ontario (HEQCO) earlier this month, “Making Sense of Microcredentials” reveals what this emerging training trend means from the perspectives of three key stakeholder groups: universities and colleges, prospective students and employers. The 32-page descriptive research report is based on the results of a literature review, 44 interviews (17 with postsecondary schools), and 2,362 surveys, which included 161 representatives from 105 postsecondary institutions, including 41 universities.

When it came to target markets, most institutions are gearing their microcredential programming to working adults looking to change their occupation (92 per cent) and to current/potential employees of their industry partners (91 per cent). Respondents said microcredentials could help address gaps in transferrable (86 per cent) and technical (81 per cent) skills. Most (90 per cent) were open to partnering with industry or community organizations to create microcredentials.

“We know that large institutions like universities and colleges are not always able to respond as quickly to trends as, say, industry groups, might be, so it’s exciting to see so much microcredential activity within the sector around a concept that is relatively new,” says report co-author Jackie Pichette, director of policy, research and partnerships at HEQCO. “At a time when the pandemic has made the labour market even more unpredictable, microcredentials can help people adapt to changes in their jobs and sectors.”

The report includes a ranking of the top features of a microcredential program by all participants. For postsecondary representatives, those that made the top five are industry aligned, short, based on common understanding/definitions, competency based and stackable. These findings differ in some ways that may be important for postsecondary schools to consider as they develop and market their microcredentials (see charts). 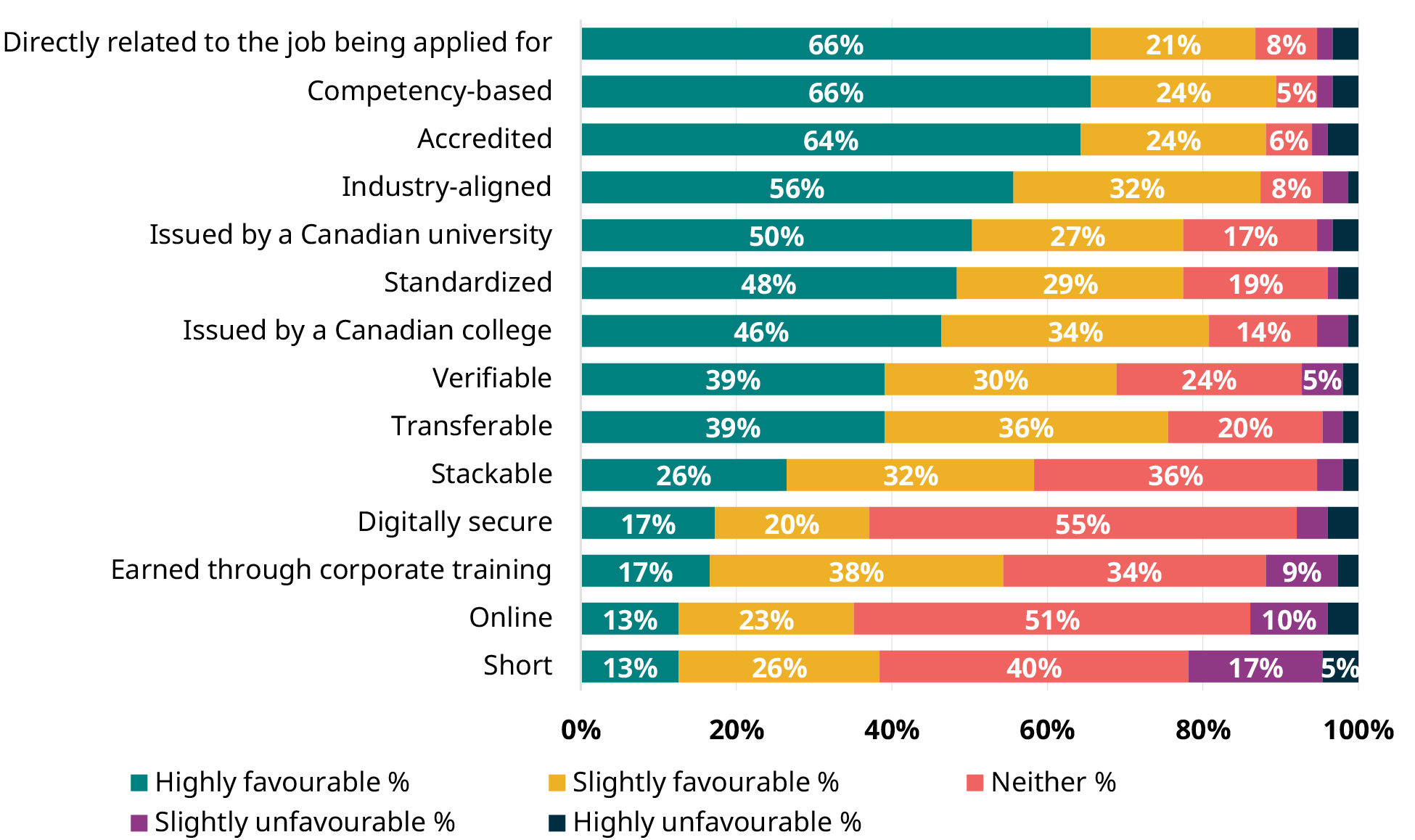 Employer Survey: Imagine you came across a microcredential on the application of a job candidate. How favourably would you consider the following features of that microcredential? (n= 151). Image courtesy of HEQCO. 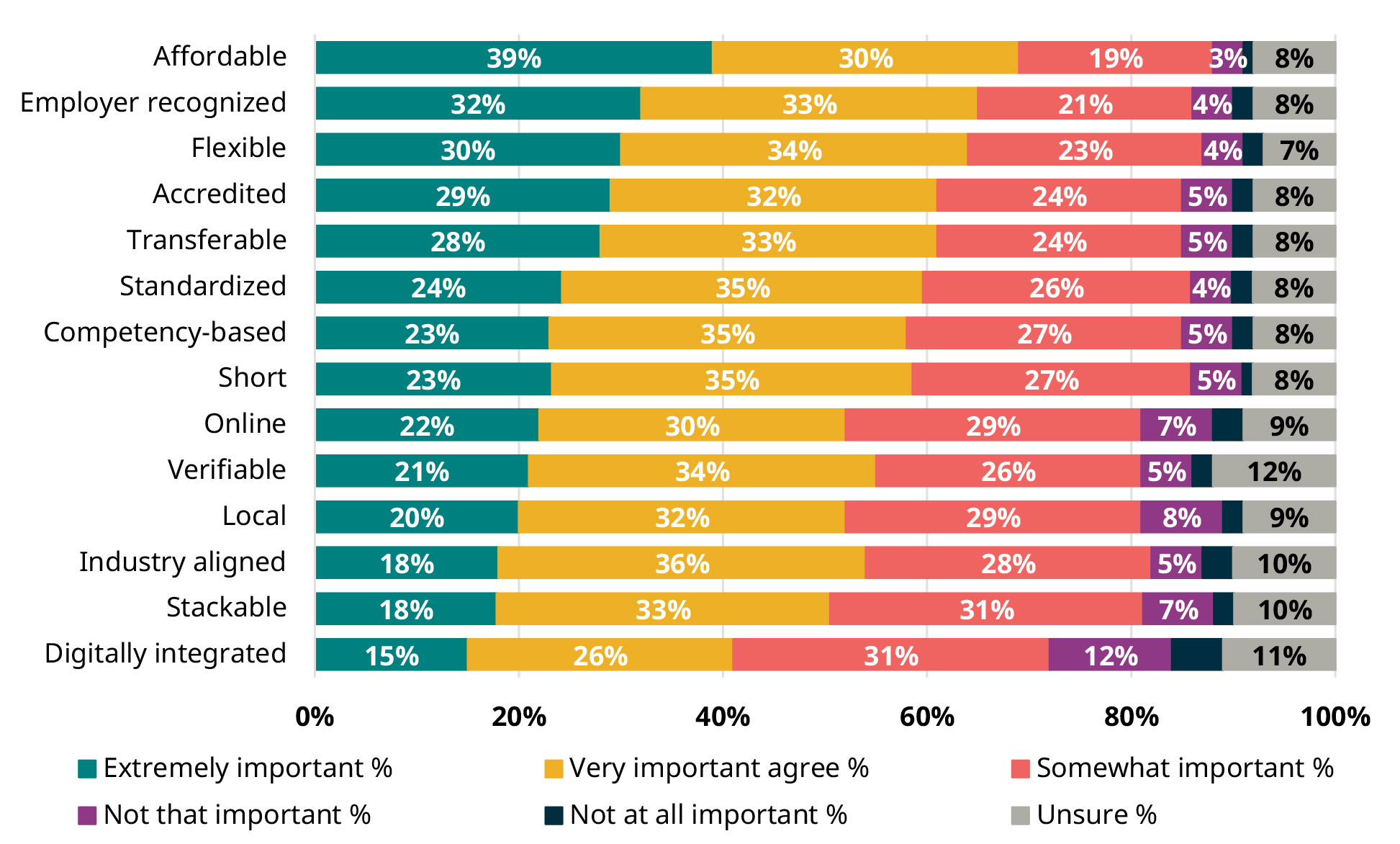 Survey of Canadians: How important are each of the following potential characteristics of a microcredential? Image courtesy of HEQCO.

“We’ve gathered this evidence so that schools can approach microcredentials strategically,” Ms. Pichette says. “We want to help drive the excitement about this trend in a positive direction to serve the lifelong learning needs of community members.”

Microcredentials began gaining momentum in Ontario with the launch by eCampusOntario of 36 government-funded pilot projects at postsecondary schools over 2019 and 2020. The provincially funded non-profit organization established a Micro-credential Principles and Framework document, adopted by eight universities, and hosted two annual micro-certification forums for education, industry and non-profit practitioners.

And yet, as HEQCO’s report makes clear, there are considerably low rates of awareness about microcredentials among their main direct or indirect users: prospective students and employers. Of the 2,000 working-age Canadians surveyed, 75 per cent were not familiar with the term; among the respondents representing 201 Canadian employers of various sizes and industries, that figure was 59 per cent.

“It’s important for institutions to be able to translate their work in this area to the adults who may stand to benefit from the opportunities, including adults who might already be accessing workforce development programs and employment services,” Ms. Pichette says.

Another key issue Ms. Pichette and her colleagues noticed in their research was inconsistent language used by those in the higher education sector to describe what sounded like the same thing: micro-certification, upskilling, reskilling, short training, rapid training, part-time, digital badges. They identified a strong need to define the term in a way that is simple and inclusive, and that allows room for adaptations as the microcredential trend continues taking shape.

Based on their research, and with input from all three stakeholder groups, the authors of the report offered this definition: a microcredential is a representation of learning, awarded for completion of a short program that is focused on a discrete set of competencies (i.e., skills, knowledge, attributes) and is sometimes related to other credentials.

Until this program, most funding for provincial postsecondary education has been open only to first-time students. “Historically, there has been a gap in funding for initiatives for those who have previously attended college or university,” says Ms. Pichette. “There haven’t been a lot of options for people with postsecondary foundations who need to upskill with short, focused training.”