The 15 teams chosen for the Canadian Space Agency’s CubeSat program have until this fall to get their designs ready for a 2021 launch.

Can a Rubik’s Cube-sized satellite help fight wildfires, monitor sea ice or help us to understand dark matter? The answer is yes – and much more. These are just some of the missions being worked on as part of the Canadian Space Agency’s CubeSat Project.

Thanks to the miniaturization of computing and communications technologies, these compact satellites can be launched at a significantly lower cost than larger satellites, making space exploration more accessible than ever. The tiny satellites – typically measuring 10 cm x 10 cm x 10 cm and weighing about one kilogram – are an ideal platform for testing new technologies, for taking measurements from space, as well as for commercial applications like providing telecommunications services or Earth imaging. The satellites can be used singly or grouped together to accomplish more complex tasks.

The CSA launched the Canadian CubeSat Project in 2017, inspired in part by other successful CubeSat initiatives like the European Commission’s QB50 program. (The University of Alberta was the only Canadian participant in the European QB50 program with its Ex-Alta 1 CubeSat.) Fifteen teams from postsecondary institutions in every province and territory were chosen for the Canadian project, with each team receiving from $200,000 to $250,000. 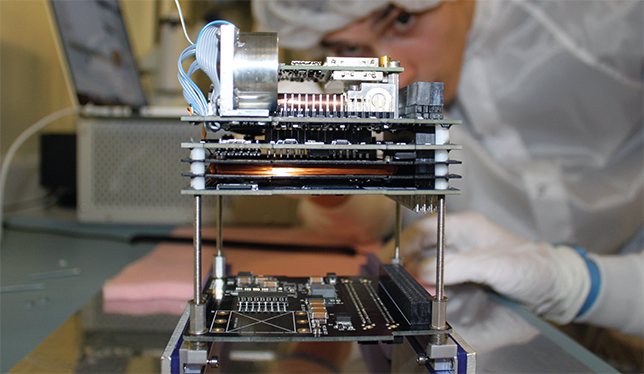 “Our primary objective here is to provide experiential learning and training opportunities for students,” says Jayshri Sabarinathan, an assistant professor of electrical and computer engineering at Western University and the principal investigator for Ukpik-1, Western’s joint CubeSat project with Nunavut Arctic College in Iqaluit.

The hands-on training spans every step of developing a space mission, from initial design to building, testing, launching and operating the CubeSat in orbit, says Ian Mann, a professor of physics at U of A and faculty advisor for his university’s entry, the Ex-Alta 2 CubeSat project. The CSA hopes to inspire interest in STEM fields and give students the opportunity to round out their technical knowledge with business, project management and communications skills, says Dean Sangiorgi, senior engineer with the CSA and project manager for the CubeSat project. The latter is achieved in part through an outreach plan each team is required to include.

“It’s the exact kind of stuff that you don’t quite get to do in your classes. You learn theory about how to do this, but maybe don’t get to actually carry it out,” says Callie Lissinna, an undergraduate mechanical engineering student at U of A and the Ex-Alta 2 project manager.

Ex-Alta 2 will expand on the work of Ex-Alta 1, measuring the dynamics of space weather to assess its influence on satellites and ground-based infrastructure. But the CubeSat’s primary payload is Iris, a multi-spectral camera that will be used to predict wildfire risk and track post-burn recovery rates. “We can make this data about wildfires much more accessible and affordable by proving it can be done much more cheaply on a very small platform,” says Ms. Lissinna of their mission.

Ms. Lissinna says deciding to incorporate Iris was a way for the team to give back to friends and family who supported the team in launching Ex-Alta 1, some of whom were directly affected by the 2016 Alberta wildfires.

The Alberta team is also expanding an open-source model originally developed for Ex-Alta 1, which shares designs in a non-proprietary way. “If you develop a piece of hardware and then you test it in space and it works, that experience is incredibly valuable for follow-on developments,” said Dr. Mann.

Outreach is also a main priority for the team from Western and Nunavut Arctic College, who are looking to engage secondary schools and communities in Ontario and Northern Canada. Already, a public competition in 2019 led to the satellite’s name, Ukpik-1 (ukpik is the Inuktitut word for snowy owl).

This is the first CubeSat project for both institutions and is a signature initiative of Western’s new Institute for Earth and Space Exploration, launched in October 2019. Ukpik-1 will carry two 180-degree virtual-reality cameras, an in-kind donation from industry partner Canadensys. The hope is to take captured images into classrooms, giving students and other community members a 360-degree experience of outer space, says Dr. Sabarinathan.

How are CubeSats launched?

CubeSats tend to hitch a ride into space using extra space available on rockets. They are packed in a container which, with the push of a button, activates a spring that ejects the CubeSats into space. CubeSats can also be deployed from the International Space Station by using the same technique from the airlock.

Though the CubeSat itself will be built at Western, the plan is for students from Nunavut Arctic College to learn from Western’s technical knowledge and build their own future satellite. Indeed, according to both teams, it’s these connections created between the student teams, the CSA and industry experts across the country that has proven to be one of the most valuable aspects of the program.

“It’s all student led,” says Elliot Saive, an engineering physics undergraduate student at U of A and the payload team lead for Ex-Alta 2. “We get to interface with other satellite teams and with other like-minded students who are also going through the same highs and lows that we are. … These opportunities are far more than I anticipated coming into university.”

Mr. Sangiorgi says CSA members have also learned from the students. “It’s usually the young people that push new ways of doing things.” Currently, the teams are making revisions to their preliminary designs, looking ahead to final design reviews in October 2020 and tentative launch dates in 2021.

Ms. Lissinna says the project has exposed her to what’s happening in the space sector right now and to opportunities available as a result. She and a group of Alberta CubeSat alumni have already founded Wyvern, a startup specializing in satellite imagery for precision agriculture.

“There really is a burgeoning new commercial economy based on the miniaturization of space,” says Dr. Mann. “It’s been actually very rewarding for me to see the development of student capacity in space, and then to use the skills that they’ve learned and go and apply them in the real world.”