With over 100,000 pieces spanning the architect’s career, the archive will be the university’s largest collection.

Moshe Safdie – the Israeli-Canadian architect who designed Montreal’s iconic Habitat 67 structure – has gifted his entire professional archive as well as his apartment within the building to his alma mater, McGill University. The archive will be the institution’s largest collection, containing over 100,000 pieces, including sketchbooks, drawings, models, and correspondence capturing the architect’s more than 50-year career. At the time of the donation announcement in August, Mr. Safdie, 84, shared with Canadian media that the support and opportunities he received as a young student in Quebec solidified his decision to make Montreal the home for his life’s work.

Found within the archive is the master copy of Mr. Safdie’s undergraduate thesis: A Case for City Living, which inspired his design of Habitat 67. The apartment building, which served as a pavilion during the 1967 World Expo, consists of 354 irregularly stacked, identical concrete boxes spanning 12 stories and interwoven between gardens and terraces. Mr. Safdie’s duplex unit, overlooking the St. Lawrence River, is intended for scholarly research, artist-in-residence programs, exhibitions and symposia, according to McGill. That process, however, is in its nascent stages, requiring careful planning. 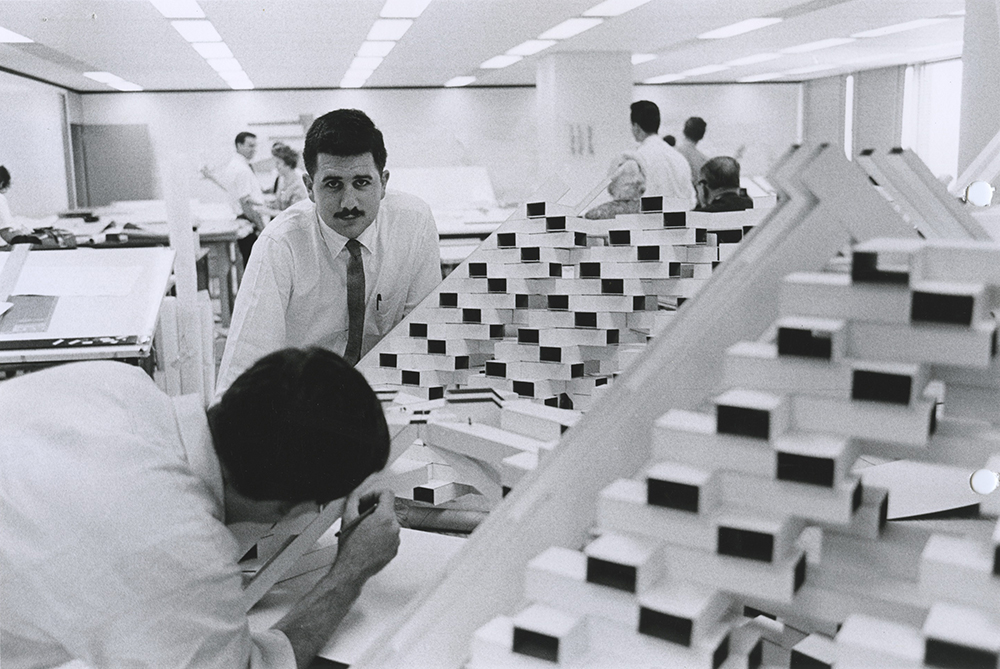 Moshe Safdie (left) pauses to consider his original Habitat 67 working model, which was conceived in the 1960s. Photo courtesy of Safdie Architects.

“He said quite clearly that he had imagined giving it to Harvard or to Israel, but in the end, he realized that being at the school – the training he got here and the people he met along the way – was important enough that this was the right place,” said David Theodore, director of McGill’s Peter Guo-hua Fu School of Architecture. “We’re very excited that he chose McGill.”

McGill will collaborate with the non-profit Fondation Habitat 67 organization on the apartment’s preservation and maintenance, marking the first time a public institution has been part of the private community of residents in the building.

As Habitat 67 is a Quebec heritage building, Dr. Theodore said that the non-profit board members are pleased that the university will be bearing some of the responsibilities of stewardship, however “for everyone else in the building, this is where they live.” The two parties, he said, “have to negotiate, or learn to live together.”

For now, the university’s top concern is ensuring that the “stunning apartment” is received in good faith, and that the institution honours Mr. Safdie’s intention that it continues to be a resource not only for McGill community members but for the public at large.

From a research perspective, said Dr. Theodore, Habitat 67 remains the most famous models of post-war modernist utopias, or buildings that “were trying to imagine how the future would work, and how people would live together.” Its continued relevance to his day, he said, demonstrates the ground-breaking vision of one of McGill’s most celebrated graduates.

“Habitat 67 captures our imagine about the way we might live,” he said. “Even though it was built 50 years ago, it seems to carry this utopian idea that later, we’ll figure out how to live together and we’ll have garden.” Somehow, he said, it seems to still hold that promise.