Researchers won’t have to leave the country to perform experiments that allow them to see inside materials.

Alannah Hallas develops new quantum materials as an assistant professor of physics at the University of British Columbia. When she and her graduate students land upon a promising substance, they test it with ultrasound, X-rays and lasers. But nothing provides as much useful data as neutron scattering.

“Neutron scattering is one of the most important tools in our toolkit,” says Dr. Hallas. “Neutrons allow us to see the inside of materials, see how the atoms are arranged, how they respond to heat and their magnetic properties.”

There are a number of different testing approaches that use neutron beams on matter that allow researchers to detect what’s going on at the most basic level. Since 2018, however, researchers like Dr. Hallas have had no place in Canada to perform these experiments.

Before the pandemic, researchers could travel to the U.S. or Australia, provided they could secure time on neutron-scattering beamlines that were overly subscribed. The worldwide shortage of neutron scattering tools meant Dr. Hallas and others had to shelve projects.

This situation is finally set to improve. A $14.25 million grant from the Canadian Foundation for Innovation (CFI) will help fund new beamlines adjacent to the reactor at McMaster University. Some of that money will also be given to the Oak Ridge National Laboratory in Tennessee and the NIST Centre for Neutron Research in Maryland to create partnerships and provide Canadian researchers with access to those facilities that have powerful beams.

Another grant will help a different scattering tool get past the design stage. Meanwhile, a group is working to set up a national neutron scattering-focused organization. 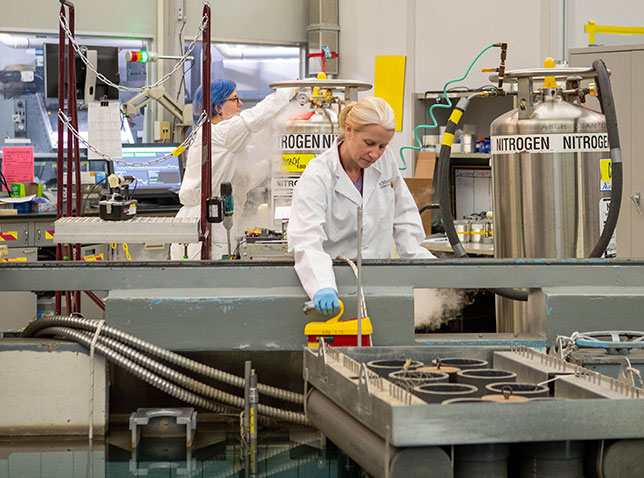 The Canada Foundation for Innovation is investing more than $35 million in McMaster research projects, including $14.25 million to add three neutron beamlines to the McMaster Nuclear Reactor. Photo by Georgia Kirkos/McMaster University.

Canadian researchers used to do scattering tests — and learned how to use beamlines — at the National Research Universal Reactor at Chalk River before it closed in 2018. An agreement with Oak Ridge that gave Canadians priority access to its Spallation Neutron Source testing facility ended that year too. “It was kind of a kick in the face, the two expiring at the same time,” says Drew Marquardt, assistant professor of biochemistry at the University of Windsor and president of the Canadian Institute for Neutron Scattering (CINS), a longstanding organization for scientists who use neutron beams.

The construction of a small angle neutron scattering device that can look at materials at the nanoscale level will be completed at McMaster by the summer, according to Dr. Gaulin. He started preparing a location and putting this first tool together after receiving $3 million from CFI in 2013. He says it will be ready to use by researchers by the end of 2021. Dr. Gaulin plans to construct five neutron scattering devices, including a powder diffractometer and an engineering diffractometer. Some will be made using old equipment from the five beamlines once in operation at Chalk River.

Meanwhile, Dr. Marquardt, who uses neutrons to study the structure of cell membranes, hopes to build a testing tool that needs no reactor for its neutrons. He obtained $250,000 in 2019 from the New Frontiers in Research Fund for the design of a compact accelerator neutron source device, a small device with multiple uses, including capturing neutrons for cancer treatment. “Japan has one of these that can fit on the back of a tractor trailer.” He estimates he’ll need $20 million to get this device built.

While having more facilities in Canada and access to sources in the U.S. will be transformative for both researchers and industry, the sector requires leadership too. “We need a voice for the neutron industry,” says John Root, executive director of the Sylvia Fedoruk Canadian Centre for Nuclear Innovation at the University of Saskatchewan. He’s a long-time CINS member and used to be director of the Canadian Neutron Beam Centre at Chalk River.

That’s why CINS has fostered the launch of the Canadian Neutrons Initiative. Run by the vice-presidents of research at the universities of Saskatchewan, Windsor and Alberta, as well as McMaster and Dalhousie University, plus Dr. Marquardt, and supported by organizations and universities, the initiatives’ plan is to launch Neutrons Canada.

Dr. Root says the organization will be able to garner government attention, speak to Canadians — pretty much no one knows what neutron scattering is — and serve as a hub for researchers and industry seeking beamline access. “If you have a national program, there’s a mission of outreach and making people aware and showing how the work matters,” he says. Work is underway to set the group’s governance terms so it can become a legal entity, secure funding and launch.

Much of the work that’s coming to fruition now dates back to before 2015. “It feels like it’s been a long time in coming and it has been a lot of work,” says Dr. Gaulin. “But this is where the real work starts.”