“Reclaiming Shingwauk Hall” is “a history of what happened to me and [to thousands of other] kids,” says one residential school survivor.

As visitors walk through the doors of Algoma University’s Shingwauk Hall building, a new exhibit lining the walls acts as a reminder of where they stand — inside the corridors of the former Shingwauk Indian Residential School.

The permanent exhibit, “Reclaiming Shingwauk Hall,” explores the history of the Shingwauk and Wawanosh residential schools, their transformations during the industrial and residential phases, and their students’ experiences.

The “community-driven, survivor-led” exhibit is important for “survivor healing [and] community reclaiming space,” says Krista McCracken, researcher and curator at the university’s Shingwauk Residential Schools Centre (SRSC), which spearheaded the project with the Children of Shingwauk Alumni Association (CSAA). “It serves as a really important education tool for our local community, [and] also nationally.”

“To me it’s a history of what happened to me and [to thousands of other] kids,” says Mike Cachagee of the Chapleau Cree First Nation and a founding member of the CSAA. He spent more than 12 years at three residential schools including Shingwauk. “It’s important to me and it’s important to family [and] to my community, it’s part of my being,” he says.

Launched on Aug. 3, the exhibit is divided into three galleries.

The first, From Teaching Wigwam to Residential School, focuses on Ojibway Chief Shingwauk (Shingwaukonse) and his vision of “teaching wigwams” — a place of cross-cultural education in European knowledge and the Anishinaabe peoples’ traditions. The gallery explores how that vision was lost through the residential school process and how Algoma is restoring it, says Ms. McCracken.

The second, Life at Shingwauk Home: An Indian Residential School, speaks of the students’ experiences at the school until it closed in 1970. The third, We are all Children of Shingwauk, celebrates the successes and resiliency of survivors, their families and current Anishinaabe students, says Ms. McCracken.

In this last gallery, there are several types of portraits and stories, including those of first- and second-generation residential school students. Their stories were reclaimed and written by living residential school survivors, says Trina Cooper-Bolam, who designed and co-curated the exhibit with Jonathan Dewar and Jeff Thomas. It also features the stories of current Algoma students – students who are the authors of their own destinies, Ms. Cooper-Bolam says. 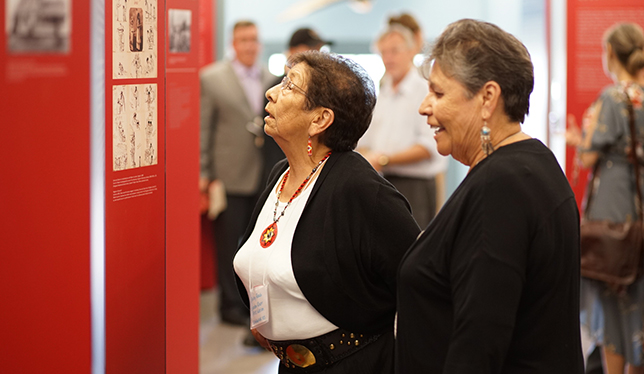 Shirley Roach (left) and Shirley Horn, chancellor of Algoma University, are survivors of the Shingwauk Indian Residential School. They attended the opening of “Reclaiming Shingwauk Hall” on Aug. 3, 2018. Photo by Cody Spahr.

“We’ve seen a wonderful opportunity here to … tell exactly what happened in the residential schools,” Mr. Cachagee says, adding that the exhibit has reassured many fellow survivors, including those who went to different schools, that the history of residential schools will be preserved.

Susie (Kicknosway) Jones, a member of CSAA, says she was initially hesitant about the exhibit. Ms. Jones was forced to leave her Walpole Island home and attend Shingwauk before she was five. Two of her brothers also went to Shingwauk – one of them died within her first year there. After visiting the display at Algoma, Ms. Jones says she is satisfied it will serve its educational purpose and help her share her story – something the 82-year-old started doing only after she retired.

The project has allowed former students like Mr. Cachagee and Ms. Jones to “speak their truth about their school and their experience,” said Don Jackson, who co-founded the Shingwauk Project in the 1970s (now the SRSC). Witnessing the final product was emotional, he says, because it represented decades of research and work with Indigenous peoples to help them gain public recognition and understanding.

“It is an amazing story of resilience, of love, of sharing, healing, learning and giving everything you can from what you’ve experienced to those who will come after … and carry on the struggle,” he says.

The next phase of the exhibit is scheduled to open in 2019.