With a Coast Salish design and modern fit, the new academic robes honour Kim Baird, the first Indigenous woman to serve as chancellor at the institution.

As a freelance fashion designer, Sam Stringer normally works on custom evening and bridal gowns, but when Kwantlen Polytechnic University asked her to create new academic regalia for the incoming chancellor, she was thrilled by the chance to use her skills for her alma mater.

The new chancellor, Kim Baird, is also a graduate of KPU, a former chief of Tsawwassen First Nation, and the owner of a strategic consulting firm specializing in First Nations’ policy, governance, economic development and engagement. She’s also the first Indigenous woman to serve as chancellor at KPU. Ms. Stringer worked closely with her throughout the design process. 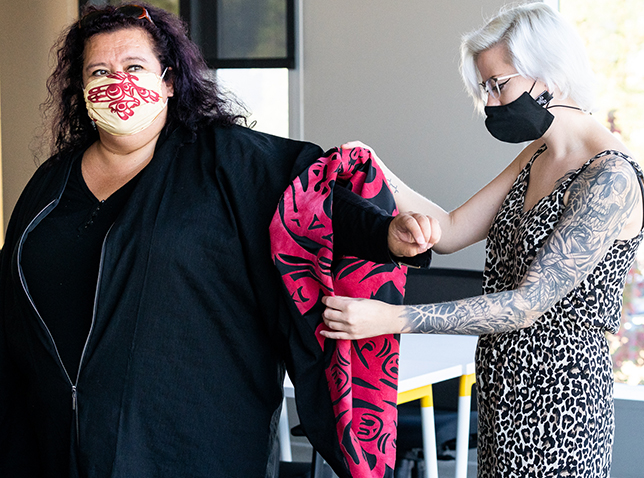 “It was quite a collaborative project from the beginning, because I worked with Kim and some other Tsawwassen First Nation representatives to make sure that we were contributing in a way that would be appropriate, as well as really educational and creative,” says Ms. Stringer.

Ms. Baird connected the designer to a cedar weaver from Tsawwassen First Nation who created a traditional mat for the robe. The woven mat was then laser cut into shapes that were integrated into the sleeves of the garment. Ms. Baird even helped split the bark that was used for the weaving. “Cedar is very protective and has healing properties, so it’s appropriate that it’s a part of my regalia,” the chancellor says.

Ms. Stringer says the design process was also about updating the regalia to be more modern, with shorter sleeves and a lighter, more comfortable fabric. The robe’s hood and lining feature a red and black emblem derived from the KPU coat of arms. It includes images of a wolf, salmon and the Fraser River, all symbolic to Kwantlen First Nation, the Coast Salish community from which the university takes its name. (In its territorial acknowledgment, the university notes that its campuses are located in a region which “overlaps with the unceded traditional and ancestral lands of the Kwantlen, Musqueam, Katzie, Semiahmoo, Tsawwassen, Qayqayt and Kwikwetlem peoples.”)

Ms. Stringer says every design element was intentional, including the laser cutting, which she thought of as a metaphor for carving — a staple Coast Salish art form. “In Coast Salish design, they focus more on negative versus positive space, where you’re subtracting from the object … so I thought I could laser cut something, and focus on that negative release from material,” she says.

When Ms. Baird saw the finished robe, she says it far exceeded her expectations. “I gave [Sam] lots of ideas, but I had no idea what she’d come up with,” she says. “It just shows her skill level to be able to take that information from me, do further research, and turn it into something that reflects the heritage of the university, and my heritage as well.”

In wearing regalia that honours and reflects her heritage, Ms. Baird says she feels her role as chancellor has started off the right way. “Some people might think it’s window dressing, but I think it’s really important, these symbolic gestures,” she says. “It’s an important gesture for reconciliation.”