Details shed light regarding the ongoing situation at the bilingual university in northern Ontario.

Three reports on Laurentian University and its 2020-2021 financial statements were made public in March. The documents paint a dismal picture of the university both before and immediately after it began its restructuring process. The most recent report, prepared by the Ontario ombudsman’s French language services unit, was released on Mar. 31.

The French language services commissioner for Ontario, Kelly Burke, concluded that Laurentian, the Ministry of Francophone Affairs and the Ministry of Colleges and Universities had failed to comply with the French Language Services Act (FLSA).

Her report found that there was a lack of communication between the three organizations about the impact of the restructuring on Laurentian’s French language programs. Initial discussions were informal and not proactive. In the end, 48 per cent of the university’s French programs were cut.

Ms. Burke also found that the wording of Laurentian’s designation under the FLSA was ambiguous. While the complainants believed that the programs were protected, the ministries and the university insisted that only 13 degrees were protected. However, no details were given on what constitutes adequate service levels.

“I believe this interpretation goes against the spirit of the French Language Services Act,” which is meant to promote and protect the culture and language of Franco-Ontarians. “The spirit of the Act carries a lot of meaning in the francophone community. What I observed was an interpretation that considered that a single degree program could fulfill the obligation set out under the Act. I disagree with that interpretation,” Ms. Burke said.

Given the current lack of clarity, the commissioner can only state that the obligations had not been fulfilled for two degrees: the master of physical education and master of arts, which had 100 per cent of their programs abolished. She emphasized, however, that all French-language degrees – even those that did not lose any programs – were negatively affected by the cuts.

As a designated public service agency, the organization would be subject to the French-language service obligations under the FLSA that apply to government agencies, either in respect of some or all of its services, depending on the designation.

The 19 recommendations she drafted are meant to clarify what is protected under the FLSA, define the responsibilities of a designated university and the two ministries, and improve communication to prevent similar events in the future.

The ombudsman’s French language services unit launched its formal investigation in June 2021 after receiving 60 complaints about the cuts at Laurentian.

Read also: Making the best out of a bad situation at Laurentian

In early March 2022, Laurentian filed its 2020-2021 financial statements. According to the KPMG-audited numbers, for the fiscal year that ended on April 30, 2021, the university had a deficit of nearly $69 million. Its financial footing appeared critical.

However, the cost of its restructuring, a process launched three months prior, represented $79.1 million of its total expenses of $261.5 million. Restructuring costs included employee terminations, legal fees and losses due to the termination of interest rate swap agreements on its long-term debt.

Details about Laurentian’s long-term debt to financial institutions are provided in the financial statements. Totalling $89.9 million and with maturity dates running from 2023 to 2043, the loans were “for the financing of various residences, construction of the school of education and student centre as well as campus modernization projects.”

Read also: A look back at the first 365 days of Laurentian University’s restructuring

In addition to financial restructuring, Laurentian also initiated administrative restructuring. The company called Nous Group was selected to produce two reports analyzing the university’s governance and management. They were published on March 2.

The reports were coolly received by the Laurentian University Faculty Association (LUFA). Its members had wanted to be part of the solution, but the Nous Group reports only considered one of their suggestions before ultimately rejecting it, according to LUFA president Fabrice Colin.

That suggestion was to amend the Laurentian University of Sudbury Act to give faculty two voting seats on the board of governors. “It would increase transparency and reduce in camera sessions, which the administration used regularly,” Dr. Colin explained.

In its report titled Governance Review of Laurentian University, Nous Group gave recommendations on the size of the board and senate, communication between those two governing bodies and the definition of skill requirements for recruiting.

The firm also considered the possibility of changing Laurentian to the less common unicameral governing model that is used by some universities around the world.

Despite showing that the unicameral model has many benefits, including “clarity of authority and responsibility” – an issue that they note affects the senate – Nous Group recommended improving the existing bicameral model, in part because it can be implemented quickly. They do, however, suggest that Laurentian revisit the unicameral model at a later date. 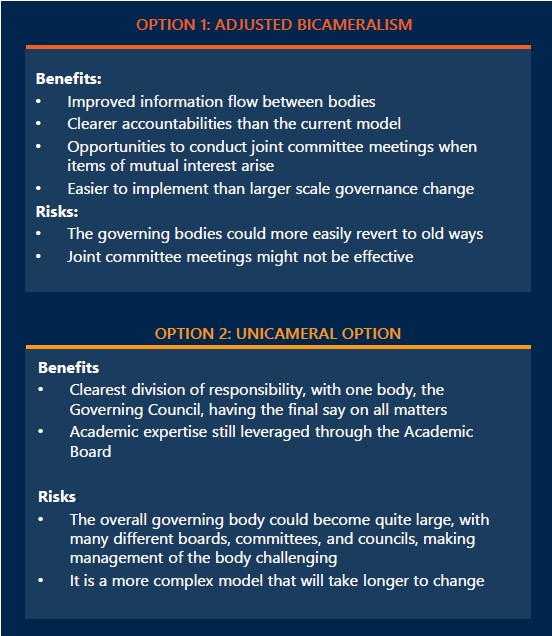 The board of governors and the senate discussed the reports on Mar. 30 and 31, respectively. The senate opted to ignore parts of the recommendations that its members believed could reduce the powers of that body. Even so, they agreed to the creation of a committee to evaluate Nous Group’s suggestions and explore how to implement some of their recommendations, such as reducing the number of members for improved efficiency.

Dr. Colin was also disappointed that there was no recommendation for a mechanism to ensure the board of governors upholds senate decisions. He pointed to the example of an interim vice-president who decided to suspend admissions to over 15 programs in 2020. Despite the senate adopting a motion stating that it was the sole body with the authority to take such a decision and requesting “the reinstatement of admissions to the programs in question,” the administration did not act.

Dr. Colin also opposes the recommendation of appointing senators rather than continuing to use the current internal election process.

The report contains ideas that could improve the university’s governance, according to Dr. Colin, and should not be rejected outright. For example, he supports creating a secretariat responsible for information flow between the senate and the board of governors as well as strengthening the role of senate chair. “In the end, it will all be about efficiency” he said.

The Operational Review of Laurentian University report is even less complimentary of the institution’s administrative operations. Many issues were identified.

Nous Group noted unclear strategic planning, service delivery that was provider-centric rather than user-centric, a lack of rigour in financial management, inefficient processes and a limited adoption of digital tools.

Hiring is one critical process lacking in rigour, the report said. In some cases, managers extended offers without consulting the human resources, denying the HR department access to key data like salaries, which is essential to its work.

Dr. Colin said he witnessed transparency erode over the years in areas such as the recruiting of senior administrators. “Processes became increasingly secretive. For recent hires, it got to the point where the senators only knew about the successful candidate. They didn’t even know who was on the short list.”

Laurentian’s administration said it is satisfied with the three recent reports. Implementing the recommendations “on operations and governance will require significant time and money, like any transformation project,” the institution said in a statement. “The university is fully committed to this evolution and understands that the intent of the recommendations is to bring about positive change. The process will include discussions with the university community and require the support of many stakeholders.”

Another investigation into Laurentian is still in progress. The Office of the Auditor General of Ontario was given the mandate to audit the resource optimization carried out in spring 2021.

In the fall, Laurentian’s management refused to provide the documents requested by Auditor General Bonnie Lysyk. Following a court battle and the involvement of the Government of Ontario and the Ontario Legislature, the university backtracked and handed over a large number of documents in early February.

However, the Office of the Auditor General confirmed to University Affairs that it had not yet received all of the requested documents. It declined to go into more detail since its investigation is ongoing.