Nineteen-year-old Carleton University student Wondu Gebeyehu touches a tiny metal probe to a drop of clear, colourless liquid in a cooker – the small pan used to prepare drugs such as heroin for injection. He extracts 2 microlitres – less than half a tear drop. It’s a miniscule amount, but enough for the portable mass spectrometer to rapidly scan and tell intravenous drug users what they are about to inject into their veins.

“Much of the current opioid crisis is based on people not being fully aware of what they are consuming,” Mr. Gebeyehu says. “We have seen a large amount of heroin being sold that doesn’t contain any heroin at all. What has been sold to users as heroin has in fact been solely fentanyl or a mixture of some sort.” 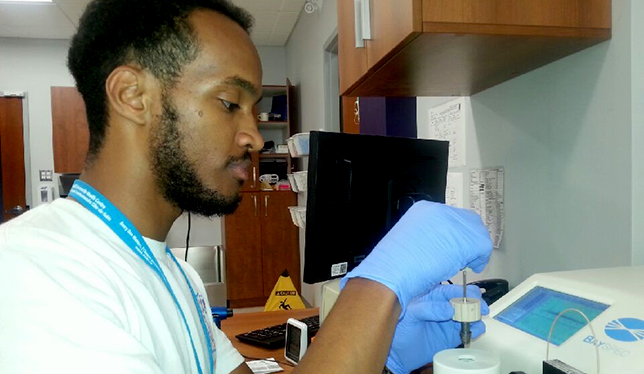 Mr. Gebeyehu is using water for this demonstration but if it was heroin, the spectrometer could scan the sample for 16 toxic compounds including fentanyl, methamphetamine, cocaine and morphine in under 20 seconds. That process previously took months for scientists to assess.

Developed by the California company BaySpec, this cutting-edge device has been set up in a supervised injection site at Ottawa’s Sandy Hill Community Health Centre through a research project between Carleton and the University of Ottawa. When clients come in to use the supervised facilities, they can offer up a trace sample of their drug, then sit shoulder-to-shoulder with the technician as it is scanned.

“Then they have a choice to make with this information,” Mr. Gebeyehu says. “Are they going to continue to inject and use, are they are going to leave the sample with us to have it destroyed by the Ottawa police service, or are they going to maybe change the supplier they get their substances from?”

U of Ottawa assistant professor Lynne Leonard is the project lead. She says the service has already met with excellent response.

“People are very aware that there is a contaminated drug supply,” she says. “This is allowing them to take control of their health because right now, they don’t have control.”

Dr. Leonard says the research gleaned from this project will allow them to evaluate if the service is changing people’s behaviour. “If they know there is fentanyl in what they thought was heroin, or if the heroin turns out to be cocaine, is this information changing their behaviour?”

“I’m excited to be involved in such a relevant program,” Mr. Gebeyehu says. “Clients are very grateful. They promise to tell anyone they know who uses drugs about this service. That’s what we’re trying to do. Provide this service and make as many people as possible aware of it.”