NSCAD University recently launched a new film festival to showcase the school’s award-winning alumni. The inaugural NSCAD University Film Festival was held in Halifax on April 4-5 and ran both in person and online.

“It’s time. Let’s get everybody back into the cinema, get everybody excited about the idea of going to watch movies again, and I think it worked out quite well,” said Sam Fisher, an associate professor at NSCAD.

The biggest impetus behind the festival was to promote the film program, said Mr. Fisher. “We’re ushering these feature film directors. Canada’s new talent, a lot of it is coming through our program and they’re becoming central figures in the Canadian film industry. I don’t think the public is aware of that,” he said. “It would be nice if the public recognizes our position in the industry, as opposed to just in education. We create filmmakers that are part of the industry. In a sense, we are part of the industry.” 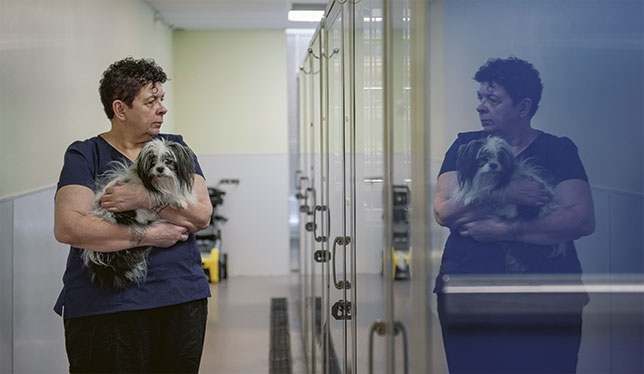 With support from TD Insurance, six short films and two feature films produced by graduates of NSCAD’s media arts division were screened over the two nights, both in person and online. Collectively, the films had garnered 35 awards and were created by alumni spanning from 2004 to 2021.

Sunil Sarwal, president of the NSCAD Alumni Association and the person who initiated the festival, said it is part of a larger goal to promote and celebrate the work of NSCAD graduates, as well as to shift public perceptions around fine arts degrees. “I want to work to counter this idea that somehow an art school degree does not lead to a career, does not lead to financial resource success,” he said. “This film festival was one of the ways that we are able to show that you can get an excellent-quality arts education at NSCAD.”

Anna Kuelken, who completed her BFA at NSCAD in 2021, travelled from Alberta to see her short film Father Like Son screen on the second night of the festival. Having spent the last 18 months of her degree learning remotely, she said she was ready. “I definitely missed it, so I went with my mom,” she said.

As a recent graduate, Ms. Kuelken said the presence of more established filmmakers impacted her perspective on her own place in film. “It’s kind of hard to call yourself an artist,” she said. “You look up to all these people that have made all these amazing things and you don’t feel like you’re in that realm, but now I’m kind of trying to own that I am an artist. So, it was really cool to be with others and experience all that with them.”

For current students, Mr. Fisher hopes they also gained a few insights. “I think [the current students] were surprised at just how professional and polished the work was,” he said, noting that all six short films were made when the filmmakers were students at NSCAD. “I’m hoping they saw those films and they got a sense of where they should be aiming, as opposed to perhaps where they were aiming.”

The plan is to keep the momentum going. “For the very first year in COVID, it was remarkably successful,” Mr. Sarwal said. “I really want to build on that going forward and have it again next year, but bigger. Maybe three nights, more films, more events associated with it.” He said they plan to continue the hybrid format in the future and the alumni association is also working on events to showcase the work of NSCAD graduates in other disciplines.

For Ms. Kuelken, the festival was a valuable addition to the program and her experience. “I think film festivals are a huge part of being a filmmaker. It’s getting your stuff out there. And I think it’s good for universities to recognize the work of their students.” said Ms. Kuelken. “It definitely puts a fire under my butt to make and create and do my own thing,” she said.