Making lunch out of research leftovers.

A research facility at Vancouver Island University is taking the adage “waste not, want not” to heart.

The university in Nanaimo has supported sturgeon studies since 1984, and in 2011, it expanded its capacity to  research and harvest the fish by launching the International Centre for Sturgeon Studies. Despite the expanded facilities at ICSS, raising white sturgeon means space is a perennial concern. A species that’s been around some 100 million years, the sturgeon can grow up to six metres in length, weigh more than 840 kilograms (more than 1,850 lbs) and live until 150. All this makes the fish a wonder to study, but with new stock hatched every year, it’s a hassle to house.

Rather than send overstock to the landfill, Dave Switzer, a sturgeon culturist at ICSS, said it occurred to the researchers that the dense, flaky fish would be a good candidate for the smokehouse. “They are a beautiful fish and they produce an exceptional product, it would be a shame to waste this resource,” he said. Now when ideal specimens reach around two years old, they’re diverted to a local cannery where they are transformed into VIU’s line of hot-smoked, sustainably raised sturgeon in a tin. 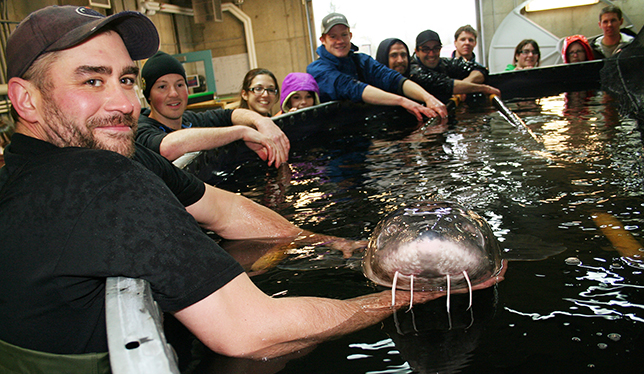 The limited-run line has been a regional hit, with more than 4,000 cans (that’s about 1,000 fish) sold in two years. Proceeds go back to ICSS’s operations budget but at $10 to $12 a can, “it nowhere near covers feed, water, electrical, wages … but it helps,” Mr. Switzer says.

Wild white sturgeon is endangered, so the canned cultivated fish from VIU offers eaters the chance to try what many cultures consider a delicacy. “Not many people get the chance to try sturgeon,” Mr. Switzer points out. “It’s very good on eggs benedict or in scrambled eggs.”