After more than a decade as a lawyer for prisoners, Kathy Ferreira is teaching her first university course, guiding law students in what could be their first encounter with a client. The responsibility comes with being the director of the Prison Law Clinic at Queen’s University, a position to which she was officially promoted last November.

Student experience is top of mind for Ms. Ferreira, who first got involved in the clinic as a student in 2000. Funded by Legal Aid Ontario, the clinic specializes in helping prisoners with parole hearings, grievances related to institutional treatment and disciplinary matters. It also has a long-standing educational mandate, currently offering 18 student placements through Ms. Ferreira’s fall-winter course, four paid positions during the summer and one articling position. The academic course is “very difficult to design because so much of the learning comes up front,” Ms. Ferreira says. Yet, “some essential things have to be imparted.” 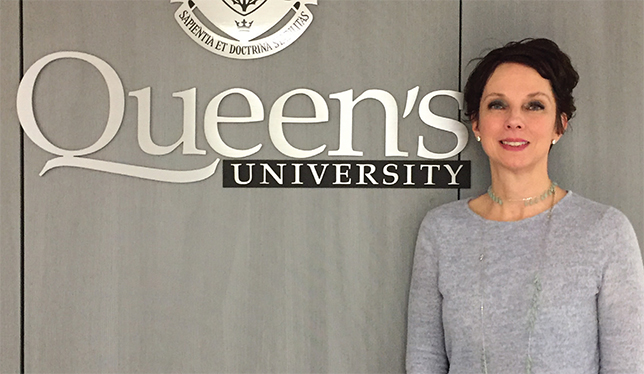 Kathy Ferreira is director of the Prison Law Clinic at Queen’s University. Photo by Nicole Clark.

The Prison Law Clinic is in downtown Kingston, Ontario, and serves eight federal penitentiaries. Under the supervision of Ms. Ferreira or one of two other clinic lawyers, students prepare research and advocacy materials and visit the penitentiaries to meet clients one-on-one. Regardless of their legal interests, the clinic – along with four others offered through the Queen’s faculty of law, specializing in elder, family, business and poverty law – provide a coveted hands-on opportunity.

Ryan Mullins, a second-year law student in the clinic interested in criminal law and sentencing, recalls that his first client meeting was at a medium-security prison to discuss a parole hearing with an inmate convicted of a serious offence. “Our role is to go to the interview, to understand the nature of the inmate’s grievance and then communicate that to our supervisor. We’re the conduit between the lawyers and our clients,” he says. “It’s a bit nerve-wracking, but … they appreciate the work that you do, and sometimes we’re the last people that are trying to help them out.”

By its nature, the Prison Law Clinic doesn’t provide “a uniform experience” for students, Ms. Ferreira says, “because the institutions aren’t uniform.” Often, the needs of a client at a maximum-security prison will be different from those of an inmate in a medium- or low-security facility, which means no two students have the same workload. “Right now, I’m trying to make the experience as equitable as possible for students,” she says.