Some universities push back the start date for the winter term

The pandemic-related pause is meant to give students, staff and faculty extra time to prepare and rest up.

Université de Sherbrooke is doing it. So are Concordia University and McMaster University, among others. Some universities are thinking about doing it. Others are saying no – at least for now.

“It” is the decision to delay the start of the upcoming winter semester due to the COVID-19 pandemic.

“Normally we wouldn’t have to do something like this,” said Christine Hudon, a history professor and vice-rector at U de Sherbrooke. “But these are extraordinary times.”

The university announced on November 4 that it was pushing back the starting date of its winter 2021 academic calendar by six days, to January 11. Since then, the idea has spread across the country, with several universities following suit and others pondering the move.

According to Dr. Hudon, the difficult switch to online classes when the pandemic hit in March, and then the launch of a hybrid formula of online and in-person classes for the fall, has placed additional stress on faculty members and students at the university. She said the university’s executive committee discussed delaying the start of the winter session in early October before consulting with the heads of the school’s faculties and the unions representing instructors, university staff and students. 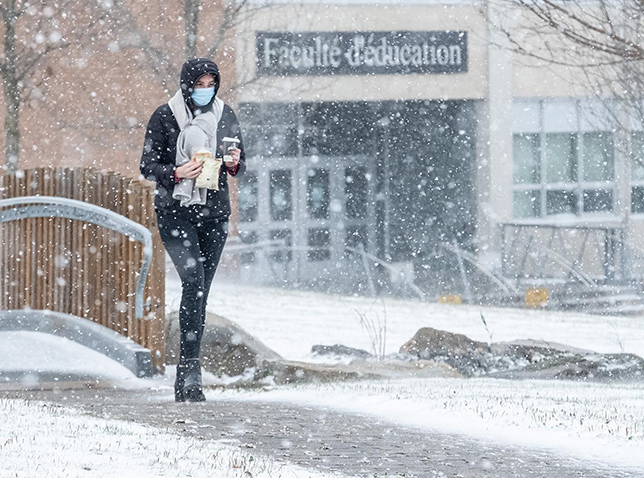 Students and staff at Université de Sherbrooke will have an extra six days of winter break. Photo courtesy of U de Sherbrooke.

“We thought it would be a good idea to give our professors and students a bit more time to rest and get some fresh air,” said Dr. Hudon. “No one complained.”

The six lost days will not be made up or have any impact on other key events like reading week or the exam period during what is U of Sherbrooke’s normally 17-week winter session, said Dr. Hudon. “We determined that we have enough time to do it.”

Other universities have followed suit with similar delays and justifications. Bishop’s University, in neighbouring Lennoxville, Quebec, announced that it was delaying the start of the winter semester by one week, to January 18, “to give students an extended break, to facilitate any required quarantining and to allow faculty and staff more time to prepare.” Université du Québec à Montréal has delayed its start to January 14.

Several universities in the Maritimes have also pushed back the start of their terms to allow for quarantining for returning students. At Acadia University, for example, classes won’t begin until January 17.

McMaster University, Western University and Laurentian University announced that they, too, will delay the start of their winter terms by one week, to January 11. The University of Toronto is doing the same for undergraduates and some graduate programs.

For McMaster, classes will be extended into the exam period to end the winter term as originally scheduled, and reading week will be held as planned in mid-February. Citing the need to support students’ wellness and mental health, McMaster provost Susan Tighe said in a press release: “This change will give faculty, instructors and staff the opportunity to spend their working time the week of January 4 on preparation for the winter term [and] gives students time to recharge and those who went home for their Christmas break the chance to isolate for an additional week to help limit any potential COVID-19 cases.”

Anne Whitelaw, interim provost at Concordia University, echoed those sentiments in an email sent to students announcing a similar one-week delay to the start of classes to January 13. The dates for dropping courses and paying tuition for the winter semester will also be delayed a week.

“Nearly eight months into the pandemic, we are hearing that many students are experiencing increased stress and fatigue, caused by the challenges and isolation of studying remotely, as well as feelings of uncertainty about the future,” said Dr. Whitelaw. She added that the library and other campus and student services will be closed during that time so that university staff can also enjoy the benefits of a longer Christmas holiday.

Though the university will maintain Quebec’s province-wide reading week in early March, both final exams and the start of the summer semester will be pushed back a week to make up for the lost time. “I appreciate this,” Concordia student Autumn Darey posted on Twitter following Dr. Whitelaw’s message. “We all need time to recover from this semester.”

The Student’s Society of McGill University appears to agree. It is circulating a petition calling on the university to delay the start of classes in January, but so far to no avail. Similarly, a petition asking the University of Victoria to postpone the winter term has garnered at least 1,500 signatures.

Bryn de Chastelain, president of both the Saint Mary’s University Students’ Association and the Canadian Alliance of Student Associations, applauded the push-back plans – although his school has not announced any change to its January 6 return date. “Overall I think it’s positive that schools are giving students more time to unwind or a chance to return to the community they’re studying in and self-isolating before returning to studies,” he said.

One concern he has, however, is the impact that the delays may have on international students who have to arrange flights to Canada. “It might cause issues for some,” said Mr. de Chastelain. “But overall I think it’s a good thing.”

In Western Canada, the University of Alberta appears so far to be the only institution delaying the winter term, with some exceptions, to January 11. As for the University of British Columbia, Matthew Ramsay, director of university affairs, had this to say: “UBC is actively monitoring COVID-19 and working with provincial and regional public health agencies to determine appropriate and flexible responses as required. At this time, the start date for winter term remains unchanged.”