The University of New Brunswick Woodsmen aren’t your grandfather’s lumberjacks.

While axe-throwing venues are popping up in cities across North America as an eclectic option for a night out, student athletes at a number of Canadian universities have been playing at it for decades.

Any given weekday, from September to November and January to February, the whine of chainsaws and thud of axes striking wood is a sign the University of New Brunswick Woodsmen are at practice on the Fredericton campus. This dedicated crew is keeping alive old-school lumberjack skills that modern forestry has made practically obsolete. “It’s kind of like rodeo,” says Woodsmen Emma Berton. “It’s one of those things from the past that are still fun, even if they’re not so relevant anymore.”

UNB is one of six postsecondary institutions in the Canadian Intercollegiate Lumberjacking Association, which formed in 1997. The crews meet four times a year for a variety of six-person team, doubles and individual events. Some, like the pulp toss, in which logs are thrown between posts, are deeply physical. Others are more about finesse. For the water boil, contestants get a small hunk of cedar, a hatchet and three matches. Whoever gets their metal canister of water boiling first, wins. 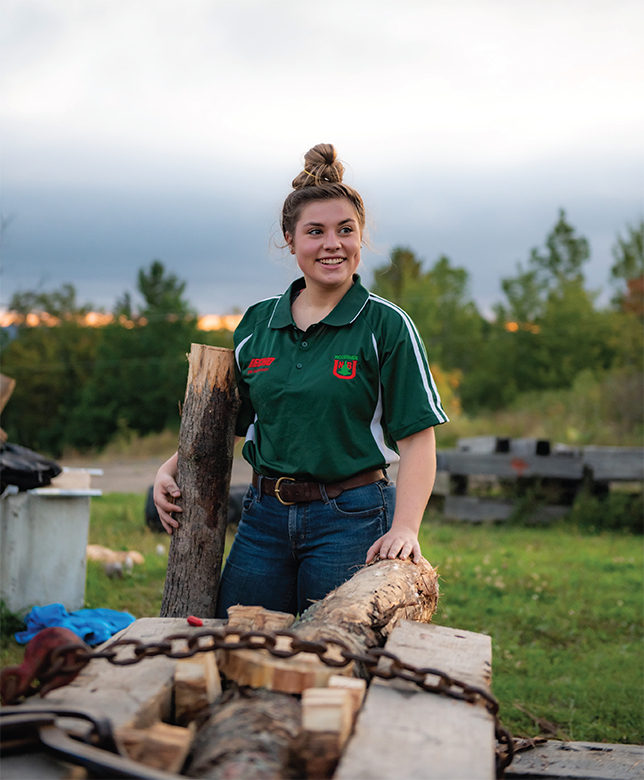 Alyssa van de Riet, a third-year civil engineering student, is a member of the University of New Brunswick’s Woodsmen. Photo by Scott Munn.

“I like the adrenaline rush,” says Brad Constantine, coach of the student-run team. “It’s a neat sport, trying to get a thing done in the quickest time possible.” He appreciates its history, too. “It’s almost a lost trade,” he says. “These are the skills that the New Brunswick forestry industry was built on.”

The UNB Woodsmen are neither all men nor all forestry students, as its founders in the 1960s were. The club is open to all faculties and women first joined in 1976; today about a third of the members are female, practicing alongside their male teammates.

“It’s more of a level playing field,” says member Alyssa van de Riet, who’s in her third year of an undergraduate degree in civil engineering. Unlike hockey, for instance, which many Canadians start playing almost as soon as they can walk, most loggersports athletes, male and female, first come to it as young adults.

Rookie Erinn Chambers decided to try out after seeing a demonstration during orientation week. Growing up in Miramichi, New Brunswick, a historical hub for the province’s logging industry, she had a sense of the forest’s relevance to the local economy and culture. But pole-climbing and axe-tossing were not part of her experience. “Not before two weeks ago,” she says.

Now, the second-year civil engineering student is getting an introduction to the tools – glinting axes, chainsaws, huge bow and Swede saws – and picking up the sport’s specialized vocabulary: “cookies” are round slices cut off the end of a log, peaveys are the poles used to move logs up and down a ramp in the log decking event; and “pound the vee” is slang for landing your log in the sweet-spot gap between two others. With every practice, Ms. Chambers is learning the sport – and preserving a bit of history.

“The important thing to me is keeping the sport alive,” says Mr. Constantine. “I’d like to see it pushed into the future, so generations down the road can enjoy it, as well.”