Students on Ice expedition brings the classroom to the polar regions

The award-winning organization specializing in educational forays into the Arctic and Antarctic celebrates its 20th anniversary next year.

Geoff Green is sporting a healthy tan and looking surprisingly relaxed at an early August reception at the Canadian Museum of Nature in Ottawa. True, he has just come off a 14-day cruise, but this was no luxury excursion.

Mr. Green has just returned from shepherding 130 high school and university students, and roughly the same number of educators, scientists, historians, elders, artists and support staff, on an expedition to Greenland and the eastern Canadian High Arctic. It was his 35th expedition to the polar regions since he founded Students on Ice (SOI), an award-winning organization specializing in educational forays into the Arctic and Antarctic, 19 years ago.

“Once you’re on the deck of the ship and we set sail, the expedition is the easy part,” he says. “It’s the more than one year of prep getting the ship and all the bits and pieces together that’s hard.” 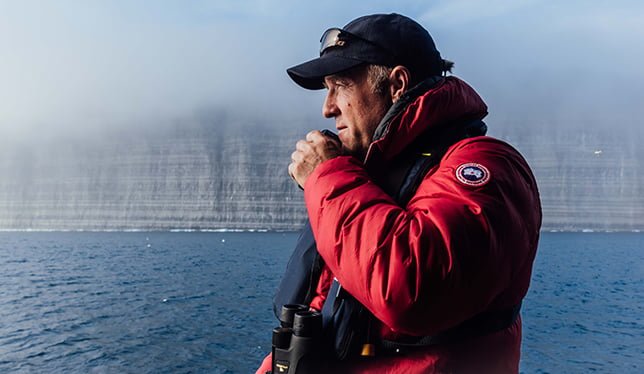 Expedition leader Geoff Green estimates he has taken roughly 3,000 students on expedition over the years. Photo by Martin Lipman.

As SOI closes in on its 20th anniversary next year, Mr. Green is particularly pleased by some of the milestones of this year’s voyage, including the fact that more than half of the students were Indigenous. As well, every circumpolar country, and every Canadian province and territory, were represented. Participants also hailed from other countries, including England, Ireland, Germany, China, Peru, Micronesia, the Seychelles and Monaco (Prince Albert II of Monaco is an SOI funding partner). That diverse reach is due to another milestone: 90 percent of this year’s students were on scholarships from a global network of partners who help cover the roughly $14,000 cost of the expedition, not including transportation to and from Ottawa.

Twenty-year-old Jesse Byrne from Qualipu First Nation in Newfoundland found himself on the MS Ocean Endeavour – SOI’s 137-meter floating home and classroom – through a scholarship from the Assembly of First Nations. Now a fourth-year biochemistry student at Memorial University, he had wanted to go on an SOI expedition since he was a teenager. 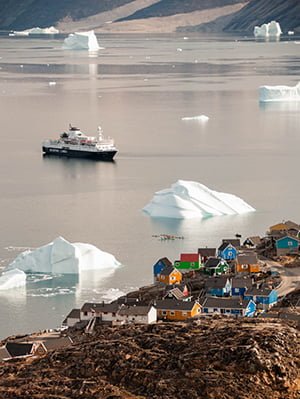 The MS Ocean Endeavour lies just offshore from the town
of Uummannaq in central-western Greenland.
Photo by Kim Aubut Demers.

“The Arctic has always been the most pristine, rugged, untouched place on Earth in my mind,” he says. “I then became familiar with the Arctic’s importance in global warming and climate change, which allowed me to take to a more academic viewpoint.”

The ship is equipped with advanced communications and navigation equipment, and a fleet of 20 Zodiacs for frequent shore landings and access to remote communities.  Mr. Byrne says those visits gave him a greater appreciation of Inuit culture.

“There is so much to learn from the people who have not only survived but thrived in extreme conditions,” he says. He says he was also impressed with how the Inuit are working with governments to create new conservation areas, employment and infrastructure opportunities within Inuit communities.

Mr. Green estimates he has taken roughly 3,000 students on expedition over the years, including his own two kids, Fletcher, 11, and Nellie, 8, who have been accompanying their dad since they were born.

He says the SOI concept came to him in 1999 while standing on Baily Head beach in Antarctica – one of his favourite places, which has one the largest colonies of chinstrap penguins in the world. He was already a teacher and expedition leader, mostly for groups of “tourists, scientists and wacky adventurers who were jaded, cynical and set in their ways.” Witnessing how the polar regions challenged and changed them got him thinking: “Imagine if we could give this experience to kids at the beginning of their lives, not at the end.”

A lot of people told him it was “the stupidest idea they’d ever heard,” he says. Twenty years later, he’s still proving the naysayers wrong.

Education is at the core of the SOI vision, and it happens every day of the voyage, says Pat Maher, an associate professor of community studies at Cape Breton University who took part in the expedition in 2009 and 2013. “For undergrad students, the real value is letting them see this amazing place and undertake some hands-on research or experiential learning,” he says. “You can’t say enough about the value of learning in situ.”

SOI expeditions travel to the Arctic annually and every few years to Antarctica. Dr. Maher says it is critical that people continue to go to these regions. “If people don’t see it, feel it, touch it, taste it, smell it, then they’re not going to care when some large company or government says, ‘oh, we want to drill for natural gas here.”

Shelly Leighton, an instructor with the ocean mapping program at Memorial’s Marine Institute, says going on an SOI expedition in 2017 was all about getting students out of the classroom. “They were the ones collecting specimens and doing all the hands-on work,” she says. “When they got back to the boat, I was there to tell them what they were looking at.” 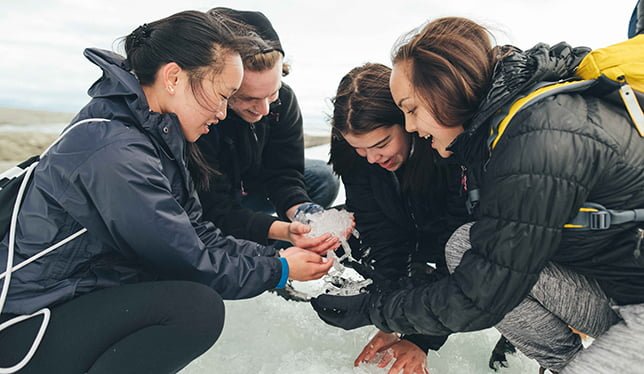 The learning is intense, but so are the personal and emotional experiences. Mr. Green says he realized early on that SOI needed to provide support for students “who had moments of struggle.” Now, “mental health is as much a component of our expeditions as polar bears and penguins,” with an on-board mental health and wellness team.

Seventeen-year-old Maddysen Kingmiaqtuq-Devlin says the cruise was “life-changing,” with moments of elation and intense sadness. “When elders talked about residential school, it was really emotional because we have to understand what the truth is, what the north and Indigenous people have struggled through,” she says. “That affects so many people … it affects the generations that come after.” 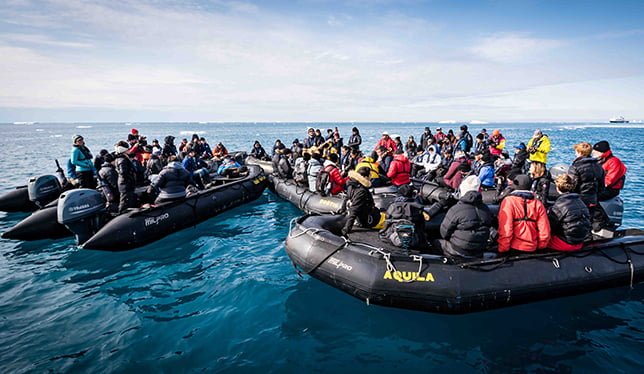 Expedition members gather together in Zodiacs before visiting the Ilulissat Icefjord, a UNESCO World Heritage Site, on the west coast of Greenland. Photo by Martin Lipman.

Ms. Kingmiaqtuq-Devlin, who lives in Inuvik, NWT, says she feels it is particularly important for Indigenous youth to be part of SOI. “This is where it all begins, especially with climate change,” she says. “You take what you have learned back to the community you live in and find a way to make a positive impact.”

Preparations are already underway for the 20th-anniversary expedition to the Arctic in 2020, which will sail from St. John’s to Iqaluit. Mr. Green says they will explore the coastline of Labrador, including the Inuit region of Nunatsiavut. The year 2020 is also the launch of the United Nations Decade of Ocean Science for Sustainable Development. Mr. Green says ocean health, and international and cross-cultural collaboration, will be a key focus of the expedition.

But, while SOI’s goal is to foster greater environmental awareness, Mr. Green is acutely aware of their own ecological footprint. “We’re burning a hell of a lot of fossil fuels – you get on a plane, then you get on a ship,” he says. “I would love to have an electric-powered ship. In the meantime, we try to mitigate, we try to make our journeys carbon- neutral by offsetting in the traditional sense, but I think the biggest offset is education. If we ever feel we are doing more harm than good, we’ll stop doing it.”