Chief scientists for Canada, Quebec and Ontario say the public needs to be more engaged with science and why it’s important.

The director of the Institute for Science, Society and Policy at the University of Ottawa, Monica Gattinger, likened the event to “having rock stars in the house.” Canada’s three chief science advisers took the stage at the university in late January to a near standing-room-only crowd of academics, scientists, researchers and star-struck students – many of whom scrambled to grab selfies with Canada’s chief science advisor Mona Nemer, Ontario’s chief scientist Molly Shoichet and the chief scientist for Quebec, Rémi Quirion.

The topic – “Science Advice in Canada: Are We Entering a New Renaissance?” – had the three science advisers in agreement that, yes, governments and the public are keen for advice on science policy, research and information. But, they warned, the science community needs to seize this opportunity and do a better job of communicating stories about science and why it is important.

“We need to restore public trust in science,” Dr. Shoichet said, citing statistics indicating 79 percent of Canadians are concerned fake news is damaging public perception of science. “Nearly 40 percent – almost two in five Canadians – believe the science behind climate change is still unclear,” she said. “Nineteen percent still believe there may be a link between vaccinations and autism.” 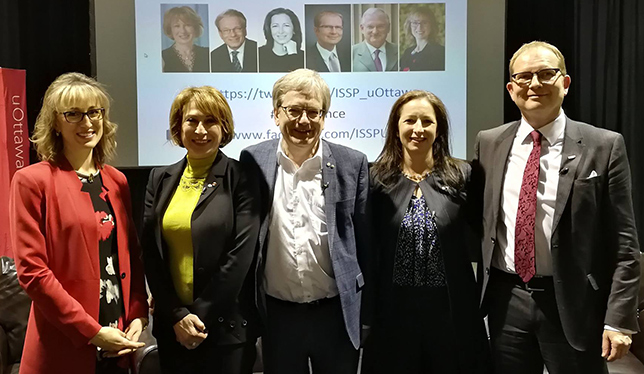 While most Canadians want to know more about science and how it affects their lives, she pointed to the controversy over perceived health risks from eating genetically modified foods as “a great example of scientists not explaining science to the public.” She added: “The first thing is to tell people what we are doing and why it is relevant. We have to let the public know they don’t have to fear change.”

Dr. Nemer, whose job is to advise the prime minister and cabinet on science, said promoting a better dialogue between science and the public is key. “Equip them to better understand science policies and the direction it is going,” she told the audience.  “Fourteen-year-old kids know a lot thanks to social media and the internet. We need to engage that next generation.”

PhD candidate Shawn McGuirck, who attended the panel discussion, said that’s putting a lot of pressure on students. “There also has to be some discussion about how the next generation needs to be supported to do this,” he said.

“Given only one in six students will end up in a professorship, students need to be made aware of the careers that are science-adjacent. Those careers are more in the public realm, so they will need communications skills,” he said. “For those who end up in a professorship, they need to understand that public outreach is an important part of being a scientist in Canada.”

Mr. McGuirk is studying biochemistry and doing breast cancer research at McGill University. He is also co-president of Science & Policy Exchange, a Montreal-based, non-profit organization run by graduate students and postdoctoral fellows which works to bridge the gap between academia, industry, government and the public.

That might mean “humanizing” scientists, said Mr. McGuirk. “The goal is to make sure that whatever science is being done is being translated back to the public in some way. Whether it’s by the scientists who are doing the research or communicators who can make that link.”