The Canterbury Tales, from the Middle Ages to your cellphone

A group of professors teamed up with Monty Python comedian Terry Jones to turn the prologue of The Canterbury Tales into a multimedia app.

Four historians from Canada and England have launched the General Prologue app, the first app featuring an audio performance of Geoffrey Chaucer’s The Canterbury Tales in its original 14th-century English.

“Here bygynneth the Book of the tales of Caunterbury,” says the expressive voice of the narrator. The strange Middle English words comprise the opening verse of the medieval masterpiece composed by Chaucer more than 600 years ago. The app, which launched on February 3, is available for iOS and Android users, and through a dedicated website.

The international team of scholars leading the project include Richard North, a professor at University College London in England; Peter Robinson, a professor in the College of Arts and Science at the University of Saskatchewan, colleague Barbara Bordalejo, a senior lecturer also at U of S, along with the late Monty Python comedian Terry Jones.

The 45-minute performance of the opening section of the Tales brings users back to the roots of the text. “We have several direct evidences that Chaucer was intended to be read out loud,” says Dr. Robinson, citing manuscripts indicating the text was performed live.

The Tales recount 24 stories that a group of pilgrims exchanged as part of a storytelling contest on their journey to Canterbury. Often ironic and comic, they shed a critical light on late medieval English society.

Dr. North explains that the idea for the app emerged in the early 2010s when he and a former student realized that multimedia apps are “a better way for readers to encounter Chaucer’s works than the paperback edition.”

The app certainly succeeds in immersing the user in the text. The screen scrolls through the digitized manuscript to the rhythm of the narrator’s voice. In a box that appears over the manuscript, users can read both the Middle English transcription of the verse being read and the Modern English translation, which was written by Jones. 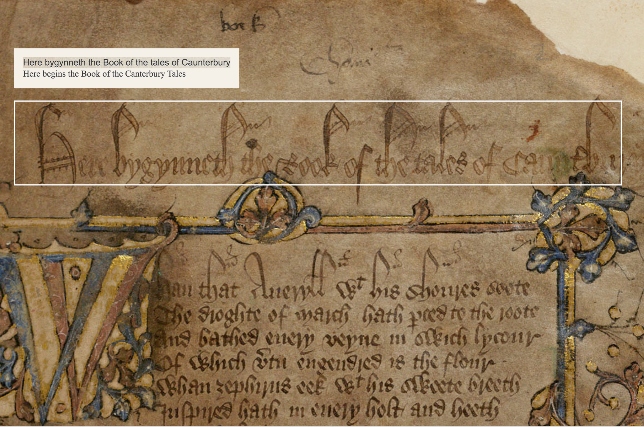 Screenshot of the General Prologue on the dedicated website.

The genesis of the project

In 2013, Dr. North brought the idea of the app to Drs. Robinson and Bordalejo. Then, Dr. North recalls, “Peter announced that Terry Jones was also in and we all had a pub evening and dinner with Terry in the Red Lion in Highgate in May [2013].” It is at the Red Lion that the project really took shape.

Aside from his work in the comedy group Monty Python, Jones was a respected scholar who had authored two books on Chaucer. He passed away on January 21 of this year. To celebrate his memory and the work he did on the translation, the team decided to launch the app on February 3, two days after Jones’s birthday.

Dr. Bordalejo established the transcription of the text, while Dr. North authored a new biography of Chaucer for the app. Dr. Robinson oversaw the app design and provided a wealth of supporting information included in the app.

The final piece of the puzzle, the narration, comes from Colin Gibbings’s lively rendition of the original Middle English text. Then an MA candidate in English at U of S and now a PhD candidate at the University of Calgary, Mr. Gibbings memorized the General Prologue before recording it in studio to hone its cadence and to play with the words.

“We had Terry Jones’s translation, which has his unmistakable Python-esque humour, that was a helpful inspiration,” explains Mr. Gibbings, who worked closely with Dr. Robinson to master the medieval text. “It really helped me convey the humour to the modern audience in a way that they would understand.”

Making the app took about three years cumulatively and roughly $20,000, estimates Dr. Robinson, plus $2,000 for recording the audio. The project was funded by University College London and the National Library of Wales, which provided a digitized version of the manuscript. The transcription comes from a broader project Dr. Robinson leads at the University of Saskatchewan funded by the Social Sciences and Humanities Research Council of Canada.

An “appetite” for the Middle Ages

Besides Chaucer enthusiasts, the app targets the general public. “We always intended it for the general reader, for those approaching Chaucer for the first time,” says Dr. Bordalejo.

Around 16,000 people downloaded the app within the first week, according to Dr. Robinson. “We’re very surprised and very pleased,” he says.

“There is clearly an appetite for the medieval European past,” observes Shannon McSheffrey, a professor of history at Concordia University. Dr. McSheffrey says this appeal translates into popular culture through films, books and videogames.

The General Prologue app constitutes a promising resource for teachers and professors. “I will assign it to students in my medieval England class next time I teach it,” says Dr. McSheffrey. “This is an amazing depth of multimedia material and it’s free. I actually think it’s a ‘wow.’”

Dr. Robinson says the team is working on releasing four to five more chapters of The Canterbury Tales.