After decades of grassroots work by Black scholars, a few universities have started offering Black Canadian studies programs. Will it be enough to start reversing what one professor calls Canada’s “Black brain drain”?

In 2016, Dalhousie University launched what seems to be the first minor on the subject in this country – and even getting that in place took years. Afua Cooper set about requesting the program after she was named to the James Robinson Johnston Chair in Black Canadian Studies in 2011. According to Dr. Cooper, the first time around, the approval committee said the program’s focus was too narrow. So, she rewrote it and brought it back a second time to a newly appointed committee – only to have it rejected, she recalls, for being too broad. The third time was the charm for Dalhousie’s interdisciplinary Black and African diaspora studies minor. “Students love it,” Dr. Cooper says, “whatever their race or ethnicity.” Her intro class takes upwards of 70 people and she says it always has a waiting list.

Dr. Cooper’s experience goes to show that despite the many decades of Black scholars teaching courses on Black scholarship in Canada, drawn-out administrative processes and their requirements have left these scholars and courses without an official home at most universities.

York University has a long tradition of Black studies courses and is home to the Harriet Tubman Institute, but it was just recently, in late 2018, that the school announced five new initiatives to support Black studies and students, most notably its Black Canadian studies certificate and the Black studies and theories of race and racism graduate program stream. Andrea Davis, coordinator of the certificate program and chair of York’s humanities department, said that these initiatives, including the hiring of world-renowned Black diaspora scholar Christina Sharpe, marks “an important moment in the advancement of scholarship in Black studies – both with a focus on Black Canada and in relation to the U.S. and the rest of the world.” And at the program launch last October, Rhonda Lenton, York president and vice-chancellor, noted that the certificate was born of student advocacy and students’ desire to see themselves reflected in the curriculum.

That desire from students is driving the push for Black studies at universities across the country. At the University of Toronto and Ryerson University, the Black Liberation Collective has staged protests and made demands for more Black faculty and a recognized Black studies program, among other things. In Montreal, a group of students and faculty members at Concordia University have been working for some time to create an official minor in Black studies. 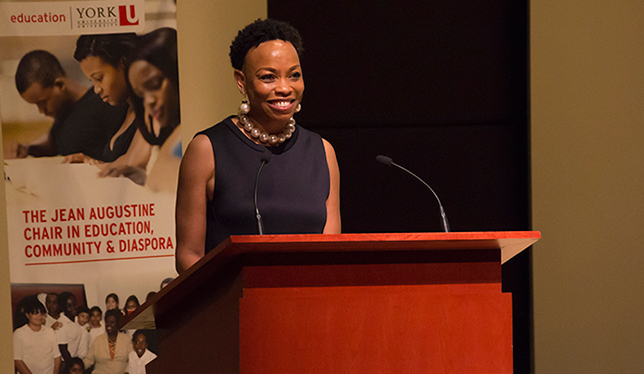 Andrea Davis, chair of the department of humanities and coordinator of the Black Canadian studies certificate program at York University. Photo courtesy of York University.

What goes into building a minor

Shannon Gittens-Yaboha completed an undergraduate degree at Concordia between 2013 and 2017, and now she’s back for a second. When she first started in postsecondary, Ms. Gittens-Yaboha took every single class she could find in African and Black studies, an experience that she says “changed the way I interacted as a student. As a Black student, you spend your entire academic journey … learning about Western culture and colonialism,” she says. “You spend all that time learning about white people, and as a Black student you have to hear your history as a secondary story to that primary narrative.”

But when all was said and done, she still had to work towards a minor in history, not Black studies as she would’ve preferred. In fact, she and four other students have hosted events in support of such a program at Concordia, including a student-organized conference called “Living Black Studies.” This year’s events, which took place in March, covered topics like citing Black sources and writing while Black, among others.

Concordia’s dean of arts and science, André Roy, says he received a letter of intent in May 2018 for an interdisciplinary Black studies minor from faculty members in the departments of English, history, geography, planning and the environment. As part of that process, they assessed the university’s current offerings that could be cross-listed under the new program. He says they found some 34 courses and 21 instructors on faculty that would fit the bill. But only seven of those faculty members are racialized minorities. “What is at issue is who’s going to teach in it, and whether we have enough Black scholars to make it a Black studies program that would be reflective of the Black experience,” he says.

The idea of offering a Black studies minor without the majority of courses being taught by Black instructors doesn’t sit very well with the dean, nor would it likely sit well with professors and students like Ms. Gittens-Yaboha who’ve been asking for it. With hiring requests already in for the 2019-2020 school year, Dr. Roy says recruitment of new tenure-track faculty members to get the minor off the ground won’t happen before 2020-2021 (though other preparations are unofficially underway).

“It’s a long process. Curriculum change, even for a minor, can take a year-and-a-half or two years, sometimes more,” he says, but the faculty of arts and science is “fully supportive of this minor” and “things are well aligned for this minor to happen.” He adds: “I think a minor is a first step. I think we should have something that’s much more encompassing of Black studies … The program so far comes mostly from the humanities departments, but it could have a much broader scope if we think of the contributions of Black scholars throughout the university.”

Still, the students and professor Ted Rutland, who has supported their efforts, say it is disappointing that the university hasn’t made Black studies a more immediate priority, especially since Concordia has acquired archives from Black community organizations, including the Negro Community Centre. They say it would be a good opportunity to fully delve into this rich local history, and to advance the careers of Black scholars – particularly since Concordia currently has so few.

The Black Canadian Studies Association – which celebrated its five-year anniversary at the Congress of the Humanities and Social Sciences in June (though not without some controversy that reinforced the group’s importance) – is another way scholars have circumvented slow-moving administrative procedures and created a space for Black studies in Canada.

Still, with Black Canadian studies in its infancy in Canada, it will take more than a few committed faculty members and students to help it continue the momentum of these first steps. Charmaine Nelson, an art history professor at McGill University who runs blackcanadianstudies.com, thinks that for a start, Canadian institutions can do better than a minor or a certificate program. “As much as this is progress, we need a major,” Dr. Nelson says. “Putting a minor on the books is a way for [administration] to not have to invest in infrastructure. They’ll rely on who they already have on the ground, they will not invest in new hires, or new tenure-track people.” (A suggestion Concordia’s Dr. Roy disagrees with.) A degree major, on the other hand, secures funding for new faculty and could help reverse what she calls a “Black brain drain.”

Bedour Alagraa’s experience is a good illustration of this phenomenon. Dr. Alagraa completed her undergraduate degree in political science at the University of Toronto before pursuing a master’s in race, ethnicity and postcolonial studies at the London School of Economics in the U.K., and a PhD in Africana studies at Brown University in the U.S. Although she had to leave Canada to pursue Black studies in the way that she wanted, she credits Canadian scholars such as Rinaldo Walcott at U of T’s Ontario Institute for Studies in Education, Katherine McKittrick at Queen’s University and Dionne Brand at the University of Guelph with providing her a base-knowledge in the field.

“Even without formalized institutional space, I had a Black studies education that came from so many places. From my peers, from Black faculty at other institutions,” she says. “It actually made me realize that so much was being generated even in the absence of these formalized institutional spaces; that it’s actually quite remarkable what people have managed to do, even given these institutional roadblocks and bottlenecks,” says Dr. Alagraa. In short, Black studies has always happened with or without the four walls of a university classroom and promise of a degree.