The life of a voluntary cyborg

Carleton University grad student Tamara Banbury went from studying to being a part of the voluntary cyborg culture.

A former long-haul trucker, dockyard operator and logistics office manager, she’s now making headlines for her study of voluntary cyborgs, a nascent subculture of people, including herself, who willingly insert gadgets into their bodies to enhance or augment physical or cognitive performance.

“I get one of two reactions from people when I explain or demonstrate the concept of implanted tech: ‘oh cool!’ or ‘ew!’” says Ms. Banbury, who has a glass-encased, rice-grain-sized microchip implanted in each hand.

She uses the one in her right hand, which can be read by a smart phone, to perform a digital-age parlor trick: sending people who scan the chip to her favorite music video on YouTube. The other chip has RFID (radio frequency identification) technology of the type used in contactless smart cards, which Ms. Banbury believes has the most practical potential. 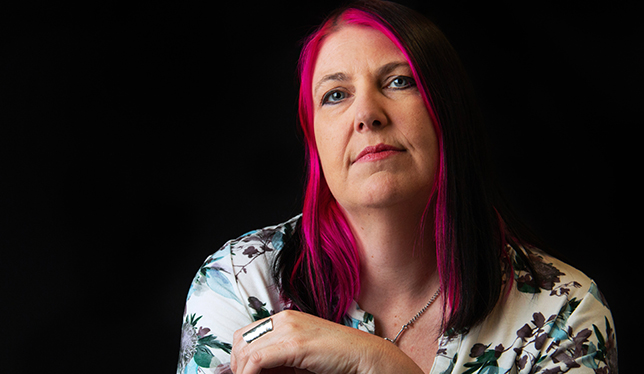 “We now have tap-and-pay on cards and on our cellphones, which are always in people’s hands,” she says. “Imagine the ease, convenience and security of having that technology under your skin.” She adds that people who might be “weirded out” by the idea now “might feel differently when it becomes more common. Society accepts technology when convenience overcomes the perceived risk.”

Ms. Banbury’s improbable journey to voluntary cyborg both as an academic pursuit and a way of life started in 2010 when, at age 37, she enrolled as a part-time student in computer information systems at Calgary’s Mount Royal University. “I did it to upgrade my skill set for the job market,” says Ms. Banbury. She also decided to volunteer at the nearby Military Museums, which is notably staffed with active-duty soldiers, some of whom have lost limbs in overseas combat missions.

“Some had really interesting prosthetics,” Ms. Banbury recalls. “I talked with them a lot about how they integrate their new limbs into their perceptions of themselves. It really got me interested in the issue of how people deal with technology externally and internally.”

After switching to anthropology as a full-time student (she graduated in 2014), Ms. Banbury found her academic calling in 2016 at the BDYHAX Conference, a now-defunct annual conference exploring human enhancement through “body hacking, gene therapy, body modification and wearable technology.”

“A light went on,” said Ms. Banbury, who subsequently enrolled in Carleton’s master’s program in law and legal studies. “My goal became understanding how technology influences people and vice versa.”

Last August, she successfully defended her thesis, entitled “Where’s My Jetpack? Online Communication Practices and Media Frames of the Emergent Voluntary Cyborg Subculture.” She is now enrolled in a PhD program at Carleton in communication and media studies.

At its most prosaic, voluntary cyborgs can be considered to include people with pacemakers, cochlear implants or any other implanted mechanical device that keeps them alive or enhances their lives. In recent years, however, many voluntary cyborgs have undergone risky and high-profile procedures and self-experimentations – or DIY biology – that go far beyond medical and prosthetic applications, pushing the boundaries of human science, law, sports, entertainment and ethics.

According to Ms. Banbury, voluntary cyborgs – “grinders” in body hack parlance – generally identify with transhumanist and biopunk ideologies. But, “we’re not like the punks of the 1970s with the readily recognizable hairstyles and clothes,” she says. “We are hidden in plain sight.”

She adds, however, that the small but growing online community of voluntary cyborgs is eager for mainstream acceptance and widespread adoption of their practices. “It all boils down to body integrity and body autonomy and being able to do what we choose with our bodies,” says Ms. Banbury. “If I want to plant something in my hand, how does that affect anyone else?”