The number of women in varsity coaching is on the decline

The federal government, USports and a team of researchers hope to encourage more women into university-level coaching jobs.

Coaching in sport has historically been male-dominated, even for women’s teams. When Jenessa Banwell was coaching women’s soccer at the University of Toronto in 2011, she quickly noticed that there were barely any other female coaches around. The few that were there were assistant coaches like herself – with even fewer in head coaching positions. Feeling increasingly like the “token female,” she finally decided to give up on the profession.

Ms. Banwell couldn’t shake the thought that the lack of women coaches at the varsity level could easily be rectified. Other sectors that were traditionally male-dominated (think medicine, law) have increased the number of women working in them, so what’s the barrier in sport? She decided to pursue this question as a PhD student in the faculty of kinesiology and physical education at U of T in 2014.

This is an issue that is causing concern for many, both in academia and outside of it. Currently, only 16 percent of head coaches at the university level are women, a percentage that has been declining in recent years.

According to Lorraine Lafrenière, chief executive officer of the Coaching Association of Canada, research shows that women deselect themselves for job opportunities “whereas men will look at a job advertisement and they will say ‘Oh, I will learn this part of the job advertisement on the job.’ Women will say ‘Well, I don’t have all of the qualifications, so I shouldn’t apply.’” Another reason Ms. Lafrenière cites for the lack of women in the field is the language used in job advertisements. “[It] doesn’t usually resonate with women,” she says. 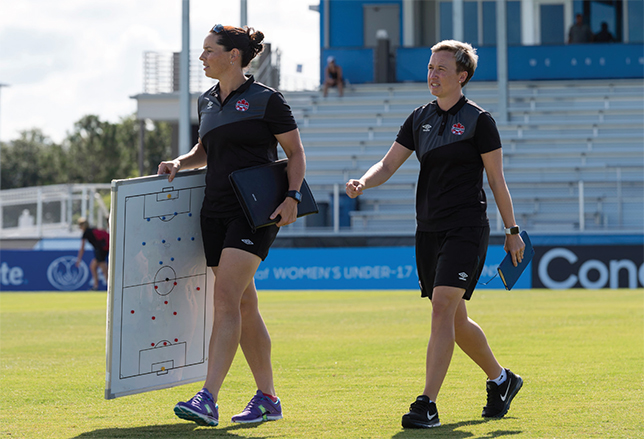 Ms. Lafrenière was part of the Working Group on Gender Equity in Sport struck by Kirsty Duncan during her time as Minister of Sport in the previous federal government (the role no longer exists in the current cabinet). She is hopeful that some of the recommendations that came out of it will help to improve the situation. Among those is the recommendation to achieve gender equity across all levels of sport by 2035, as well as a specific recommendation about increasing the number of female coaches.

So where to start putting these recommendations into action? The working group’s final report was submitted to Sport Canada, the federal body responsible for sport, in 2018, and the organization says it has already begun implementing some of the recommendations. Meanwhile, USports, the organizing body for varsity sports in Canada, is looking to replicate an initiative the Canadian Collegiate Athletic Association (CCAA) has had in place for several years now.

“We are working on – and this is very early stages – a potential coach apprentice program similar to what the Canadian Collegial Athletic Association has done to try to increase that number [of women coaches] and improve the flow from being a female student athlete to being a female coach in our system,” says David Goldstein, chief operating officer at USports.

This is encouraging news to Ms. Banwell, whose research shows that enhancing mentorship and even implementing some male-driven sponsorship of women coaches can make a huge difference for women in coaching positions. “A lot of times sponsorship is prompted by those who are educated, those who understand that the lack of women is a real thing.” She adds that part of the problem is that men often don’t realize that women are being passed over or not thought about when key decisions are being made. “We know that teams perform better when they have representation from men and women. They bring different styles of thinking, different leadership styles. I think if men were better educated on some of the barriers that women are facing, they might understand the issue a bit more.”

Ms. Lafrenière notes that to be effective, sponsorship must involve a well-considered strategy and follow-up in addition to the mentorship. “The idea is that it’s not a box you tick […] it’s actually a development plan for a woman that intentionally puts her in leadership roles so she is perceived by the athletes, the personnel and peer coaches as a leader and in a leadership position.”