The pain remains, one year after the downing of Flight 752

Universities mark the first anniversary of the plane crash in Iran that killed 176 people, many connected to Canada’s academic community.

In 2020, Zahra Abbasi, a postdoctoral fellow at the University of Waterloo, saw her work published in six different journals. Each one brought a swell of grief. Beside Dr. Abbasi’s name, among her co-authors, is that of her mentor Mojgan Daneshmand. “I dedicate everything to her,” said Dr. Abbasi.

Dr. Daneshmand and her husband Pedram Mousavi, both professors of engineering at the University of Alberta, were, together with their two daughters, among the 176 people killed aboard Ukraine International Airlines Flight 752, which was shot down by a surface-to-air missile minutes after taking off in Iran on January 8, 2020.

Among those who perished, 138 had connecting flights to Canada, including dozens of students, faculty and alumni from at least 21 Canadian postsecondary institutions.

Tributes to the victims

To mark the one-year anniversary of the tragedy, universities across the country paid tribute to those who lost their lives. On many campuses, flags flew at half-mast and people gathered online in public and private forums to mourn.

“All of us continue to work, learn and teach in their honour, and to carry on their legacy,” said U of A president Bill Flanagan, in a statement. “We will not forget the contributions of these remarkable individuals.”

At U of A, where the campus is largely empty due to COVID-19 restrictions, students and staff were asked to pause in remembrance of the 10 students and faculty who died in the crash.

In Toronto, 176 representatives of families of the victims walked from the University of Toronto’s downtown campus to City Hall, a rare in-person public gathering given the pandemic. Attendees wore masks emblazoned with a symbol of a plane running through a heart. They carried posters with photos of the passengers.

In Windsor, Ontario, the city partnered with the University of Windsor to build a memorial along the riverfront in recognition of the five students and scholars with ties to the university who died as they were returning from holiday visits. “They represented everything that we hold dear – hope for a future of commitment and accomplishment, and the successful search for a place in life where dreams can become a reality,” U of Windsor president Rob Gordon said in a statement.

Students and staff are still grappling with their grief. U of Waterloo’s Dr. Abbasi said she struggled to complete the last months of her PhD and experienced panic attacks.

After his partner, U of A student Saba Saadat, died in the crash, Daniel Ghods-Esfahani left medical school at the University of Calgary and moved to Edmonton to be close to family and friends. He took a year off and worked with the Association of Families of Flight PS752 Victims. This fall, he restarted his medical studies, but now at U of A. He will be part of what might have been Ms. Saadat’s graduating class of 2024 – a letter offering her an interview for admission to the med school arrived in the mail after her death. “I feel a sense of responsibility to pursue this field, in a way, for both of us,” he said.

Others are continuing research started by scholars who perished, a process slowed further by the pandemic. Meghan Riddell, an assistant professor in the department of obstetrics and gynecology at U of A, has submitted a paper that grew out of Ms. Saadat’s undergraduate research work looking at the placenta and pregnancy complications. “She was a PhD disguised as an undergraduate,” said Dr. Riddell.

In June 2020, Ms. Saadat and four other U of A students killed in the crash were recognized with posthumous degrees during an online convocation ceremony.

At the University of Guelph, colleagues of Ghanimet Azhdari have committed to carrying on her work. The PhD student, who was born to the Indigenous Qashqai tribe in Iran and became an expert in participatory mapping, was working with Indigenous communities to translate their knowledge of the biodiversity of their lands and waters. Although COVID-19 made fieldwork impossible for much of 2020, her projects are ongoing, said U of Guelph associate professor Faisal Moola, her PhD supervisor. “She is there in terms of the work that she had hoped to do and that we hope to complete,” he said. 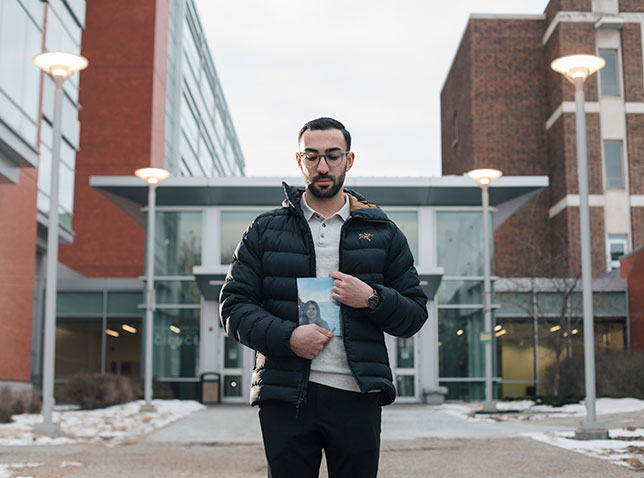 Daniel Ghods-Esfahani holds a photo of his girlfriend Saba Saadat, a University of Alberta student who died in the crash of Flight 752. Photo courtesy of The Canadian Press/Amber Bracken.

The Ontario government created 57 Ontario Remembrance Scholarships, valued at $10,000 each, in honour of the 57 Canadians who died in the crash. Dozens of other awards have been created across the country, including the Iranian Student Memorial Scholarship at the University of Toronto, which supports Iranian students and students of any background pursuing Iranian studies.

Funds from the U of T scholarship were also used to create the Dr. Razgar Rahimi, Farideh Gholami, and Jiwan Rahimi Award, named for a young family who perished in the crash. Mojan Majid, a computer science student from Iran, is the inaugural recipient. “It has been a great help,” said Ms. Majid from her home in Iran, where she is currently taking online courses. She plans to begin in-person classes at U of T in the fall.

The downing of Flight 752 represents “the biggest loss of talent in [the] recent history” of the Canadian science community, which had more than 80 members on board, said Mehrdad Hariri, an Iranian-Canadian and CEO of the Canadian Science Policy Centre. He said the various scholarships will foster relationships between Iranian students and Canadian academic institutions.

Dr. Hariri added that he hopes Canadians continue to remember those lost in the crash and hold Iran accountable for violations of international law. “Listen to the families’ quest for justice,” he said.

The Government of Canada designated January 8 National Day of Remembrance for Victims of Air Disasters in honour of the victims of Flight 752.