New station connecting York to downtown has been decades in the making. 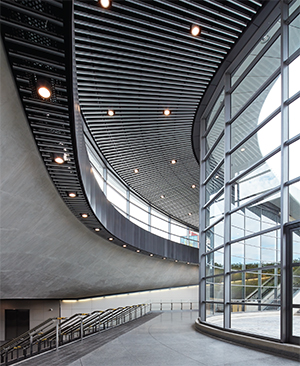 In December, York University will get its own subway station. The $120-million facility is one of six new stops in the Toronto Transit Commission’s Toronto-York Spadina Subway Extension project, which expands the city’s transit infrastructure into the municipality of Vaughan. The idea for the expansion is older than some of York’s current students, dating back to the early 1990s.

The university’s location in Toronto’s northwest has historically positioned it as a commuter school, with less transit available than had it been located in the downtown. Many students, staff and faculty had to either drive to the university or take a bus.

Joanna Kervin, director of third party, planning and property for the TYSSE project, says that the new extension, which brings riders directly to York’s central common, will make trips to the university much faster and more reliable, while also significantly reducing the amount of road traffic in and around the campus. Within three years, the station is expected to see an average of 26,900 commuters a day.

She says “this station is going to transform the campus. It’s going to connect this area to so many other places in the city by transit instead of  by bus. That really changes how people travel, how they plan their activities. It’s really a significant change in lifestyle.”

Designed by Foster + Partners with Arup Canada, the station features a unique design element, what Ms. Kervin calls a “light scoop”: a cut-out next to the station allowing for a two-storey glass curtain wall that lets natural light into the subterranean structure.

For York president Rhonda Lenton, the station’s opening, scheduled for December 17, is all about access. “I am passionate about increasing access to postsecondary education and part of [that] access includes the ease and affordability of getting to campus – the new [station] is a dramatic improvement,” she says. “York University sits at the heart of this new connection in the GTA, and I am optimistic about the new opportunities that will come.”

The future TTC map. Image courtesy of TTC. Click the image to see a bigger version of the map.
COMMENTS
University Affairs moderates all comments according to the following guidelines. If approved, comments generally appear within one business day. We may republish particularly insightful remarks in our print edition or elsewhere.