The Earthquake Engineering Research Facility is studying the dangers of seismic instability.

In a time when disasters seem to be a daily occurrence, it can be hard to look beyond the challenges at hand. But in places that are vulnerable to earthquakes, preparing for the unknown is vital. This is the reasoning behind the University of British Columbia’s Earthquake Engineering Research Facility (EERF), which hosted an open house on Oct. 21 for International ShakeOut Day  – one of many such events taking place worldwide to raise awareness of the dangers of seismic instability.

Founded in 2003, the EERF houses two state-of-the-art shake tables: platforms attached to digitally controlled pneumatic cylinders that can mimic the motion of a powerful earthquake. The larger of the two currently holds a replica of a two-storey building that is being used to test construction materials for the B.C. Ministry of Education. The table can move up to a metre along a single plane, allowing researchers to measure the formation of cracks in walls and measure how far nails pop out of plywood. 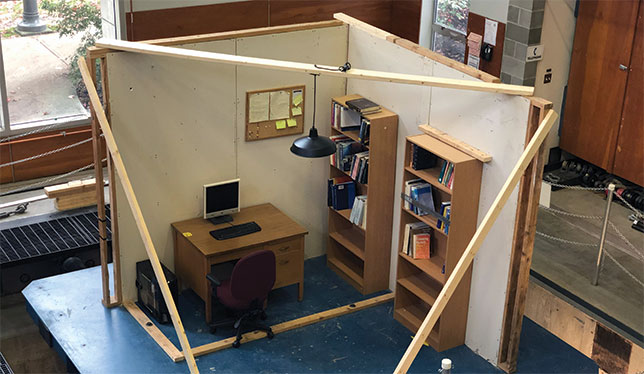 “We keep increasing [movement] until we find an intensity that starts really destroying things,” EERF director Carlos Ventura explained. “This is how we determine capacity.” These sorts of tests were used in the development of guidelines for the seismic retrofits of schools currently taking place all over the province.

For the ShakeOut event, the lab used the smaller of the two tables, which can move along multiple axes — up and down as well as side-to-side — and can create a force up to two times that of gravity. This table is often used to test non-structural elements such as the computer equipment used to operate hydroelectric dams.

Facility staff dressed the platform as a small office or work area in an apartment, including a solid-looking desk, shelves full of heavy books, a computer and a desk chair on wheels. The idea was to shake the room and “see how the books go flying,” said Dr. Ventura.

He believes that events like the ShakeOut are particularly important on the coast of British Columbia, which sits along the Cascadia subduction zone. Though Vancouver itself sees fewer quakes than the regions to the immediate north and south, scientists have long warned of the possibility of “the Big One,” a quake of nine or more on the Richter scale that would cause extensive property damage and endanger countless lives. “In a sense, we are lucky, but one day we will not be,” he said.