Thanks to researcher Shannon Berch, UBC might be the first Canadian university to successfully cultivate the pricey foodie staple.

Just past the apple orchard and beehives, but not quite to the hop vines and blueberry patch, sits a stand of about 35 young English oak trees at the UBC Farm. Spaced evenly apart and with relatively few weeds around their bases, these trees look to be one of the most nondescript plots at the 24-hectare, Eden-like farm. But if you were to dig into the dark earth near those trees, you just might soon find one of the most sought-after — and expensive — fungi in the world: the Périgord black truffle.

At least that’s the hope of Shannon Berch, an adjunct professor in the faculty of land and food systems at the University of British Columbia. Welcome to the first and only truffle farm (aka a truffière) at a Canadian university. About 10 years ago, Dr. Berch and a few others began planting English oak seedlings here inoculated with the Périgord (Tuber melanosporum), a truffle species native to southern France that’s been known to fetch up to $2,000 a kilo. The hope was that in several years the black, bitter tubers smelling strongly of undergrowth, strawberries and wet earth might be sniffed out by specially trained dogs. 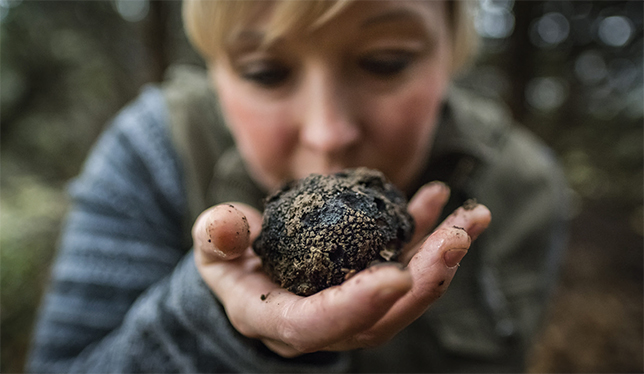 Back then, Dr. Berch wasn’t even sure truffles could be successfully grown in British Columbia. Her background is in mycology and soil biology, so she was well aware that truffles are typically found in the temperate regions of Europe, however they were being grown commercially in different parts of the world, including the U.S. Could that also include parts of B.C.?

She decided to give it a shot and with a few other academics, farmers and interested parties, started the Truffle Association of British Columbia. The hope was that the association and the truffière at UBC might spur some interest in a commercial truffle industry in the province, and some best management practices for farmers.

It seems to be working. Dr. Berch, who recently retired from the BC Ministry of Forests where she also worked as a research scientist, estimates that there are now between 20 and 30 truffle orchards spread out between the southern part of Vancouver Island, the lower Fraser Valley and the Okanagan — the three areas identified as having the ideal climatic conditions for truffles in the province.  Since it can take over 10 years to produce truffles, only a couple of the province’s truffle farms are successfully growing and selling the tubers on a commercial scale right now. Restaurants are the major buyers, but some individual foodies with deep pockets are snatching them up, too.

Back at the UBC truffière, Dr. Berch says she has her “fingers crossed” that it will start producing Périgords this winter (hopefully in time for the association’s Truffle Fest at the UBC Farm in late February). The thought is that the eventual income from the truffles will cover the costs of maintaining the truffière. But as with all truffle farms, it’s been a long road marked with lots of challenges to get to this point. The anticipation is palpable. “Imagine the joy of being out there with a trained truffle dog and actually finding truffles,” says Dr. Berch.

“At the beginning of this whole experience,” she continues, “I would tell people that we don’t know if truffles can be produced here. But now we know they can, and we can say here is some reasonably good guidance on how to do it right. That’s been incredibly wonderful and rewarding to be a part of.”