That was the theme of third annual reconciliation forum, held at University of Manitoba.

More than 350 leaders from universities, colleges and Indigenous communities gathered at the University of Manitoba for the third annual Building Reconciliation Forum. The theme for this year’s event, held on November 8 and 9, was “The Journey Toward a Reconciled Education System.”

In response to the 94 calls to action issued by the Truth and Reconciliation Commission of Canada in 2015, educational leaders, academics, students and Indigenous people from across the country came together to share what is currently being done at postsecondary institutions to make reconciliation a reality, and to discuss what still needs to happen at the institutional level.

At a president’s panel held on the first day of the forum, Ralph Nilson, the president of Vancouver Island University, said his institution has been involved in numerous initiatives to help overcome the challenges and barriers Indigenous people and communities face when it comes education and access. “About four years ago, we said no child aging out of [child and family services] here in B.C. is going to pay for tuition,” said Dr. Nilson. VIU was the first postsecondary institution in the province to offer such a tuition waiver.

In B.C., children and youth who are in care leave the system at age 18. According to a Statistics Canada report, in 2011, Indigenous children represented nearly half of all children in foster care in the country. VIU has had 34 Indigenous students claim the tuition waiver since the program started in 2013.

Dr. Nilson noted, as well, that Indigenous elders at VIU are paid the same scale as faculty with PhDs as recognition of the value of traditional knowledge. VIU has approximately 15,000 full-time and part-time students, with 1,600 students who are Indigenous.

But challenges remain for universities. These include burnout of Indigenous faculty because they are in such high demand at their universities, working with many Indigenous chiefs who may have differing views about what’s needed, and keeping an active relationship with people and communities in the north. Remaining committed to the Indigenous vision and initiatives is also a key challenge, Dr. Nilson said.

An Indigenous student panel followed, where participants shared their experiences at university and their take on reconciliation. One of them was Chance Paupanekis, a Muskego Ininew (Swampy Cree) who is completing his bachelor of arts degree at the University of Manitoba, and who served as co-president last year of the University of Manitoba Aboriginal Students Association. “When I was [co-]president, that was one things the students addressed to me, that there needs to be language degrees, not [just] programs,” said Mr. Paupanekis. 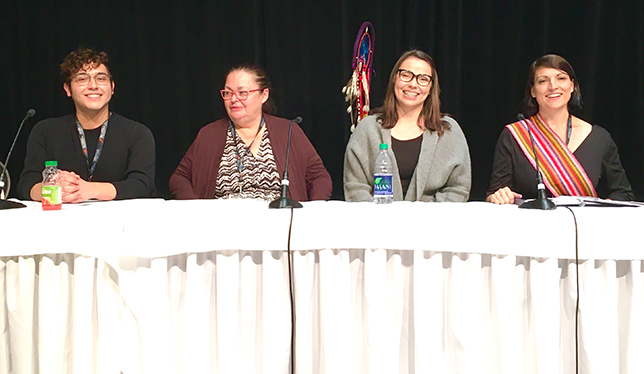 Laura Forsythe, a Métis from the Red River Settlement and a master’s student in Native studies at U of M, echoed Mr. Paupanekis. “I am in the homeland of the Métis nation and we don’t offer Michif here,” she said, referring to the language of the Métis people.

For the students on the panel, the importance of language and culture came up often. They also mentioned how universities are very much like a second home to them, and how crucial it was to feel supported by their peers.

Part of advancing reconciliation and creating pathways to Indigenous achievement is through Indigenous faculty recruitment, a subject discussed in its own session at the forum. Kristina Bidwell, associate dean of Aboriginal affairs in the College of Arts and Science at the University of Saskatchewan, asked the forum to imagine what universities would be like if there were Indigenous faculty in all departments, at all academic ranks and at all levels of leadership.

Dr. Bidwell said that Indigenous staff and faculty would bring their diverse cultures with them to universities. Students would see Indigenous knowledge and cultures as intrinsic parts of their degrees, and the classroom would become a place of relationship between Indigenous people and Canadians, which could become a powerful step towards reconciliation. She admitted that her university is still a long way from that vision, but she said they are slowly getting there.

One strategy at U of S, described by Lawrence Martz, is the university’s Aboriginal recruitment committee that helps with the selection and hiring of new Indigenous faculty and staff. The committee is made up of Indigenous faculty members, women and other representatives. A diversity support specialist will also be added to the committee. Dr. Martz added that it is important for them to know that they are hiring a candidate based on their vision of reconciliation, whether it be through a candidate’s research, scholarship, role modeling, community engagement or leadership.

The forum also heard from survivors and elders who shared their stories and experiences. Indigenous filmmaker and PhD student at the University of British Columbia, Jules Koostachin, was present to share her film about trauma and hope, Without Words. Participants also had the opportunity to visit the National Centre for Truth and Reconciliation on the U of M campus.

The University of Victoria will host next year’s forum.