Following a roundtable discussion about what becoming a Canadian means to them, 40 new Canadians stood up to sing O Canada. Lead by a university choir, the singing of the anthem ended a special citizenship ceremony held at Carleton University on April 4.

“This is one example of the beautiful things life sometimes offers to us,” said Raúl Razo-Garcia, a Carleton economics professor who was among those to take the citizenship oath that day, while standing next to his two children. “It was a very special occasion for me and my family because Carleton opened the door for us to Canada. Now, after nine years, we became Canadian citizens at the same institution that hired me.” 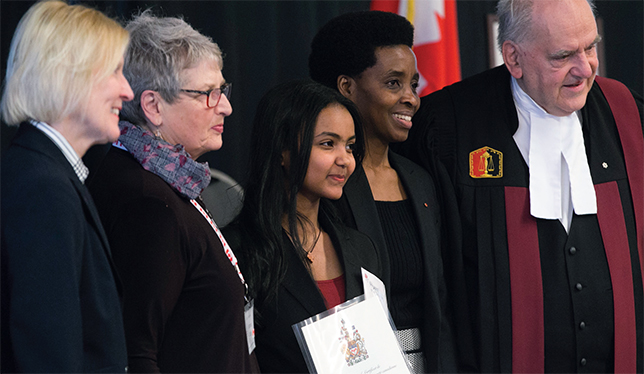 Two new Canadian citizens are flanked, on the right, by the presiding official George Springate and, from the left, Carleton University president Roseann O’Reilly Runte and Barbara Clubb from the Institute of Canadian Citizenship. Photo by Chris Roussakis.

The ceremony was one of the ways Carleton is celebrating its 75th anniversary this year as well as to mark the 150 years since Confederation. The University of Calgary and Luther College, federated with the University of Regina, are also set to host their own citizenship ceremonies this summer as part of Canada’s sesquicentennial celebrations.

Hosting a citizenship ceremony is “a fantastic role that universities can play for Canada 150, presenting them as places where everyone is welcome,” said Janis Hass, senior communications specialist at Universities Canada. The association has compiled a list of more than 600 events and activities organized by universities throughout the year to mark the anniversary. Campus events range from lecture series and book launches to art exhibits and musical performances. “As convenors of people and ideas, universities are ideal venues for sesquicentennial celebrations and discussions on Canada’s past and future,” said Ms. Hass.

Some universities are getting rather creative about how to mark the anniversary. As part of LandMarks 2017, for example, faculty members from 16 universities are collaborating with Canadian curators and contemporary artists to develop courses around the role of art in creating cross-cultural dialogue and inclusivity.

At OCAD University, the LandMarks course ran in the winter semester, during which nearly a dozen graduate and undergraduate students of multiple programs went on field trips to public art sites, engaged in discussions about how land embodies national identity, and learned from curators and artists selected as part of this federally funded Canada 150 “signature” project.

“What we were trying to do is basically ask students to consider what are the stories that we tell about ourselves through land,” said Min Sook Lee, one of the OCAD U faculty members who developed the course. “For us it was really an opportune time to think about the history of colonialism and the very idea of Canada itself, established through many untold histories.”

After completing the course in April, students were scheduled to spend the next couple of months creating their own art pieces and performances that will be showcased this summer at the Rouge National Urban Park east of downtown Toronto. This display will be one of a series of contemporary art works by Canadian curators, artists and students installed around national parks and historic sites from June 10 to 25.

While some events aim to deepen people’s connection to the land, others intended to explore the relationships on which this land was built. The University of Victoria held a symposium in February where Indigenous elders translated original B.C. treaties into local Indigenous languages for the first time. After the event, which was held in collaboration with the Songhees First Nation, the university presented the translated treaties to the Royal BC Museum to be kept alongside the English versions.

The importance of the event “is huge and symbolic,” said John Lutz, chair of the history department at UVic and one of the symposium organizers. “[It] alerts us to the fact that these were two alien cultures who had alien interpretations and there was undoubtedly huge misunderstandings built into those negotiations.”

Dr. Lutz added: “I think the 150th anniversary is an opportunity to look forward and say we’ve come some distance from where we were in the 19th century, but we’re still a long way away from having a Canada where First Nations can prosper and be proud and have the same level of success as all other Canadians. And that should be our commitment for the next 50 years.”

The Social Sciences and Humanities Research Council funded the event as part of its Connecting for Canada’s 150th grant series. Among the 51 other events funded was a conference co-hosted by McGill University and Université Laval in March, where panelists assessed the history of the Canadian federal system.

The grant series is intended to stimulate celebrations on university campuses across Canada, said Crystal Sissons, acting manager of SSHRC’s research grants and partnerships division. “Our diverse past will inform some of these projects as they explore where we have been and why, while others will use this history as a catalyst to examine and assess our present and future situations as we look towards the next 150 years of Canadian history.”