University of Winnipeg’s Instagram feed has gone to the dogs

Sadie likes peanut butter and a warm lap. She wakes up early enough to have earned the nickname ‘Rooster.’ And except for the year she tore open all the presents under the Christmas tree, Sadie is a very good girl. The Cavalier King Charles Spaniel, who belongs to Anna Stokke, chair of the math department at the University of Winnipeg, is one of 18 pets featured on the university’s social media accounts as part of the Teacher’s Pet series.

Every few weeks throughout the past year, the university posted a photo of a professor and their pet. The portraits appear with a short profile of the furry friend as a #TeachersPetTuesday post. Erin Heroux, design and creative lead at the university, says the series started as an excuse for the dog-loving marketing and communications team to bring some canine content to their Instagram feed. It quickly grew into a novel way to showcase the university’s faculty members across all social media channels. 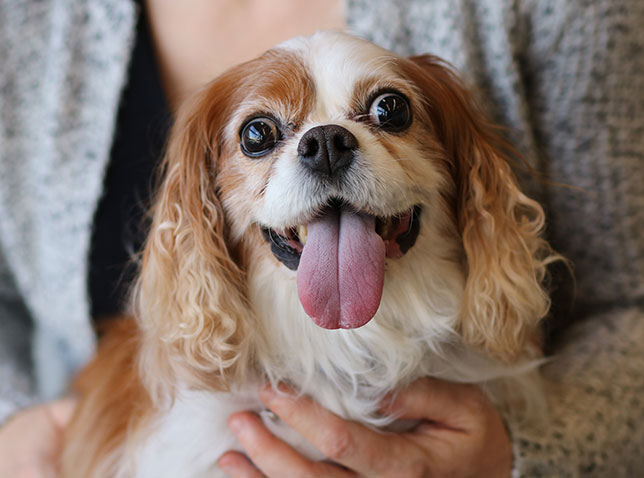 Sadie, the canine companion of math professor Anna Stokke, was one of several professorial pets featured in a year-long social media campaign. Photo courtesy of the University of Winnipeg.

“While the adorable pet photos are the certainly the hook, it’s often the cheeky write-ups about the pet that come from conversations with their owners that really brings this series home,” she explains. “You get a better glimpse into who our professors are.”

Even with pandemic restrictions in place, the team had no trouble finding subjects. Communications officer Naniece Ibrahim, the photographer behind the project, continued to stage photoshoots on campus and in professors’ homes – all while wearing a face mask and keeping a good distance apart. “It is a testament to the warm and welcoming nature of U of Winnipeg’s instructors that they want to share their furry loved one with the wider community,” she says.

The series has been such a hit with the university community that the communications team has curated some of the images into a calendar. Proceeds from sales will help fund student bursaries and scholarships.

Scroll through to see more furry friends from the Teacher’s Pet series: