UTSC, Ryerson and Laurier compete in groundbreaking tournament for women in cricket

Student cricket clubs are emerging as a supportive space for racialized women in university sport.

When Hirra Farooqi decided to put a women’s cricket team together at Ryerson University this past spring, she had no idea how a game she often played in the streets as a pastime would blaze new trails for women in sport on university campuses. This spring, Ms. Farooqi’s squad met up with teams from Wilfrid Laurier University and the University of Toronto Scarborough to compete in what was touted as the first women’s interuniversity tri-series (a three-team tournament) in Canada – and to celebrate a sport that, until recently, has been largely invisible at postsecondary institutions.

Although host team UTSC came out on top in the women’s tri-series, the squads and their captains – Ms. Farooqi at Ryerson, Sarah Laws at Laurier and Perenthaa Arulnesan at UTSC – are supportive of each other, and even encourage each other as they compete. Ms. Farooqi says the players prop each other up and don’t engage in rivalries. “One thing that is really big about starting the university’s first [women’s] cricket team is knowing that you’re starting something that’s going to go forward – not only for yourself but for a bunch of other women as well,” she adds. The squads at Ryerson and Laurier have been around since 2017; UTSC’s team had only been practising together for a month before they won the tournament. 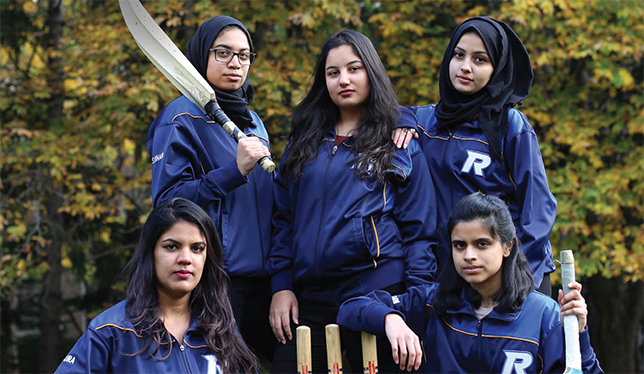 That camaraderie and support extends to the wider cricket community in Canada. For their part, the women’s programs have particularly benefited from the encouragement and assistance of male allies in the campus cricket clubs. “The men’s side supports us a lot,” Ms. Arulnesan says. “We have several girls who were new to the sport and, with the help of the few members of the men’s team, the players were able to learn the sport quickly.”

At Ryerson, Ms. Farooqi says Hussain Jawa, who plays on the men’s team in the university’s cricket club, has been an important champion for the women’s squad. It was Mr. Jawa who approached her to see if she was interested in starting a women’s side, she says, and he later took time every week to teach the women the rules of the sport, and to coach them in technical skills. (The women typically play a modified version of the game with a softer ball and an indoor playing field; however, this spring, Laurier started a women’s hard-ball team.) When they started, the Ryerson squad counted four women, but it has since grown to well over 20, despite only needing 11 players and two substitutes.

Engaging the wider campus community, however, has been “a longstanding obstacle,” Ms. Arulnesan says. Cricket was first brought to Canada by British settlers as a “civilized” game that reinforced the superiority of the Empire; it quickly fizzled out due to seasonal constraints and costs. In the rest of the world, however, cricket has become one of the most played sports, second only to soccer. Now, it is immigrant families, their children and international students that are leading cricket’s Canadian revival. “Cricket is a colonial sport but is dominated by newcomers, so it doesn’t always get the support it needs,” Ms. Farooqi explains.

This tendency to attract players from many ethnic communities, particularly South Asian and East Asian students, means cricket is creating an important space for women of colour in university sport. To maintain and grow that space, Ms. Arulnesan says players need to advocate for more team options on campuses, either at the varsity level or through student clubs. What would benefit cricket most, she says, is to change how and why individual sports get recognized by postsecondary institutions. “I believe that for cricket – and specifically for women’s cricket – to grow, [we need] to minimize the idea that we need hyper-masculine, monopolizing sport empires and instead empower every sport to their maximum potential,” she says.

Each of the women’s cricket teams that participated in the tri-series does receive support from their respective university athletic departments through their campus cricket clubs as well as support from private clubs. But few universities have official student cricket clubs like those at Ryerson, UTSC and Laurier. The players say that for their cricket programs to thrive, it’s imperative that their teams, and the sport more generally, be formally recognized by Ontario University Athletics, the governing body for interuniversity sport in the province.

In the meantime, without the support and structure afforded by sports conferences like OUA or U Sports at the national level, student cricketers are helping themselves through the Canadian College Cricket Association. The CCC is a volunteer organizing body that helps players from roughly 14 teams connect with each other, set up matches and expand the sport. The organization has been pivotal in assisting the three women’s university teams organize test matches and the recent tri-series by helping them with everything from finding equipment and booking facilities to managing logistics and promoting matches.

CCC president Hassan Mirza started the group in 2014. He says that women’s programs and their involvement in the sport are integral to the cricket community in Canada – or anywhere in the world. Mr. Mirza, who came to Canada from Pakistan as a teen, grew up watching the women and girls in his family play and love the sport. “Women play a crucial role in terms of strengthening the program,” Mr. Mirza says. “But my concern is that we get the support we need to continue.” He emphasizes the need to keep the cricket programs running, so the CCC, despite limited resources and staff, is doing its part by lobbying the OUA.

This partnership, he says, would help garner more funding and support from university athletic departments that these student athletes deserve. And with that additional support, Mr. Mirza says, the possibilities for women’s cricket are limitless. “I was shocked to see the talent they have,” says Mr. Mirza. “I have no doubt that if they get good a platform, good opportunities, they can play at provincial levels.”