Veterinary college to ‘test the waters’ with two-tier tuition

Facing an $8-million shortage in annual funding, the Western College of Veterinary Medicine has been forced to look at new revenue options.

As universities across the country are confronted with losses in government funding, the Western College of Veterinary Medicine (WCVM) is trying something different in Canada to make up for a revenue shortage: two-tier tuition for domestic students who don’t make the first round of admissions.

The college, located at the University of Saskatchewan, is a regional veterinary school that has been funded by the four western provinces since its establishment in 1963 and filled through provincial enrolment quotas. Alberta pulled out of what’s called the WCVM interprovincial agreement in 2017 to instead funnel its $8-million contribution into a new veterinary school at the University of Calgary. This has left the college with a big gap in funding and about 25 spots in its doctor of veterinary medicine (DVM) program, which had been previously reserved for Alberta students and subsidized by that province. 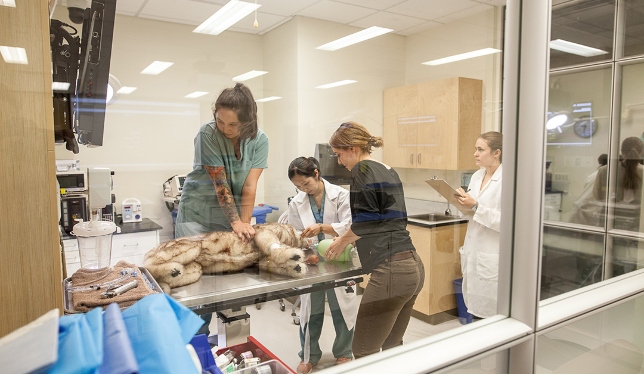 To fill the funding gap and the seats in the program, WCVM will be accepting between 10 and 25 regional applicants for the 2020 academic year who didn’t make it through the standard admissions process. These spaces, however, will come at a higher price – students who register through this admissions stream will pay nearly $60,000 instead of the usual domestic fee of about $10,000 a year.

“It’s unusual for Canada, a bold move to have two-tier tuition,” says Douglas Freeman, WCVM’s dean. But he likens it to “a group of students that were successful at competing for a scholarship and other students who didn’t get the scholarship. And that’s not an unusual situation across higher education.”

The second tuition tier is also on par with tuition fees Canadian students pay at veterinary schools in other countries, Dr. Freeman says. He adds that this is a pilot project meant to “test the waters.” With admission offers scheduled to go out in July, the college will evaluate the outcome – if they were able to attract enough students – and then decide with the provincial governments whether to continue to offer the second tuition tier.

Dr. Freeman says that the college will also accept international students, but the real goal of the pilot is to attract more students from western provinces, a region that Dr. Freeman says is experiencing a veterinarian shortage.

“There are relatively few opportunities for western Canadian students to attend vet school and it is extremely competitive,” he says. “We turn away a lot of talented, really well-qualified students every year because of that.”

According to the Canadian Veterinary Medical Association, WCVM is in a “difficult, unprecedented situation” due to Alberta’s withdrawal from the partnership. The association also notes that many Canadians attend veterinary colleges abroad and pay significantly higher tuition fees and living costs than in Canada. These prospective international students might be willing to pay a little more than standard domestic tuition fees if it means staying in the country. More government funding – as opposed to funding cuts – is needed to make veterinary education accessible for Canadian students, the association adds.

Dr. Freeman says WCVM looked at “a dozen” different proposals to deal with the loss in funding from Alberta and some – such as developing a new undergraduate degree in comparative science and diploma programs to help graduates of foreign unaccredited schools practice in Canada – are still on the table. But “the reality is we’d be having those discussions anyway,” he says.