At the event, teams of Manitoba postsecondary students developed solutions to an issue now familiar to all in Canada’s university sector: how to improve online learning.

Manitoba postsecondary institutions joined forces with the province’s tech incubator to host a virtual hackathon last November that tackled an issue now familiar to students from across the country: remote learning.

Participants in the hackathon, which took place over November 20 to 22, designed tech-based solutions to improve remote learning, with a focus on enhancing student engagement while maintaining academic integrity.

The idea for the virtual hackathon sprung from a conversation between Joelle Foster, CEO of North Forge Technology Exchange, and Rosalie Harms, instructor and department chair in business and administration at the University of Winnipeg.

“Over the summer, we were discussing the challenges of the online learning environment,” Ms. Harms said. When the COVID-19 pandemic reached Canada early in 2020, everyone pivoted to online learning very quickly, she said, and for most, that situation remained throughout the rest of the year.

While they discussed the challenges of online learning and teaching, including assessing competencies and ensuring exam integrity, Ms. Foster suggested a hackathon, Ms. Harms said. The hackathon was organized by a number of Manitoba postsecondary institutions and North Forge with Adam Kozachuk, business development officer in the faculty of business and economics at U of Winnipeg, coordinating the whole thing.

During the 48-hour event, student participants worked on their idea on how to make online learning a better experience, and the presentation of that idea, with mentors from the tech and sectors. It culminated in a pitch presentation where the teams presented their remote-learning solutions in a case competition format to a judges’ panel featuring representatives from the University of Manitoba, U of Winnipeg, the University College of the North, Red River College and North Forge.

A winning idea for remote learning

The winning team was LockItDown. Team members Justin Baldwin, Mack Borys and Francine Camia had previously worked together in an entrepreneurship course at U of Winnipeg. When Ms. Camia suggested they join the hackathon, the other two classmates were quickly on board, Mr. Borys said.

For their project, the group wanted to identify challenges to student engagement, Mr. Baldwin said. They thought about their own experiences with remote learning, asked friends about theirs, then brainstormed potential solutions around the identified problems: lack of student engagement in the course, fewer chances for students to interact with each other and the possibility of academic misconduct while learning remotely. 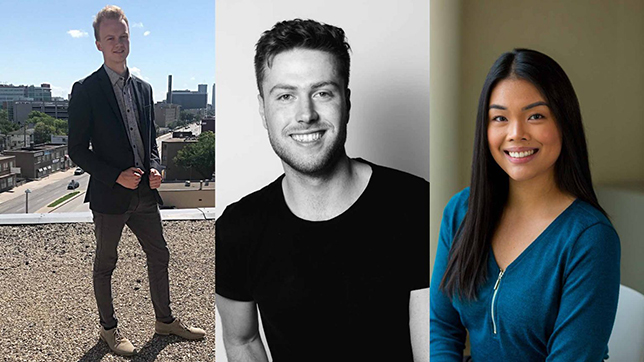 The trio of Mack Borys, Justin Baldwin and Francine Camia won the $5,000 first-place prize at the Virtual Hackathon for their academic software platform to improve online and remote learning. Photo courtesy of UWinnipeg.

“Our solutions were to monitor and track student participation, so that forces them to engage,” Mr. Baldwin said. At the same time, the group wanted their solution to provide an outlet for students to connect on a social level, too.

“It’s the one-stop shop that clearly identifies your role as a student, and prioritizes the importance of engagement as a social being,” Mr. Baldwin said. The idea also solves a problem for instructors by providing a single platform for both instruction and student engagement, instead of requiring instructors to put together solutions via multiple apps. For example, the LockItDown platform (since rebranded as WeLearn) includes features for student interaction that replicate what they might use on a social networking app, like direct messaging and private chat rooms. The winning team’s solution brings together the features of a learning management system like Brightspace with those of social tool like Facebook or Zoom. “Basically, we want to create an online university,” Mr. Baldwin said.

“That was really the premise of the hack – how do we look at this differently,” U of Winnipeg’s Ms. Harms said. “How do we be innovative and creative around creating a community of culture, and an environment that, to an extent, replicates and simulates that on-campus experience, because I think that’s where students are feeling really disconnected.”

Interacting with instructors is one thing, she said, but students are also missing experiences like hanging out together at a coffee shop or in study groups and need venues to do that away from their professors. “That informal connection is so important to the culture of a university and its environment,” she said.

The team also focused on putting together a solution that would be easy for both students and instructors to use. “I think the great thing about the platform is that it combines every feature that people are already familiar with,” Ms. Camia said. They didn’t want to reinvent the wheel by getting rid of features people like – such as video calling and class discussion boards – and they wanted to keep the features familiar to users so that neither instructors nor students would be overwhelmed by learning to navigate an entirely new platform. Instead, they have proposed combining those features in a different way to build community into the existing online classroom environment.

Hackathons are associated with the tech industry, but a computer engineering background was not a pre-requisite for participation in the Manitoba event.

“None of us are computer science students so we have no idea how to even build a prototype, Ms. Camia said. “We were just three business students who had ideas, and we just want to create something good out of it.”

The pandemic will end, but remote learning will continue – and the three students on the LockItDown team hope their idea plays a role in that future. As part of work-integrated learning plan with U of Winnipeg, the team has partnered with North Forge over 12 weeks to develop the project and test its market potential.

“They can go through the North Forge program, develop their app, bring it forward but also receive some university credit,” Ms. Harms said. It’s an opportunity for the students to tie their education directly with work opportunities – in this case, one with the potential to create their own business.