Most graduates seem satisfied with the experience but miss the celebratory aspect afterwards.

They thought that the biggest challenge of their PhD defence would be controlling their nerves. Instead it was securing a quality Wi-Fi connection.

Since mid-March, thesis defences at universities across Canada have gone online. The move brings challenges ranging from security to audio consistency to the downer of being unable to high-five the candidate afterwards. But while it’s different than what they might have dreamed of, most new doctorates are just glad to find a way forward.

When his defence was originally scheduled, University of Waterloo Earth and environmental science PhD candidate Jessey Rice, who is currently based in Ottawa, had intended to stay over at his parents’ house north of Toronto and then make his way down to the U of Waterloo campus for the big day. But as the March 25 defence date approached, plans changed rapidly. By March 19 it was decided the committee would attend remotely and by March 20 it became evident that Dr. Rice and his supervisor, associate professor Martin Ross, would also be calling in. Realizing he’d need a more stable internet connection than what’s available at his parents’ rural home, Dr. Rice relocated to the guest bedroom at his aunt’s place.

Dr. Rice’s dissertation looks at the glacial history of northeast Quebec, the product of three seasons of fieldwork. The defence was held on Microsoft Teams videoconferencing software, chosen partly for its closed captioning functions to accommodate a committee member with a hearing disability. It all went smoothly but for one technical glitch that ejected a committee member briefly from the call. “I was impressed with how smoothly it went,” said Dr. Rice.

YAY! Big thank you to the committee, esp @ChrisClarkofBC and the folks @UWaterloo and @WaterlooSci for making sure the completely remote defence could go forward! And @Roger_Paulen for the support! Awesome project with outstanding people! #PhD #phdchat https://t.co/ZexL6AagxM

His supervisor agrees. “Surprisingly, given the situation, everything went well, better than we had all anticipated as it was one of the first on campus to go online,” said Dr. Ross, adding that it was his first virtual thesis defence in 14 years as a professor. He credited campus IT support personnel, who stayed online for the entire time.

Dr. Rice said he was grateful for everyone coming together to make his successful defence happen, although he missed the body language cues that come from being face-to-face. “There’s always that slight delay with online interactions, and when you’re presenting your PhD, those little silences make you wonder. Not getting instant audience feedback can be tough,” he said.

For Dr. Ross, the biggest change was the social aspect. “Thesis defences are a big part of academic life, an important part of the dynamic of a department,” he said, noting that several students in his research group had planned to attend Dr. Rice’s defence, along with the government research collaborators. “It’s a big milestone.” A week later, Dr. Ross hosted an online celebration for Dr. Rice with his research group. 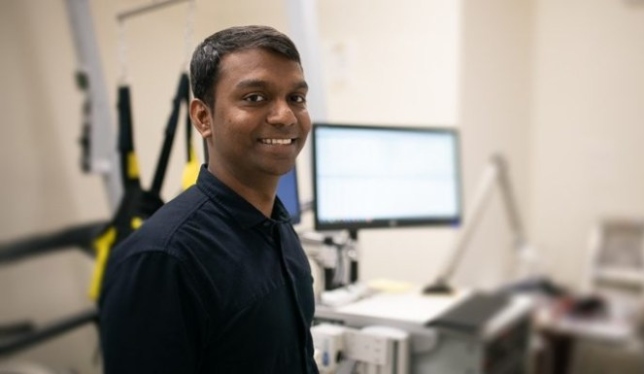 Augustine Devasahayam, a graduate student in the faculty of medicine at Memorial University, was the first student at the university to defend his PhD thesis virtually after the campus shut down in March due to the pandemic. Photo by Richard Blenkinsop.

At Memorial University, a videoconferencing platform called BlueJeans has regularly been used for external committee members, given the challenge and expense of flying examiners to the campus in St. John’s. “When defences went online, we were ready to pivot quite quickly,” said Aimée Surprenant, associate vice-president, academic, and dean of the school of graduate studies at Memorial.

Hamed Tebianian was one of the doctoral candidates whose defence was chaired by Dr. Surprenant. His presentation for his PhD in power electronics generated so much conversation that it went on for much longer than usual, finally ending after more than four hours. “It’s always a pleasure to be in those sorts of defences where everyone is so engaged and excited about the project,” said Dr. Surprenant.

Dr. Tebianian took pleasure in another benefit of the online defence: “The best part was that I had just my shirt on and was sitting in pajama bottoms,” he said with a laugh, adding that he took a photo to commemorate the occasion. Dr. Tebianian defended from his apartment in Boston, where he moved a few months ago to start a new job. The only unfortunate part of the experience, he said, is that he had made plans to meet up with old friends and colleagues when he returned to the university for his defence. “It’s been a long journey and it would have been really nice to be with them,” he said.

Despite being more practiced at defences with a virtual component, Dr. Suprenant said that with so many going online, Memorial has formalized the process even further, sending out a best practices document to both students and examiners ahead of time, and advising students to test their technology the day before.

Updated from the time of SARS

At Queen’s University, Betsy Donald, associate dean in the school of graduate studies, said her team pulled out the plan it initiated in the time of SARS and made some quick updates. Choosing Microsoft Teams as a base platform due to its familiarity among the IT department, they too instituted a best practices document and policies to have IT online for the entire defence. As part of the plan, the whole committee logs on 15 minutes beforehand and there’s a plan B in place with a number to call if the online connection is unsteady. There’s also a procedure for removing the student from the videoconference while a committee discusses the defence (in person, the candidate would be asked to leave the room). 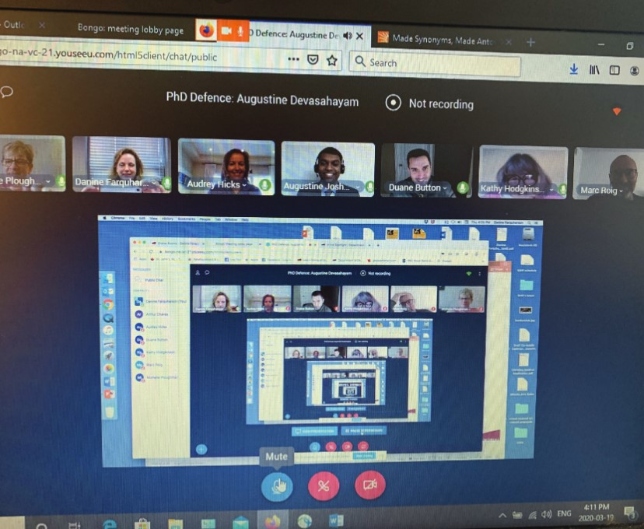 What Augustine Devasahayam’s virtual thesis defence looked like at Memorial University in March 2020.

As of late April, the school had held 49 defences without major complaints. “Everyone’s been stepping up and making sure they’re clear on how everything works so the student feels supported,” said Dr. Donald. “This allows us to focus on the content, not the technology.” The university also established a policy that if the student felt in any way disadvantaged because of the technology they would not be penalized or fail because of it.

Dr. Donald has participated in three defences so far, including facilitating the committee of nine who examined Sanober Umar, the first history PhD candidate at the university to defend on Teams. Dr. Umar, whose research focuses on the impacts of global Islamophobia in the second half of the 20th century, said the best part of her experience was the support from her committee and the validation she got for her work. The worst part was setting aside her past dreams of what her defence would look like.

“I started working on this project five 5½ years ago and in your head you always imagine the defence taking place in a grand exam hall, where you dress in your formal clothes, then at the end your committee members give you a hug and celebrate you and take you out for dinner,” said Dr. Umar, who defended in her one-bedroom apartment. “It wasn’t a big deal because there are far more serious things in life, but it wasn’t what I had visualized. So that was a bit disappointing.”

For now, committees have had to improvise in terms of the festivities. In Dr. Umar’s case, Dr. Donald happened to have some balloons at home which she brought out, along with a “congratulations” sign. In subsequent defences, she’s had her committee members all change their Microsoft Teams backgrounds to balloons.