‘We are in a revolutionary moment’: Canadian academics take part in two-day strike against racism

On September 9 and 10, scholars across Canada paused academic and administrative work to participate in a strike against anti-Black and anti-Indigenous racism in policing.

For two days, Canadian academics put down their pens and books, set their emails to auto-reply and opened their computers to Scholar Strike Canada’s YouTube page, where Black and Indigenous professors and activists held teach-ins as a protest against the recent police killings of Black and Indigenous people in Canada, the U.S. and elsewhere.

“We’re living in the midst of a pandemic, economic crises … [and] a reckoning … with the spate of racist anti-Black, anti-Indigenous police killings, which is, in many ways, a manifestation of systemic racism within our society,” says Scholar Strike Canada co-organizer Min Sook Lee. “We are in a revolutionary moment.”

The first Scholar Strike took place in the U.S. and was inspired by professional athletes who refused to play as a protest against the police killings of Black Americans. Anthea Butler, associate professor of religious studies and Africana studies at the University of Pennsylvania, suggested on Twitter that academics take similar labour action and was key to organizing the strike in the U.S. on September 8 and 9.

I would be down as a professor to follow the NBA and Strike for a few days to protest police violence in America.

Canada’s strike was organized on September 9 and 10 by Ms. Lee, an assistant professor at OCAD University, and Beverly Bains, who teaches women and gender studies at the University of Toronto’s Mississauga campus. Ms. Lee says it was important that Canadian academics participate in their own anti-racism protest that “very specifically [spoke] to the conditions and the realities of anti-Black and Indigenous racist systems and structures in Canada.” It was also important to hold the strike at the beginning of the academic year “to ensure that when classes start this fall, it’s not business as usual.” 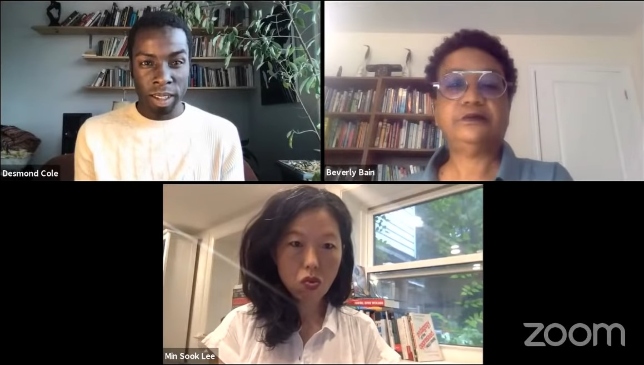 There were also offline Scholar Strike teach-ins at universities such as McGill University, Dalhousie University and the University of British Columbia.

The videos, which gained 60,000 views in 48 hours, were intended to reach a wide audience as a form of public scholarship about systemic racism. “We knew that alongside withholding labor, we needed to … [create] a connection with community… mobilizing [with] what’s happening on the streets, in social movements around the country and around the world,” Ms. Lee says. The lectures are now available on YouTube for anyone to view.

The Scholar Strike Canada website asserts that “statements of solidarity, while important, are not enough,” and that scholars must make several commitments to actively end all forms of racist violence. These commitments include supporting community demands to defund police and redistribute police resources, supporting the demands to remove campus police, addressing the underrepresentation of Black and Indigenous faculty at Canadian universities and creating, expanding and maintaining mental-health and health-care resources for students.

The University of Ottawa was one of many Canadian institutions to support professors who chose to strike. In the eyes of Sylvie Paquerot, an associate professor at the university’s School of Political Studies, this sends a positive message and suggests the university is taking the issue seriously. Dr. Paquerot teaches about systemic racism in her undergraduate and graduate courses on international organizations and global governance, and has noticed that many students are not aware that it’s a problem north of the 49th parallel. “Not everyone understands that this is not just a domestic problem in the U.S.; it is a problem that crosses boundaries,” she says.

But events like the Scholar Strike are opportunities to open eyes to the reality of racism in Canada, especially if the protest finds wide support. “There is a much greater chance of applying pressure on institutions once the issue of discrimination is taken on more broadly than only by the group it targets,” Dr. Paquerot suggests.

To Scholar Strike co-organizer Ms. Lee, academics have a role to play in helping to move society forward by engaging with big societal challenges. “Most people who are paying any attention to the world right now recognize we’re living in the largest, most significant civil rights movement of our times, and we have a role to play as educators, as scholars, as academics and as universities,” she says. “Our job … is not to teach students to get the trains to run on time, it’s to get students to engage with the social issues of our time.”

With files from Pascale Castonguay