Western prof gets students to swim with sharks, virtually

New course is part of a three-year project examining whether emerging technology can help boost engagement in learning.

Swimming with sharks is not usually a recommended activity, but in Paul Mensink’s environmental science class it is about to become a required part of the curriculum. This semester, the Western University professor is having his first-year students explore the physiology and anatomy of the basking shark, the second largest fish in the sea, through an immersive underwater experience. It involves the students being miniaturized and consumed by the sharks, before being excreted as marine snow, a type of detritus, onto the ocean floor.

This technological trick will be accomplished using an application developed by EXAR Studios, an award-winning immersive technology firm in London, Ont. “One of the challenges of studying the ocean is that you can show lots of photos, but you can’t see the scope or the scale,” said Dr. Mensink, a professor of marine ecology who specializes in educational technology and is a teaching fellow in Western’s faculty of science. “The difference here is you actually get to stand beside a basking shark and walk around it, as though it was right beside you. Students will get a sense of how large they can be,” noted Dr. Mensink, who compares the shark’s dimensions to a city bus. “They’ll look inside its mouth and see its tiny teeth and huge gill rakers from the inside. And then they’ll be swallowed whole.” 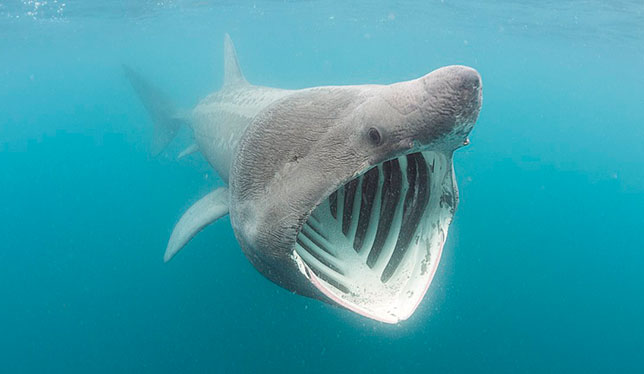 The inspiration for this venture came from another course in which Dr. Mensink takes a select group of third-year students out to New Brunswick each year to conduct studies at the Huntsman Marine Sciences Centre. He found that these oceanside field trips dramatically boosted his students’ level of engagement and wondered if he could import some of that experience into the classroom setting. The answer was to use augmented reality (AR), an enhanced version of the real physical world that is achieved using digital visual elements, sound, or other sensory stimuli delivered via technology.

“We want to try to teach students about marine science in an engaging and motivating way. So, we’re using augmented reality to let them role play as marine scientists. They are active participants. They are collecting data as they go along,” said Dr. Mensink. Students will be required to tag the basking shark and understand the satellite tagging process, as well as identifying some of the threats they face, such as fishing nets and ship strikes, as part of their studies.

The new course is part of a three-year project funded by a US$50,000 grant from Unity Charitable Fund, provided by the San Francisco-based Tides Foundation, that will examine whether immersive technology can help students become more engaged and involved in their learning. “We’re conducting educational research projects alongside the rollout of all of these technologies to understand how they affect student learning in order to help guide that process in the future,” Dr. Mensink said. “We want to use these new forms of technology in a strategic way.”

Immersive tech at other institutions

Realizing that they enable people to access spaces and engage with experiences that might otherwise be unavailable to them, a number of Canadian universities are now experimenting with virtual reality (VR) and augmented reality. Psychology students at the University of British Columbia are learning about the connections between brain and behaviour using a web-based application known as HoloBrain WebVR that blends virtual 3D content with real 2D images.

At Brock University’s Goodman School of Business, a new undergraduate course was recently introduced that focuses on the strategic marketing opportunities of AR and creating AR experiences that maximize customer engagement.

Basking sharks, which grow to eight metres, are found in warm-water oceans worldwide. Despite their immense size, they pose no threat to humans as they are not meat eaters, feeding instead on plankton. They have a long history as a commercially important food fish, as well as being harvested for shark’s fin soup, animal feed, and liver oil. However, overexploitation has reduced their populations to the point where they have disappeared entirely in some areas and are threatened in others. On Canada’s Pacific Coast, basking sharks were brutally eradicated by the Department of Fisheries and Oceans between 1955 and 1969, as they were perceived to be a nuisance species because they kept getting tangled in fishing nets. 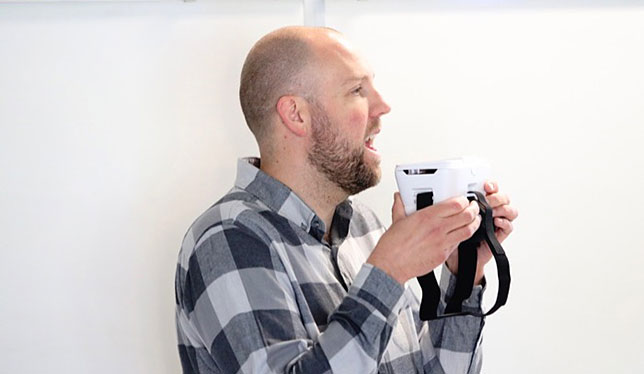 Learning about that ugly history will be part of Dr. Mensink’s course, as environmental sustainability is a major theme. The first-year class has 250 students, including many from non-scientific disciplines, such as music and art, and Dr. Mensink regards this as an opportunity to encourage these students to enjoy and to become more engaged with science.

“I’m trying to expand these types of technology into other courses in my role as a teaching fellow in the faculty of science,” said Dr. Mensink, who can easily imagine augmented reality being used to enhance teaching in a variety of subjects, including anatomy. “I could put a beating heart in front of students using their smartphones and have it hovering over their desks. They could then move and manipulate as if it were a 3D model.”

Dr. Mensink said that the administration at Western has been very supportive of his ideas and has indicated that it wants to stay abreast of these emerging technologies. “My singular goal is to have these new technologies used in every course across the campus. There are no limits to this,” he said. “We’re starting to try to build interdisciplinary initiatives that will allow students from across the campus to work together using these technologies. Things like designing an art exhibition in augmented reality or using augmented reality to create art or attaching history to a specific place and having an AR experience there. So, there are many options and we’re really just at the very beginning of it.”