What are the unwritten rules for riding the bus? This UBC prof wants to find out

A Q&A with sociologist Amy Hanser, who’s gone undercover on public transit to discover how long is too long to stare at a fellow bus rider.

When riding a public bus, most of us deliberately avoid paying attention to our fellow passengers. Amy Hanser, a sociologist at the University of British Columbia, is ignoring this convention for her new SSHRC-funded study, “The Public Bus as Urban Space.” As part of the project, Dr. Hanser is taking the bus around Vancouver in hopes of observing some of the other unwritten rules of public transit.

University Affairs spoke to Dr. Hanser about her research. The interview has been edited for length and clarity.

UA: What is it about the bus that made you want to study it?

AH: I have been riding the bus for at least 20 years and have long been fascinated by how people behave there, and the theater of it; you get to watch all these people and their interactions.

From a sociological perspective, the bus is interesting for a couple of reasons. One is that it’s a space where you’re expected to keep to yourself, and yet you have to be really conscious of the people around you. There’s a tension between this proximity to other people and this expectation of privacy.

Buses also move through neighborhoods. People get on, people get off and buses take on the character of the neighbourhood as they move through the city. It has occurred to me that the public bus is potentially one of those rare places in a city where lots of different kinds of people mix. 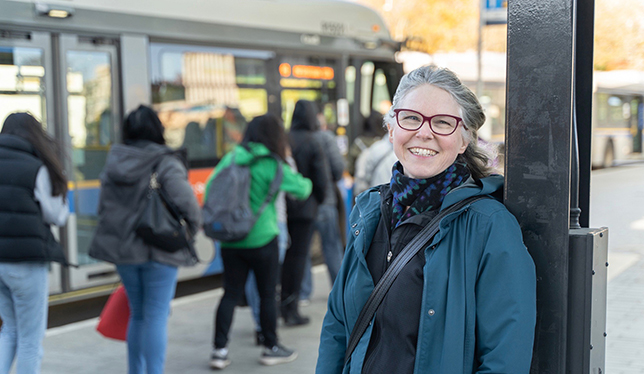 UA: What are you hoping to find out with this research?

AH: I’m interested in what people actually do on the bus – what the rules are and what happens when they’re broken. People don’t often remark on it, but the bus is generally a space where people extend a lot of courtesy to one another. In addition, I’m interested in how people navigate those encounters with strangers, and which kind of encounters they find most challenging.

UA: Why is this research important?

AH: I think it helps us understand how people experience the city. I think it tells us a lot about how people navigate encounters with strangers, sometimes those who are different from them, in the city. But I’ve come to realize that there’s also a value to providing the public with tools for making sense of their interactions on the bus.

UA: How do you plan to go about your research?

AH: I haven’t done this kind of research before. I’m not a transportation scholar and I’m not even really an urban sociologist, it’s just an idea that I’ve had for many years now. I’ve chosen a couple of bus routes, and I ride from one end to the other, making notes about what I see. Then I’ll do a small set of interviews with a range of bus riders.

UA: What are some of the “unwritten rules” of riding the bus you’ve already observed?

AH: One of the most obvious things is that if the bus isn’t crowded, people are very diligent about spreading themselves out. Most people on a bus that has lots of open seats won’t sit right next to another rider. It’s clear that providing other people space is important. There are also all sorts of rules about who gets a seat, who you offer a seat to and when. But I think the most important rule is to not focus your attention inappropriately on other people, and yet be ready to turn your attention to someone if the situation requires it.

UA: It’s almost like you’re breaking that final rule as you do your research.

AH: Totally. But what’s interesting is that I’m watching people, but I don’t want them to know that I’m watching. And so, it reveals how the bus is a space where you can be attentive to other people, but you have to do it in a way that doesn’t disrespect them. So, I’m not staring at people for too long.