Young leaders reflect on the legacy of the province’s largest-ever student protests.

A decade later, University Affairs took the pulse of Quebec student movements to see how they have evolved.

Alexandre Guimond was on the frontlines of the Maple Spring protests as they unfolded. He attended many demonstrations, including more than a few that turned violent. Today, he is the chief executive of the Université de Sherbrooke Master’s, Diploma and Doctoral Student Association. He said that 2012 was a turning point in his involvement in student movements.

“The 2012 strike really sowed the seeds of my awareness. It was my political awakening. Without it, I’d still be a hockey-playing douchebag! I attended a couple of protests every day,” he said. 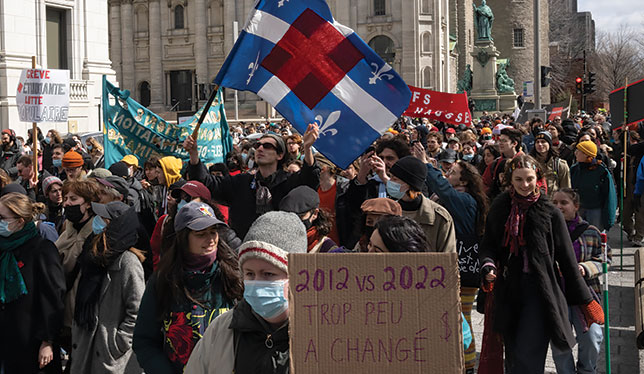 Students march through the streets of Montreal to mark the 10th anniversary of the Maple Spring protests. Photo by Ryan Remiorz/The Canadian Press.

Mr. Guimond believes student activism has bottomed out since then. “With the pandemic, it really fell off a cliff. Aside from environmental protests, it’s really tough to mobilize students. And at the graduate level, our members are even harder to mobilize,” he added. He also believes that putting social activities on hold due to the pandemic has had an impact, since in normal times they serve as springboards to activism. Mr. Guimond added that the student movement is divided between two branches: research and lobbying on one side, and activism on the other. While the former is doing relatively well thanks to the professionalization of student associations, the latter is somewhat less active.

“It would take a major move from the government, like increased tuition, to bring them back together,” he said.

Samy-Jane Tremblay, president of the seven-year-old Quebec Student Union (UEQ), has also observed a drop in student involvement. Despite that, she remains optimistic. “The return of in-class learning gives me hope. The student movement is very strong and continues to thrive. As ever, it can improve conditions for students,” she said.

Ms. Tremblay also feels that students today would mobilize to fight a new threat to their interests.

However, according to Mr. Guimond, it is easier to rally students to react to government actions. “It’s harder to mobilize students to go on the offensive for new gains. But I don’t think it would be hard to mobilize them to defend past gains.”

These two differing branches have led to division within the student movement, Mr. Guimond said. Although the UEQ provides strong support for research and lobbying, he thinks that students would also benefit from another organization focused on activism.

Mr. Guimond and Ms. Tremblay both agree that while tuition remains a key issue for the movement, its concerns have evolved to include fighting climate change and other priorities.

“The student movement is a reflection of society’s current issues,” Ms. Tremblay said. “The environment is one that UEQ has been working on since its founding. You quickly understand how the student movement is involved when you look at fossil fuel use by the university sector. It is Quebec’s third-largest greenhouse gas emitter.” The president of the FECQ, Samuel Vaillancourt, agrees that there has been a diversification of the positions taken by students. “Student movements have broadened the range of subjects they address. For example, we added climate justice and a number of other social trends that may less directly impact students but still affect the society young people live in,” he said.

According to Mr. Guimond, if there is a lesson to be learned from the Maple Spring, it’s the use of social networks to organize protests. The pandemic also helped popularize platforms like Zoom and, by extension, rapid meeting planning.

Although he was just 12 years old during the events of the Maple Spring, Mr. Vaillancourt believes that its events can have considerable influence on his student organization. “Internally, when we talk about various issues, we sometimes compare them with what they did in 2012,” he said. “We look at what was effective and what can be done differently. It’s a point of reference for how we carry out actions.”

For Ms. Tremblay, while the Maple Spring may have influenced some aspects of the UEQ at the time of its founding, it no longer really has an impact on its daily operations. But the events of a decade ago are certainly not forgotten. “It’s always important to remember our history and learn from the past. The 2012 student-led protests were the largest of their kind in the province’s history. And they produced results,” she said. “There are lessons there for a post-2012 world.”