With more than 150,000 kilometres already logged, the mobile Flux Lab keeps on trucking

From state-of-the-art research trucks to drones and satellites, Flux Lab uses an arsenal of tools in its quest to measure greenhouse gas emissions across Canada. 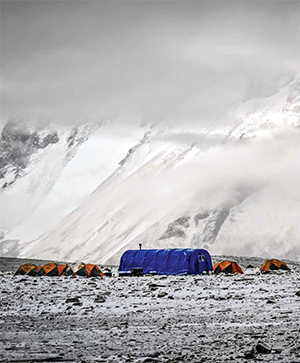 Some of the Flux Lab’s earliest work took place
in the Antarctic. On this 2015 trip captured here,
the team went “sniffing” for microbial activity in the
Upper Taylor Valley of Antarctica. Given the presence
of water locally, it’s a nice place to study soil microbial
activity etc. Photo by Dave Risk.

In Western Canada’s oil and gas fields, Dave Risk’s trucks have become a familiar sight. These mobile labs, which resemble the trucks used by storm chasers and cost $250,000 each, trundle around the oil sands in Alberta, British Columbia and Saskatchewan to detect and measure rogue methane and carbon dioxide emissions from oil and gas operations and equipment.

“They can detect leaks from kilometres away, track them down and measure the rate of emissions,” says Dr. Risk, an earth sciences researcher who runs the Flux Lab at St. Francis Xavier University in Antigonish, Nova Scotia. Besides the trucks, the Flux Lab team also uses drones, satellites and handheld monitors to track and measure gas leaks, both natural and human-caused.

Dr. Risk originally began measuring gas emissions for ecological studies, monitoring the loss of methane and CO2 from thawing permafrost. He and his students still occasionally do that work in far-flung locations around the world including Norway, Alaska, Siberia and Antarctica. “Both kinds of work use the same basic tools,” he says, “so it’s easy for the students to move back and forth.”

A measurement equipment “party” in 2014, during a short field season in the cold deserts of the McMurdo Dry Valleys, Antarctica. Photo by Chris MacIntyre.

Lab members Lynsay Spafford and Katlyn MacKay measure soil gases during a 2016 trip to the Aquistore Carbon Capture and Storage site in Saskatchewan, the most comprehensive full-scale geological field laboratory for CO2 storage in the world. Photo by Jennifer Baillie.

But the lab is best known for its work in the oil and gas sector. The industry has recently begun to show more interest in tamping down its emissions, especially accidental ones, so the lab has been kept busy gathering benchmark data to figure out how much gas is leaking, and where. “There seems to be an appetite to reduce methane emissions in the industry,” says Dr. Risk. “But without the baseline data that’s hard to do.”

So Dr. Risk’s students have been criss-crossing the oil patch, travelling 150,000 kilometres to map and gather data on 10,000 sites over the past two years. They now have what is probably the most extensive information on all of Canada’s oil and gas developments. One goal is to figure out which developments, and which kinds of equipment are the most prone to leaks. So far they have found that it is aboveground gear, like pumpjacks and storage tanks, rather than pipelines that are responsible for most of the leaks.

And there are a lot of leaks. The industry estimates that it releases enough methane into the atmosphere to power Montreal, but Dr. Risk says his team’s calculations suggest that emissions are even higher. “It’s an active area of study,” he says.

The lab is supported by an unconventional funding mix, says Dr. Risk. It has projects supported by the Natural Sciences and Engineering Research Council, the David Suzuki Foundation, federal and provincial regulators, and major oil and gas companies. “Normally companies, regulators and NGOs don’t talk to each other,” he says. “We’re contracted by all of them and talk to all of them, which is unusual. It’s a unique ecosystem.”

Dr. Risk’s students are also an unusual mix, coming from a wide range of disciplines including environmental science, engineering, mathematics and earth sciences. But one thing they all have in common is a passion to help reduce greenhouse gas emissions. That and the ability to handle large quantities of data. “Some background in computing, and numeracy, is important,” he says. “Being able to handle data and numbers is part of the discipline these days.”