Women academics worry the pandemic is squeezing their research productivity

Struggling to juggle myriad responsibilities, “the easiest thing to put off … is research,” says one professor.

University of Alberta associate professor Carla Prado colour-coded her overwhelming number of work-from-home tasks on a white board. The next time she looked at her to-do list, her toddler had doodled all over it, making it unreadable. Previously, her daughter, who turns two in July, jumped on her lap during a Zoom meeting and yanked at her shirt, nearly pulling it off.

This is what academic work looks like during COVID-19 for many women. “I don’t have enough time anymore,” says Dr. Prado, who holds a Campus Alberta Innovates Chair in Nutrition, Food and Health and is director of the human nutrition research unit at U of A. Dr. Prado trades off childcare duties with her husband during the day and often works in the evening until 1 a.m.

Dr. Prado estimates she’s working at about 70 percent of her normal capacity. With her lab closed, she’s writing up papers for which the research is complete, supporting her grad students and attending virtual meetings. “I am not keeping up with the literature,” she says. “I can’t write a grant proposal.” She worries this will impact her lab’s funds in future. 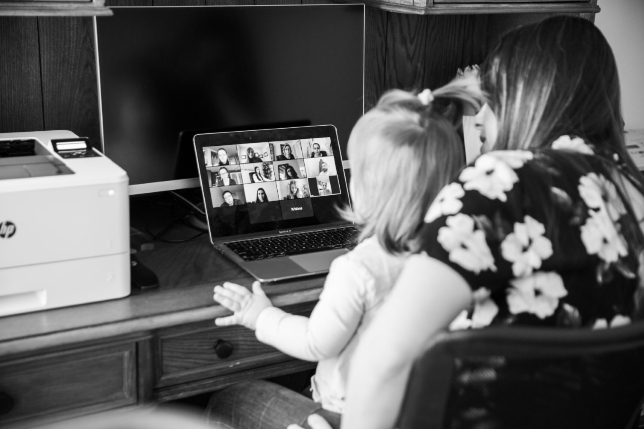 U of A professor Carla Prado has a special guest – her daughter – helping her out as she works from home. Photo by Rafaella Roriz.

Men also struggle to keep up with their work during COVID-19 – researchers across the board have seen their labs shuttered and fieldwork cancelled. Yet, on balance, it appears women in academia are seeing this pandemic squeeze their research time more.

“The easiest thing to put off, because it doesn’t have an immediate deadline, is research,” says Sofia Ahmed, a professor of medicine at the Libin Cardiovascular Institute at the University of Calgary. She and her husband, who also works in health care, share home schooling support for their three children, the youngest of which is 10. Dr. Ahmed also does clinical work with patients with kidney disease, a group at risk for poor COVID-19 outcomes.

“Many women like me are finding the time they used to spend doing research is now being spent playing Super Mario Brothers,” says Megan Frederickson, an associate professor of ecology and evolutionary biology at the University of Toronto, who’s sharing care of her six-year-old son with her husband, a full-time student. “It’s hard to write a sophisticated grant application when every 30 seconds someone is coming in to ask, ‘Where are my socks?’” She’s writing up papers that were already well underway, but is behind on a book project. “The longer I delay it, the more I’ll have to go back over sections again. And there’s a chance that some other book-length work will come out on the same subject in the meantime.”

In May, Dr. Frederickson published a study on GitHub – she also explained it in an article for The Conversation – in which she analyzed submissions to STEM-focused preprint repositories arXiv and bioRxiv during March and April of this year compared to last. Everyone submitted more papers in 2020, but the number of male authors grew faster than women, causing her to conclude that women researchers are falling behind.

A similar analysis was conducted by professors Philippe Vincent-Lamarre and Vincent Larivière in the school of library and information science at Université de Montréal, along with colleague Cassidy Sugimoto at Indiana University. They observed “lower rates of submissions from women for March and April 2020, compared with both the preceding two months in 2020 and the same two months of 2019.”

Looking specifically at economics research, one report published on Medium found that the number of women’s working papers dropped by three percentage points in April and five more in May, compared to the previous two years. A study in Vox found that that while female authors submit 20 percent of working papers to economics databases, they author just 14.6 percent of papers on COVID-19 (which is where all the money and attention is these days). The U.S. publication The Lily had a researcher compare preprints in astrophysics from January to April 2020 to those of previous years, revealing “up to 50 percent more productivity loss among women.”

“Kids want their mommy,” says Dr. Frederickson as one reason behind the research output change for women. “Some kids have taken all of this very hard, and that emotional labour falls disproportionately to moms.” Domestic labour does too: a recent Statistics Canada report found 61 percent of women do the majority of the laundry and 56 percent head up meal preparation. Another from Statistics Canada shows women still do more childcare, spend more time on average with their kids, and often combine parenting with other tasks. Adding to this, male academics are four times more likely to have a stay-at-home spouse than female academics.

Since many faculties have tried to improve diversity in recent years, female faculty tend to skew younger – perhaps with small children – as do those of colour and from other marginalized groups related to gender, sexual identity and disability. Women may also take on more service roles at universities, or so found a 2017 study, which can be very demanding, especially now with the ongoing pandemic.

This slowdown in women-led research may or may not be temporary, but either way it compounds existing disadvantages. Dr. Frederickson studied awards from the Canadian Foundation for Innovation and found the median award amount for male researchers was seven percent higher than for women’s projects. A 2019 Lancet study led by Holly Witteman, an associate professor of medicine at Université Laval, showed that women researchers were less successful in landing Canadian Institutes of Health Research grants. She suspects women have fared poorly with CIHR’s rapid grants for COVID-19 research, as they entail dropping everything to write a proposal in a week. Indeed, only five of the lucrative biomedical grants went to projects led by women in the March round of awards.

“All these little things, they make a difference,” says Dr. Witteman, noting that studies of academic success show that small additional advantages like early grants snowball into more success over time. Dr. Frederickson worries that female graduate students, postdocs and young faculty members whose work has been impacted by COVID-19 could feel the effects throughout their careers.

In response to this well-documented problem, many universities in Canada now allow researchers to stop their tenure clocks if the pandemic has impacted their research. CIHR has revised its spring 2020 Project Grant competition, allowing for financial extensions. On June 10, the Natural Sciences and Engineering Research Council announced it was looking into how to accommodate the repercussions of COVID-19.

Dr. Witteman would like to see universities, governments and funding agencies do better surveys about the impact of the pandemic on researchers, none of which seem to ask about disabilities. As someone with type 1 diabetes, she is unwilling to let her two children return to school, although schools reopened in Quebec in May, and she is not sure when she can safely return to her lab once it reopens.

In any event, delaying tenure and grants won’t help many women researchers to keep up – those with young children will just end up with a long string of tenure pauses and no other support. It’s a complex problem with roots in a person’s family situation and other factors. “I would like to see some good, concrete solutions,” says Dr. Frederickson. “But I’m not sure what they would look like.”