This snapshot of employment outcomes confirms that, regardless of their discipline, U of T PhDs are successful in a wide range of careers.

When Nicholas Dion graduated from the University of Toronto in 2012 with his PhD in religion, he made a surprising career move – he turned down two academic positions and accepted a paid internship as a researcher with the Higher Education Quality Council of Ontario, or HEQCO, a policy think-tank and advisory body to the Government of Ontario. In part, this decision was due to the uncertainty of the academic job market. Tenure-stream positions were in rare supply and the prospect of seemingly endless contract faculty positions was not appealing.

But are career moves like Nicholas’ really that unconventional? One of the key issues facing universities, departments and their PhD students is the lack of high-quality employment outcome data. Where exactly do PhD graduates in the new millennium find employment?

The 10,000 PhDs Project, an initiative of the school of graduate studies at U of T to improve the graduate experience, used Internet searches of open-access data sources such as university, government and company websites to determine the current employment status (as of 2016) of the 10,886 PhDs who graduated from U of T from 2000 to 2015 in all disciplines. A similar methodology was used by HEQCO in their study of 2009 PhD graduates from Ontario universities. The U of T study successfully located 85 percent of PhD graduates. Cross-checking departmental data records with publicly available website information located a further three percent, bringing the total percentage of found PhD graduates to 88 percent.

Increase in U of T PhD graduates

In 2005, the Government of Ontario provided additional funding to universities to increase graduate enrolment by some 14,000 spaces and again in 2011 by 6,000 additional spaces. This increase in funding resulted in PhD enrolment in Ontario universities doubling from approximately 10,000 in 2000 to 20,000 by 2013. Enrolment expansion was driven by certain imperatives: the double cohort of undergraduates (in 2003, Ontario eliminated Grade 13 and therefore doubled the number of students who would graduate starting in 2007); baby-boom faculty retirements (projected to cause a faculty shortage); and the perceived need for highly qualified personnel to drive economic innovation.

The number of U of T PhD graduates increased 1.8-fold from 494 in 2000 to 901 in 2015 (Figure 1). The largest increase was in physical sciences (2.6-fold), followed by life sciences (2.2-fold) and then social sciences (1.4-fold). The number of humanities graduates remained constant at about 100 for each year from 2000 to 2015. U of T attracts a diverse set of graduate students from Canada, the U.S. and around the world. Together, international students and permanent residents comprised approximately one-third of PhD graduates during the study period. 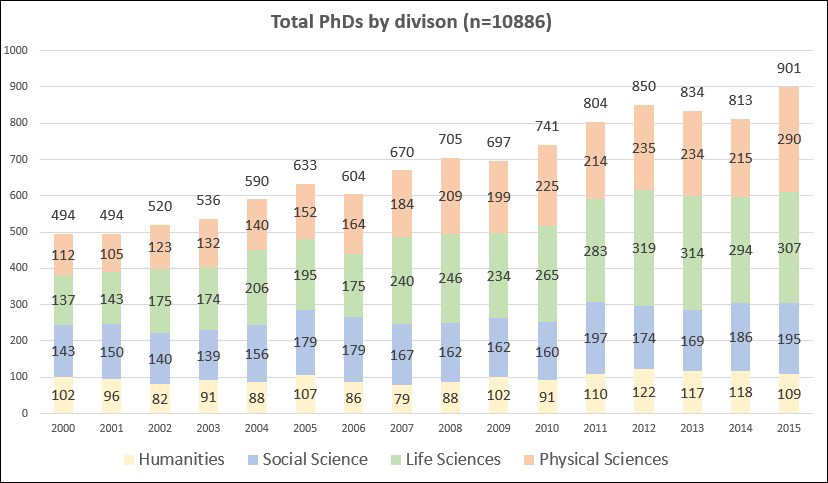 PhD graduates find jobs in a variety of sectors 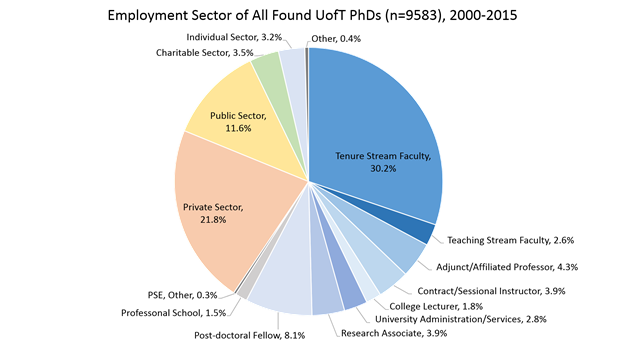 Figure 2: Employment sectors of all found U of T PhD graduates (n=9,583), 2000-2015. Areas shaded in blue are within the postsecondary education sector.

Just over 30 percent of PhD graduates from 2000 to 2015 currently hold tenure-stream faculty positions within the PSE sector. This percentage varies with graduate division, the highest value being in the humanities and social sciences (42 percent and 41 percent respectively), followed by physical sciences (26 percent) and then life sciences graduates (21 percent). Graduates also found employment as college lecturers (1.8 percent) and as contract/sessional instructors (3.9 percent), most commonly in the humanities and social sciences. Others work in the PSE sector as full-time research associates (3.9 percent) or in university administration (2.8 percent). Eight percent of all found PhDs, mostly recent graduates (2011-15), are continuing their training as postdoctoral fellows. Other recent graduates (1.5 percent) are in professional schools (medical, dental, law, etc.).

U of T graduated about an equal number of female (49 percent) and male PhDs (51 percent) from 2000 to 2015. The percentage of female PhD graduates varied by division: 24 percent in physical sciences, 55 percent in humanities, 56 percent in life sciences and 65 percent in social sciences. Forty-six percent of those currently employed as tenure-stream faculty are female, while 54 percent are male.

Areas of employment in the private sector

Where in the world are U of T PhD graduates employed?

We were also able to determine the current employment locations of 9,583 graduates. The data suggest that there is a net “brain gain” for Canada. Seventy-five percent of Canadian citizens and a combined total of 46 percent of permanent resident and international PhDs are employed in Canada. Canadian citizens are also employed in the U.S. (17 percent) and outside North America (eight percent), often as postdoctoral fellows. The project also tracked the locations of international students who found employment outside Canada. Further findings showed that the majority (68 percent) of Americans found employment in the U.S. A similar percentage (67 percent) of Japanese citizens returned to Japan. Twenty-four percent of Chinese citizens remained in Canada; 21 percent returned to China and 24 percent went to the U.S. Forty-five percent of postdoctoral fellows are employed in Canada, 35 percent in the U.S. and 21 percent internationally.

The snapshot of employment outcomes provided by the 10,000 PhDs Project confirms that, regardless of their discipline, U of T PhDs are successful in a wide range of careers, from academia to industry, the public sector and beyond. Sharing such data has many benefits. It can encourage graduate administrators and faculty to assess how well academic programs and professional development programs are preparing students for their futures. Crucially, it can also help prospective and current students gain greater knowledge of the diversity of employment outcomes available to them. For this reason, U of T is providing access to these data through a dynamic dashboard on the graduate school website. Surveys and interviews with alumni will also be carried out to learn more about individual career trajectories and to communicate these widely.

As Brandon Ho, a PhD student in Biochemistry at U of T, stated: “There are misconceptions concerning postgraduate school. I think having results from the 10,000 PhDs Project will give current students a clearer idea of what to expect after their graduate career and will be a beneficial resource in helping prospective students in their decision-making process.”

Reinhart Reithmeier is a professor in the department of biochemistry at the University of Toronto and was special adviser to the dean of the school of graduate studies from 2015 to 2017.

This article is a summary of a 10,000 PhDs Project Report submitted by the author to Joshua Barker, dean, school of graduate studies and vice-provost, graduate research and education at the University of Toronto. The author and team members wish to thank Locke Rowe, former dean of the graduate school (2014-2017), for his support of this initiative and Linda Jonkers from HEQCO for advice on data collection. This research project was carried out by: Reinhart Reithmeier, project leader; Liam O’Leary, research co-ordinator; Corey Dales, IT Support and data integrity; Abokor Abdulkarim, Lochin Brouillard, Samantha Chang, Samantha Miller, Wenyangzi (Ann) Shi, Nancy Vu, Xiaoyue (Grace) Zhu and Chang Zou, research assistants, with financial support provided by the school of graduate studies.