The internet has changed the way scientists communicate with their funders, the public and each other.

This article is republished from The Conversation under a Creative Commons license. Read the original article.

Scientists are active on social media, discussing everything from methods to the latest developments in research. They even use social media to raise funds. Scientists sometimes provide mentoring online and have conversations with more junior researchers about their careers. Social networking tools also provide a space to build both social and professional networks, allowing scientists to develop new collaborations.

Dismissing online science communication as trivial to the intellectual work of scientists would be a mistaken position.

Face-to-face scicomm isn’t necessarily the most impactful. Social media (for better or worse) is incredibly effective at eliciting behavioural change (getting ppl to buy stuff). It can also reach those disengaged and who may not otherwise have access to science. #cspc2018

Crowdfunding platforms, such as Experiment, allow everyday people to fund scientific research and include features similar to those found in traditional grant proposals. Crowdfunding proposals, however, also include features of social media, such as biographies explaining not only credentials, but personal interests and passions.

As public funding becomes increasingly difficult to secure, some scientists are looking to alternative venues. However, crowdfunding also illustrates how problems arise online, too.

Questions about ensuring accountability, managing ethics and regulating funds need to be considered. Further, although crowdfunding can be useful for those starting out, the levels of funding cannot compete well with publicly funded research support.

Crowdfunding may also rely on already powerful social networks, which is something that is not available to everyone, and can further reinforce barriers. Acknowledging how access to platforms can be reliant upon one’s social and professional connections rather than their science is important.

Crowdfunding isn’t the only funding mechanism that faces such questions. Public funding and private funding is subject to questions of accountability, ethics and regulations.

Online science communication is not only for popularizing science, but an important space to address serious problems within science, too.

High-profile scientists and science popularizers have been revealed to have been supported by financier and convicted sex offender Jeffrey Epstein. Researchers at the Massachussetts Institute of Technology and Harvard University received funding from Epstein. Others benefited from his connections to publishers for book deals.

Details continue to emerge, but it’s clear at this point scientists and science communicators have benefited from private funding implicated in the exploitation of children. At the moment, scientists and journalists are calling out this unethical behaviour, notably on Twitter, and calling for changes to how powerful networks in science operate.

We shouldn’t reduce MIT to only Epstein. His crimes are odious but we should investigate the structural dependence of our research and culture on private wealth (without transparency). I once researched where art galleries got their money and ended up at Mugabe.

Because the ways we communicate about science tell us about the broader culture of science, expectations for scientific conduct, ethics and norms, it’s important to examine these new forms of communication. 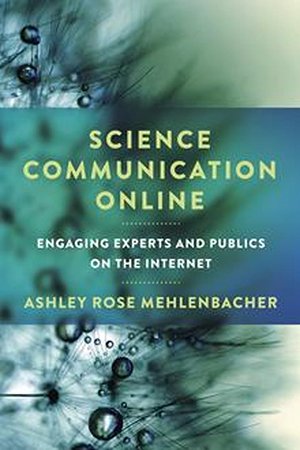 The book examines how the internet is changing
how science is communicated. Cover from
the Ohio State University Press.

Blogs are one example of this. Some communicate more technical information, others discuss events and still others discuss matters pertinent to scientist training. Other blog posts help explain complex science to the public.

A future for online science communication

Science communication online is dynamic. Understanding the new ways we can communicate about science requires immersion in the conversation.

That conversation isn’t just for scientists. Online spaces, too, can serve broader purposes. Consider the news aggregate website Reddit’s “Ask Me Anything” series, where scientists regularly answer questions about their work. University of Waterloo doctoral researcher Devon Moriarty, a colleague of mine in rhetorical studies, has found that in such spaces, people have sophisticated criteria for assessing a scientific expert’s credibility. Online science communication allows for more of dialogue between scientists and those interested in their work.

Science enthusiasts can look to online spaces to learn more about scientific subjects, the process of science, vetting scientific claims, learning about the scientists themselves, and even participating in scientific research.

Ashley Rose Mehlenbacher is an assistant professor at the University of Waterloo.