I can’t breathe: feeling suffocated by the polite racism in Canada’s graduate schools

For some of my peers and colleagues, the last few months have been their first exposure to racial protest and the civil rights movement. However, as a woman of Caribbean descent, these ideas are nothing new. I have personally witnessed and experienced various forms of racial discrimination, racial stereotypes and social categorizations. I began a PhD in sociology as a means to better understand why so many people in my life have “other’d” me, (mis)categorized me, or labeled me as not a “real Canadian,” challenging me to explain my heritage.

As September 2019 rolled around and I began graduate school, I was eager to start this new journey, invested in succeeding in my courses and enthusiastic to pursue my research interests. However, as the first semester progressed, I began to realize that my graduate school environment was ill-suited to helping me better understand the questions I was trying to answer.

First and foremost, I observed a glaring disconnect between the student body and members of the faculty. I was one of a few Black graduate students being taught by many white professors. Despite a larger Black student body at the undergraduate level, I could see our dwindling numbers as I looked up the organizational hierarchy. I, yet again, felt alone – alone in my thinking, alone in my academic journey, alone in my research vision. 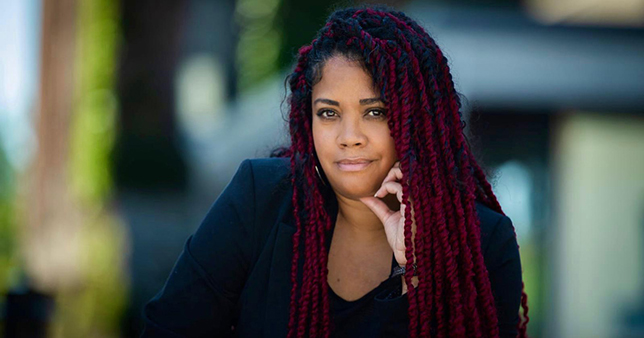 Karine Coen-Sanchez. Photo courtesy of the University of Ottawa.

Galvanized by this desire not to feel alone, I conducted a survey of 76 racialized students and administered a series of panel discussions for Black, Indigenous and other students of colour, led by me and other BIPOC students. My objective was to provide a safe space and the opportunity for racialized students to express their thoughts and experiences in postsecondary institutions.

What I found was that I was not alone. Many of us had received messages that we shouldn’t question the racism that was targeted towards us. Many of us had been told to minimize our experiences, to avoid conflict, to see our stories as an exaggeration of reality. We weren’t believed if others around us “didn’t notice” or “weren’t a direct witness to it.” If we got angry or frustrated at not being believed, we were admonished not to take it so personally.

I was not alone in feeling like I couldn’t breathe, that I was being suffocated by white supremacy, through condescending and sarcastic remarks when discussing anti-Black racism in Canada. Our survey found that 47 percent of respondents reported having experienced racism during their postgraduate studies and 65 percent reported being unsure if their academic institution has a formal reporting mechanism for incidences or acts of racism. Indeed, when asked if they ever reported an incidence of racism, 94 percent responded no! Students felt that reporting racism “causes more repercussions/problems” or is “pointless.”

These results disturbed me and indicated a need for action. I decided to create an anti-racism committee for graduate students in the faculty of social sciences and I called on my department to address racism in our classes and on our campus. For example, I worked to create an obligatory inclusivity statement for the faculty to include in all course syllabi.

What has been particularly frustrating in this work is the “polite racism” so typical of Canada. Yes, Canada has always provided the image of being at the forefront of liberal immigration laws and the promotion of multiculturalism. However, there is a lack of discussion of institutional racism and how it is so very polite in Canada.

Although Canadian racism may not be as explicit as that of our neighbors to the south, the learned racism here often consists of psychological gaslighting by denying the experiences of racialized people of being ignored, overlooked or undervalued with a smile. These experiences are continuations of our time in the public-school system. Author Robyn Maynard, in her 2017 book Policing Black Lives: State Violence in Canada from Slavery to the Present, has drawn telling connections between institutionalized racism in Canadian policing and the treatment of Black students within the educational system: ‘‘Black students are portrayed as potential criminals instead of children being nurtured’’ (pg 230).

I was particularly disappointed by those in my discipline of sociology who seemed unable to apply the tools of the discipline to decode and reflect upon the issue of racism on their own campus in the way they applied their sociological lens to more distant social issues. I entered my doctoral program to submerge myself in the body of knowledge that emerges from research in order to work to shape a better society. Evidently the aforementioned would be onerous to accomplish with a lack of sociological reflexivity and inclusivity, uniformed curriculum violence, white supremacy and anti-Blackness epistemic. Social inequalities are maintained as the status quo and are embedded in institutions of higher learning. How can this be rooted out if our sociological imaginations refuse to look?

Only through our collective efforts to recruit and retain Black and racialized faculty members can we fully ensure the success of Black and racialized students in higher education. We must decolonize the teaching of social theory and research methods, and develop training and protocols for increasing anti-racist awareness. But, ensuring that this training endures requires that people with “skin in the game” be in positions of power that will see that it happens.

These issues are not unique to my department or university, however; racism in Canada is ubiquitous. As lawyer Hadiya Roderique wrote in an article in the Globe and Mail in 2017, Black Canadians need more experience to be seen as equally qualified as their white peers. As she writes, “companies say they want diverse candidates, but the numbers don’t bear the claims out.”

Sociological theorizing can help explain these patterns as being partly formed by collective memory. In 1950, sociologists Robert Merton and Paul Lazersfeld coined the term homophily – a “pervasive tendency of people to associate with others who are similar to themselves” (pg. 22). It is the notion that people consciously or subconsciously gravitate to others who share similar educational backgrounds, social class and economical status. Homophilous relationships can be easily observed in many different social structures/institutions. If people tend to gravitate towards people they feel are more like themselves, how is the growing body of racialized students to find support and supervisors when the professoriate is disproportionately White? How can we begin to break through homophily if racism remains hidden behind a veneer of Canadian politeness, and if academic institutions fail to turn research findings of their own departments onto themselves?

By openly sharing our experiences, BIPOC students are growing a space for collaboratively addressing racism in all our spheres of influence – starting from within our departments and disciplines. Those who are dedicated to anti-racist work must continue to listen and to work collaboratively to deconstruct the social structures of whiteness and white supremacy that normalize the suffering of racialized people. Ideally, we must challenge and unscramble anti-racism to reinforce policies and structures in our universities, in our teaching, and in our research, in order to promote the need for systemic change. I no longer want to be the subject of racism; I want to be a bridge that connects two different worlds and two different realities to one common thread of social being.

Karine Coen-Sanchez is a PhD student in sociology at the University of Ottawa. She would like to recognize Mona El-Mowafi and Phyllis L. F. Rippey for providing valuable feedback on this article.