Report shows uncertainty surrounding non-academic positions, in addition to the quite reasonable impression they do not provide massive remuneration, argues political scientist.

Since 2008, the number of assistant professor positions, the first permanent academic appointment for PhDs, has diminished by around 15 percent in Canada. Even as secure academic positions dwindle, the majority of PhDs continue to prefer academic employment, and pursue poorly paid temporary academic positions in their efforts to obtain tenure-track positions. Contra appearances, this is not unreasonable, because the non-academic options are no better. A comprehensive new report from the Council of Canadian Academies lays out why. The whole report is worth reading, but I summarize a few key findings below. 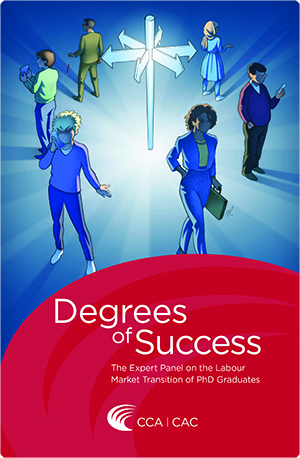 Canada has been running a great experiment for the last two decades. Its private sector does not employ many PhDs compared to peer countries like Australia and the U.S. In fact, Canada lagged behind these countries in producing PhDs per capita two decades ago. It was not clear whether this was a problem of supply, not enough PhDs, or a problem of demand in which Canadian employers did not want to hire PhDs.

If it was the former, there was also an output gap – the lack of PhD graduates meant a shortage of skilled labour for Canadian companies, which were either paying too much for that labour, or, put off by the high cost of skilled workers, foregoing investments in innovation. If this logic were true, boosting PhD production would enable Canadian companies to hire more skilled workers at a lower cost, thereby increasing Canadian innovation and economic growth.

To find out whether it was a problem of supply or demand, the federal and provincial governments expanded funding for graduate study. From 2002 to 2017, the number of PhDs produced in Canada went from 3,723 to 7,947. Meanwhile, the number of assistant professor positions in Canada rose from 8,646 in 2002-03 to a peak of 10,986 in 2007-08, and then diminished over the next 10 years to the 2002-03 level (there were 8,661 assistant professors in Canada in 2018-19). While there is no measure of assistant professors hired per year, I estimate there is one assistant professor position for each five or six PhDs produced in Canada. It’s important to note that some of those positions are filled by non-Canadian PhDs, hence the rate of new PhDs being hired as assistant professors in Canada is likely lower than the report’s estimate of around 20 percent of PhDs in the labour force being tenure-track faculty. However, we now have enough data points, nearly 8,000 PhDs a year, to answer the question.

The answer is that it is a problem of demand. We know this because, in the most important finding of the report, as PhD production has increased, the wage premium to PhDs over master’s degrees has diminished. In 2006, it took men with PhDs eight years to make up for lost earnings – cost of graduate study as well as the opportunity costs of foregone employment – than if they had started working after a master’s degree. In 2016, it took men with PhDs 16 years to catch up. Women catch up quicker, but at a lower level of income for both PhDs and master’s.

Read also: The mismatch continues between PhD holders and their career prospects

If the problem was one of supply, the wage premium would have not changed, because the extra PhDs would have moved into new, well-compensated jobs. Quite simply, the pool of well remunerated jobs has not expanded to the degree that the number of PhDs has.

This is where the finding that most PhDs prefer academic to non-academic employment begins to make sense. This is not, as the report states, a problem of academic culture where students are indoctrinated to the virtues of university employment and the vices of the non-academic workplace. It is instead, an acknowledgment of the greater uncertainty surrounding non-academic positions, in addition to the quite reasonable impression they do not provide massive remuneration.

That PhDs prefer academic employment despite worsening odds of that employment is not unreasonable, because the alternative is worse. The private sector does not need PhDs enough to pay them for the time spent to earn their degrees. At the current rate of PhD production, many graduates will not end up with the employment of their choice, nor a well-compensated alternative. For almost a decade, PhDs have shown they are willing to bet years of their youth on the unlikely prospect of academic employment. They will not end the experiment. Over to university administration and faculty.

Arjun Chowdhury is an associate professor of political science at the University of British Columbia.