UOF: a one-year-old institution that is already resilient

The Université de l’Ontario français is the culmination of a long struggle on the part of the province’s francophone community.

Editor’s note: this response to Creso Sá’s recent column, “How cancelling the UOF backfired on the Ford government,” was too long to publish as a Letter to the Editor in the next print edition of the magazine, so we are publishing it here.

Indeed, the Ontario government’s announcement to cancel the Université de l’Ontario français (UOF), as part of its November 15 fall economic statement, was a hasty decision that was not preceded by any dialogue with the university or Ontario’s French-speaking population.

As Creso Sá quite rightly points out, the UOF was no longer a proposal, but a reality. Since 2017, its construction was well underway.

Its board of governors and a small administrative team were fully operational.

Its first set of academic flagship programs were developed and submitted for approval, thanks in particular to a network of approximately 100 professors and experts.

Its set of policies and by-laws was growing quickly.

The short-term site for its campus was identified and the lease was awaiting approval.

It had received approval for its budget from Treasury Board.

The mobilization of students and community partners was well underway.

A second set of academic programs, in professionally regulated fields, responding directly to labour market needs, was being developed in partnership with other universities.

It must also be noted, as Dr. Sá acknowledges, that the UOF has taken root in Toronto’s francophone community. It has also been supported by francophone communities in Ontario and across Canada, as demonstrated by the community-led movement following the Ontario government’s unfortunate announcement. An Ontario university governed by and for francophones does indeed represent an aspiration that dates back several decades. 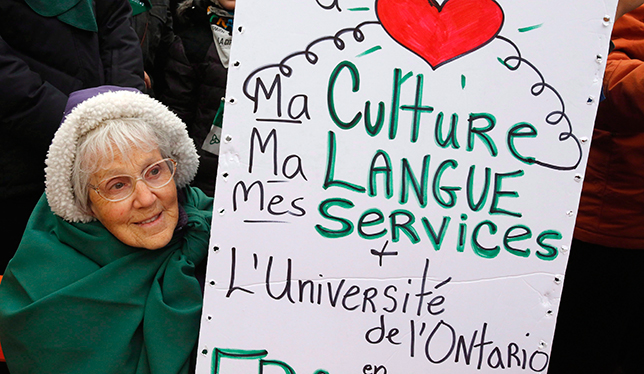 Franco-Ontarians protest cuts to French services by the Ontario government in Ottawa on Saturday, Dec. 1, 2018. Photo courtesy of The Canadian Press/Patrick Doyle.

It is surprising, however, that Dr. Sá describes the project of creating a French-language university in Toronto as a weak policy proposal. In addition to being the culmination of a long struggle on the part of the francophone community, this project is based on a comprehensive study of the needs of Central-Southwestern Ontario, the aspirations of community, economic and political leaders, the demand for 21st-century skills and the best pedagogical practices from around the world.

Taking this state of affairs into account, the UOF was conceived not only as a French-language university, but also as a 21st-century university. It would cater not only to the local French-speaking population, which will in the next few years constitute half of Ontario’s francophones, but will also make use of its location in Toronto to attract significant numbers of international students, students from elsewhere in Canada, and create economic, academic and cultural linkages to other areas of the world.

The UOF is not burdened by tradition or bogged down in a heavy institutional structure that prevents it from designing itself as a “University 2.0.” The UOF has integrated principles of collaboration, innovation, diversity and social usefulness throughout its programming and organizational fabric.

Every learning activity offered by the UOF will be transdisciplinary, experiential and inductive in nature and will aim to develop the skills required of the next generation of leaders. The UOF will take advantage of digital opportunities to provide its students with “third place” spaces (tiers-lieux), whether they are in downtown Toronto, or elsewhere in the province or around the world. The UOF will connect students directly to the real world of employment and community engagement.

As for the UOF’s immediate future, in the wake of the November 15 announcement, there is no shortage of solutions to continue to develop its francophone presence in research, knowledge mobilization, innovation, community development and training.

It is the hope of the French-speaking community that the provincial government will avoid the historic mistake of attempting to cancel an entire university – something that, to our knowledge, has never been experienced before in Ontario.